Well.....we're nearing a year since the Great Eastern Japan Earthquake/Tsunami. 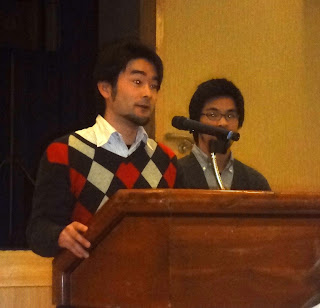 Kondo Sensei grew up in a town in Fukushima. His home was 5 K from the plant. He shared about watching television on March 11th and seeing his friends, teachers, family, class mates running down the streets. He speaks of being allowed to go home for four hours.  He shared many stories and it was moving.


Kondo Sensei is the coordinator of the 3.11 Iwate Church Network.  Teams go down to the most stricken coastal areas regularly. He said more than "things" - the people simply need someone to with which to talk.

Before the Tsunami communities were shut tight - very close knit. He said you could live in them for 20 years and still be considered a foreigner. NOW....communities are open...but he shared the people are still "closed" and "empty".  So his words to describe this area of Japan is "Open but empty".

For 20,000 March 11th was the day life ended. For those who survived but lost their family, homes, jobs, communities etc...March 11, 2001 was the day that time froze. They're stuck in a new and painful realith without hope. Many have committed suicide, many are considering it. Thus Franklin Graham's "Celebration of Hope" and "Tohoku Hope". Kondo Sensei and his staff are building relationships with these who have lost so much and are praying that the Holy Spirit will flow in to their lives and bring new life and hope.

The Kondo family has a new baby born 2 months ago....I can't remember the Greek word they named him - but it means "flow in"... and is used in Scripture to describe when the life of Christ flows in and takes over our life....He shared  how the tsunami flowed in.....and left many empty...but we are believing for the life of Christ to flow in. May it be. 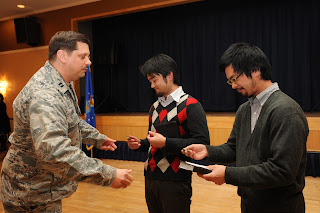 Labels: Tsunamis and other Disasters