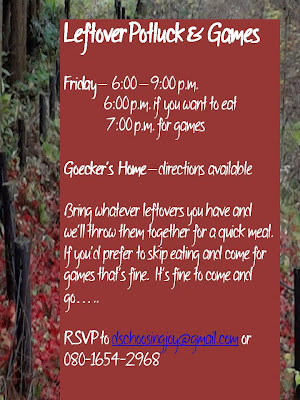 The above was a result of a really good idea I heard at MOPS. Invite families to come over and bring leftovers, play games...great fun....the house is already clean from company on Thanksgiving day. We planned to do this. I made an invite. I forgot to email the invite or give it out.  (Michael helpfully points out this happens more often when I'm taking the yellow pill! I'm also COLD all the time when I take the yellow pill.) In any event, I forgot. This frustrated me as this is our last Thanksgiving here and it would have been so fun.....

BUT I did invite the R family and they were happy to come over. We had a blast. VERY low key. I told them they know they are like family when we invite them over for leftovers and eat off  paper plates...and THEN I fed them a vegan Deep Dish Cookie Pie.

The kids played flashlight tag with the neighborhood kids until we called them in.

We ate. We visited. We signed the table cloth. Arielle will embroider the signatures (years are color coded). We bring this out every Thanksgiving and our only regret is that we didn't do several for various holidays...We decided to have the J family sign yesterday and the R family tonight because it's still Thanksgiving 2012 in our book. 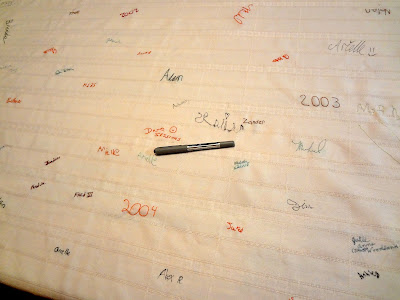 We had a lot of fun looking at signatures from years' past...and this year...Zander signed his name in a new way - with a FLOURISH - as "Alex" and not Zander.


We decided to play pictionary tonight. We divided into Gender Segregated teams and we hoped we could pull it out as it isn't a brainy game like trivia or scrabble. Michael and Jim have the distinct advantage in those sorts of games. The Awesomeness took on the Bearded Dragons....I'll leave you to decide which team was which. ::snort::


We had a blast with Jim, Marvie, Alex and Ashley.  We  wonder if we can start a "games" small group. ::snort::

And that Garbanzo Bean Deep Dish Pie.....the adults were skeptical but a picture is worth a thousand words...I'll be making this again - I wouldn't call it healthy but it is vegan and it is good! 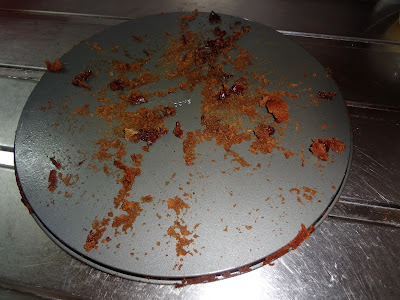 Joyfully Penned by DeEtta @ Courageous Joy at 4:10 AM