Farewell to a Brother

It was only a few months ago that my brother, Mike, collapsed on the golf course with no apparent warning.  In the subsequent medical evaluations, it was discovered  he had an inoperable brain tumor.  The doctors reckoned that he would have 6 weeks on the short side to three months on the far side.  He used up every bit of the three months and then some.  My brother, Mike...  I should explain.  My father was married and divorced before he met my  mother.  This woman, Rella, already had two children, Robin and Mike, from a previous marriage.  My father, Earl, spent a great deal of time raising Robin and Mike.  Earl and Rella had two children, Earl Jr. and Kathy.  In the break up of their marriage, Earl Jr. and Kathy went to Rella.  My two sisters and I came along from my dad, Earl, and my mother, Mary.  I learned in later years that my name is a bridge between these generations in the family - Michael Earl...  So, Mike was Big Mike, and I was Little Mike - until that generated more questions than was helpful in ID'ing us since I became the taller of the two of us.  The new name was Mike the Elder and Mike the Younger.  All that is to say, my brother, Mike, truly fit the title "Mike the Elder."  He was a rock in the family.  He was wise and gracious in his relationships.  I enjoyed spending time with him and his pretty wife, Paula.  Mike was also a retired Chief Master Sergeant.  You could see this in his bearing and in his speech.  He always had a confidence and a level of professionalism that I truly respected and admired. 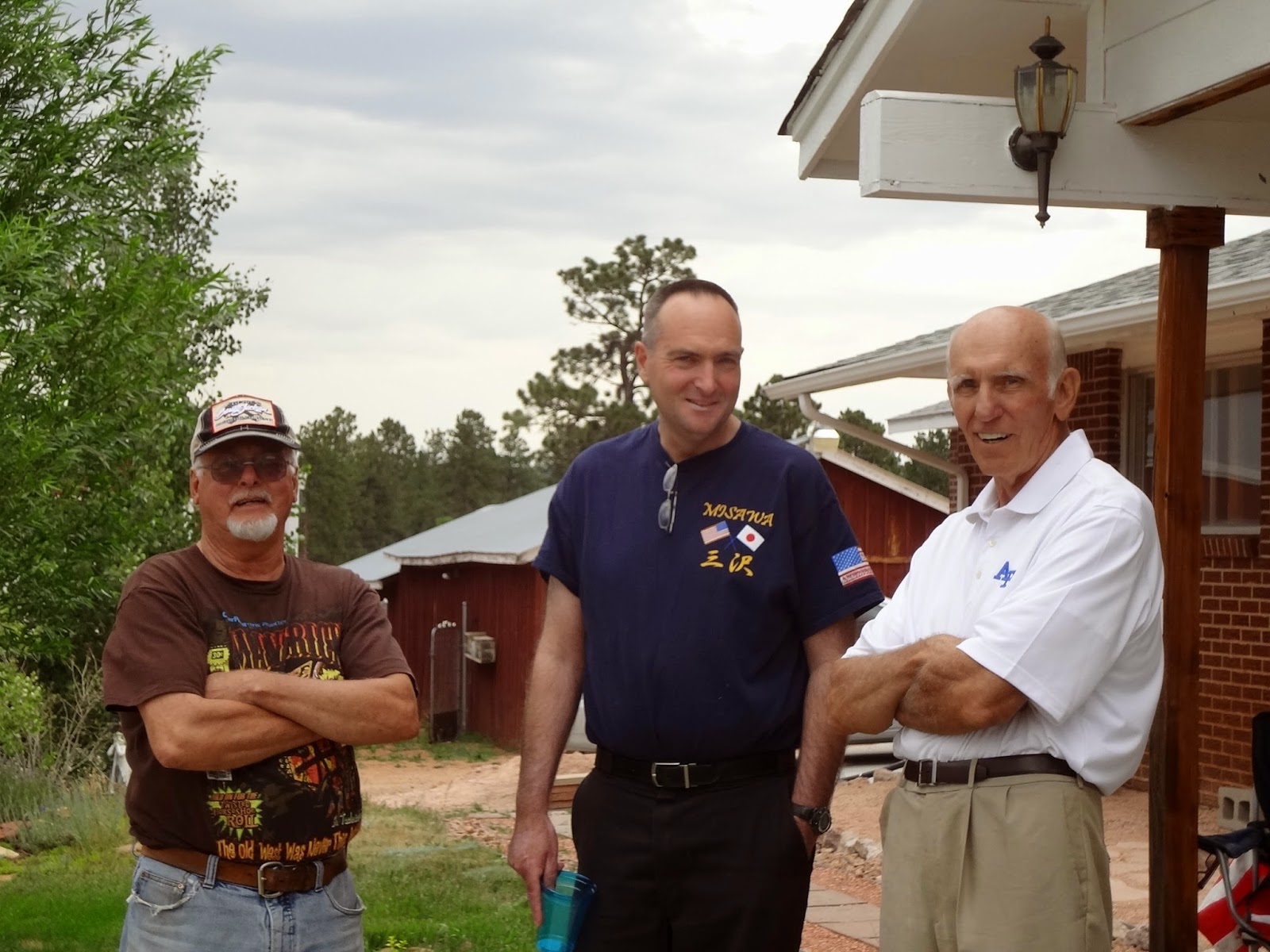 Earl Jr., Mike the Younger and Mike the Elder in CO a couple of years ago
When Earl Jr. called to let me know that Mike had passed away, I knew I needed to go out to bid him farewell.  It took a bit of time to get everyone together for the funeral (Mike's son, Mike Jr. was in the middle east), but I headed out of town on 28 December for the vigil service that evening, a funeral service on 29 December and a graveside service on 30 December.   There is no doubt - I will miss my brother, Mike. 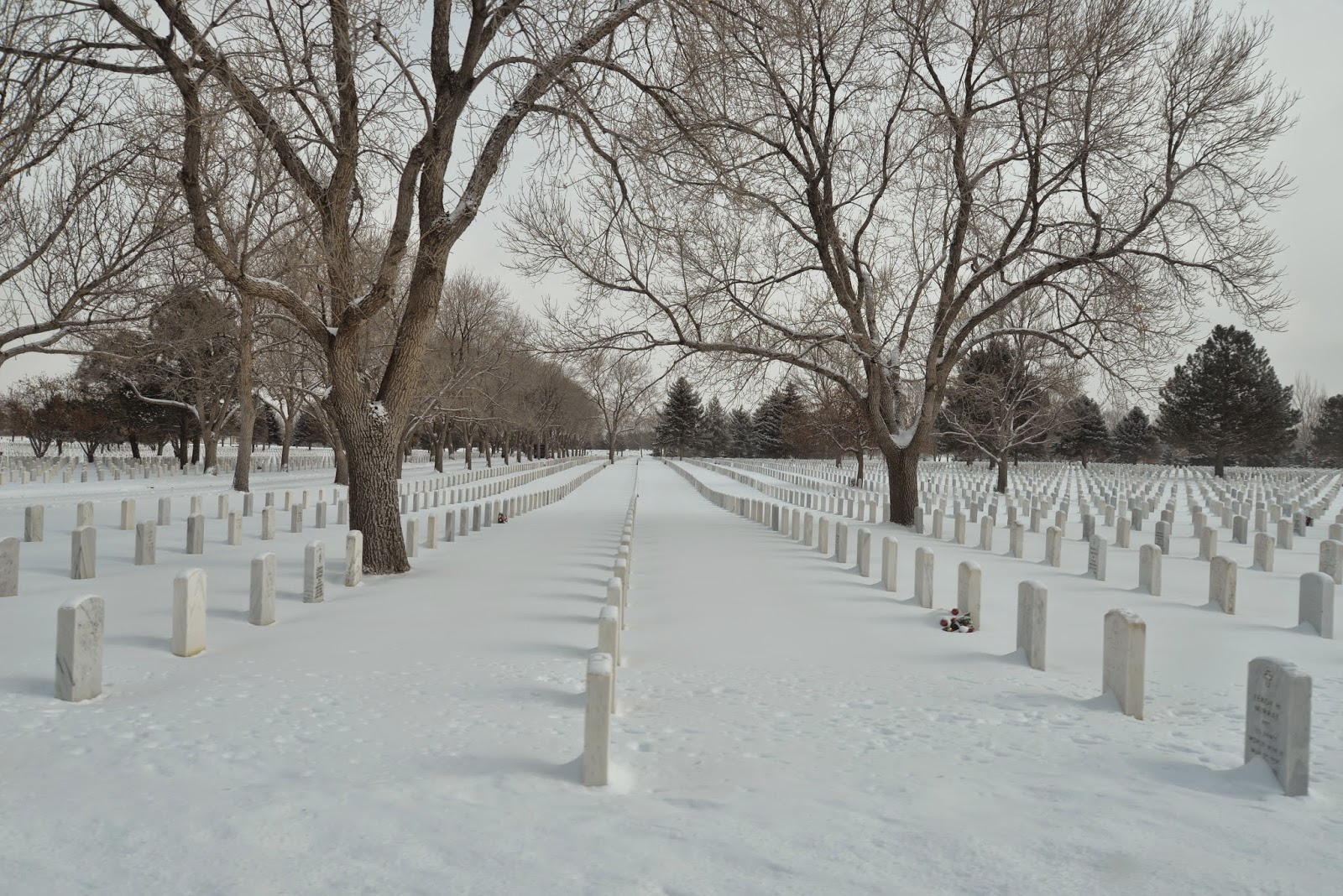 It was a very cold day.  Temps were hovering around 0 F.  The contrast between the life Mike led and day's weather is stark, but even so, the honor he deserved for a life well-lived transcended the day's  very cold weather. 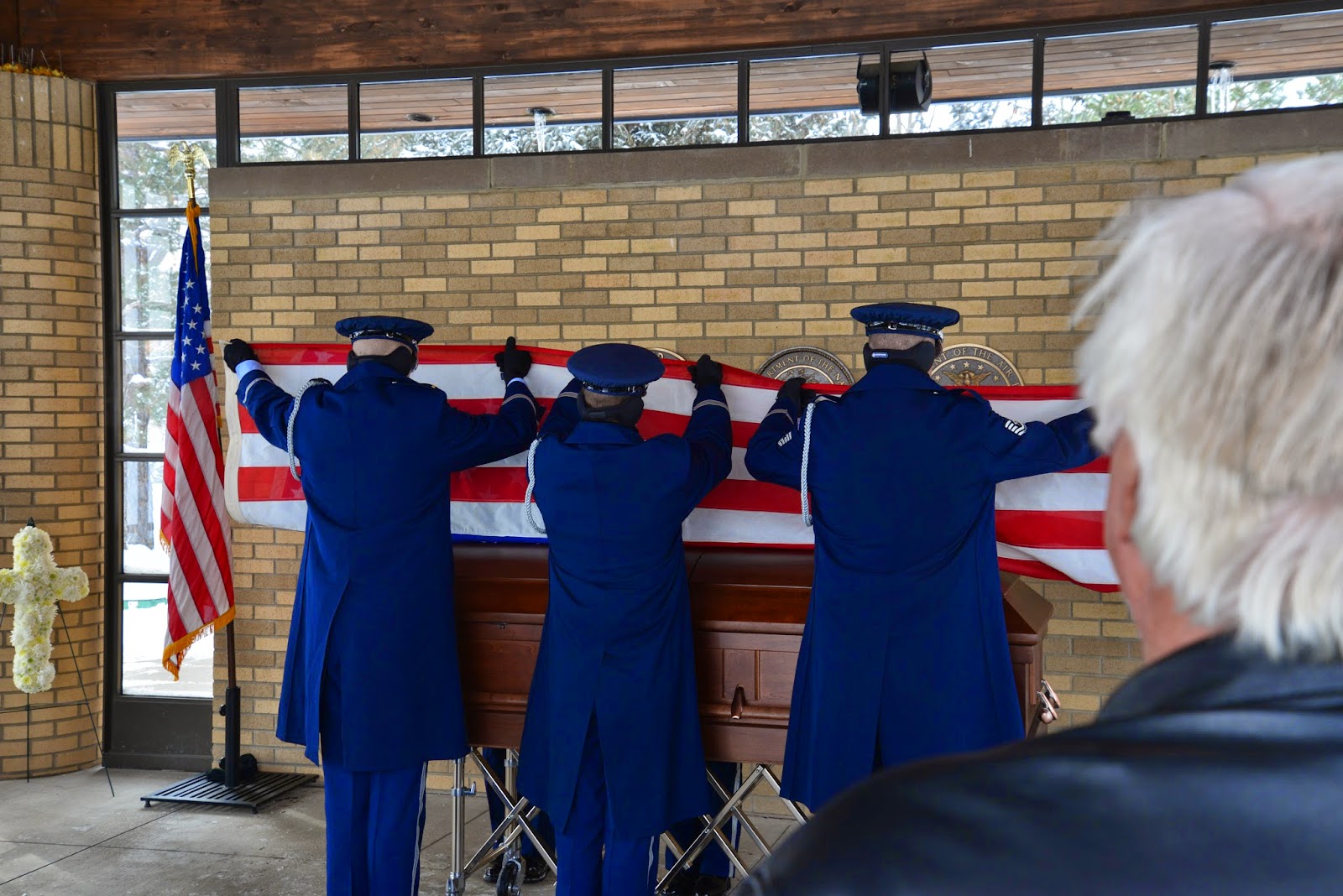 This is one of the Pavilions at Ft Logan, Colorado where the "graveside" ceremonies take place.  As it turned out, it was the same one that we used 2 years ago at my father's graveside service.  Here, an Air Force Honor Guard folds the flag.  After this, Taps was played and then the flag was presented to Paula, Mike's wife.  The emotions of the moment is hard to describe.  There is a finality to it that takes your breath away.  It is the final farewell. 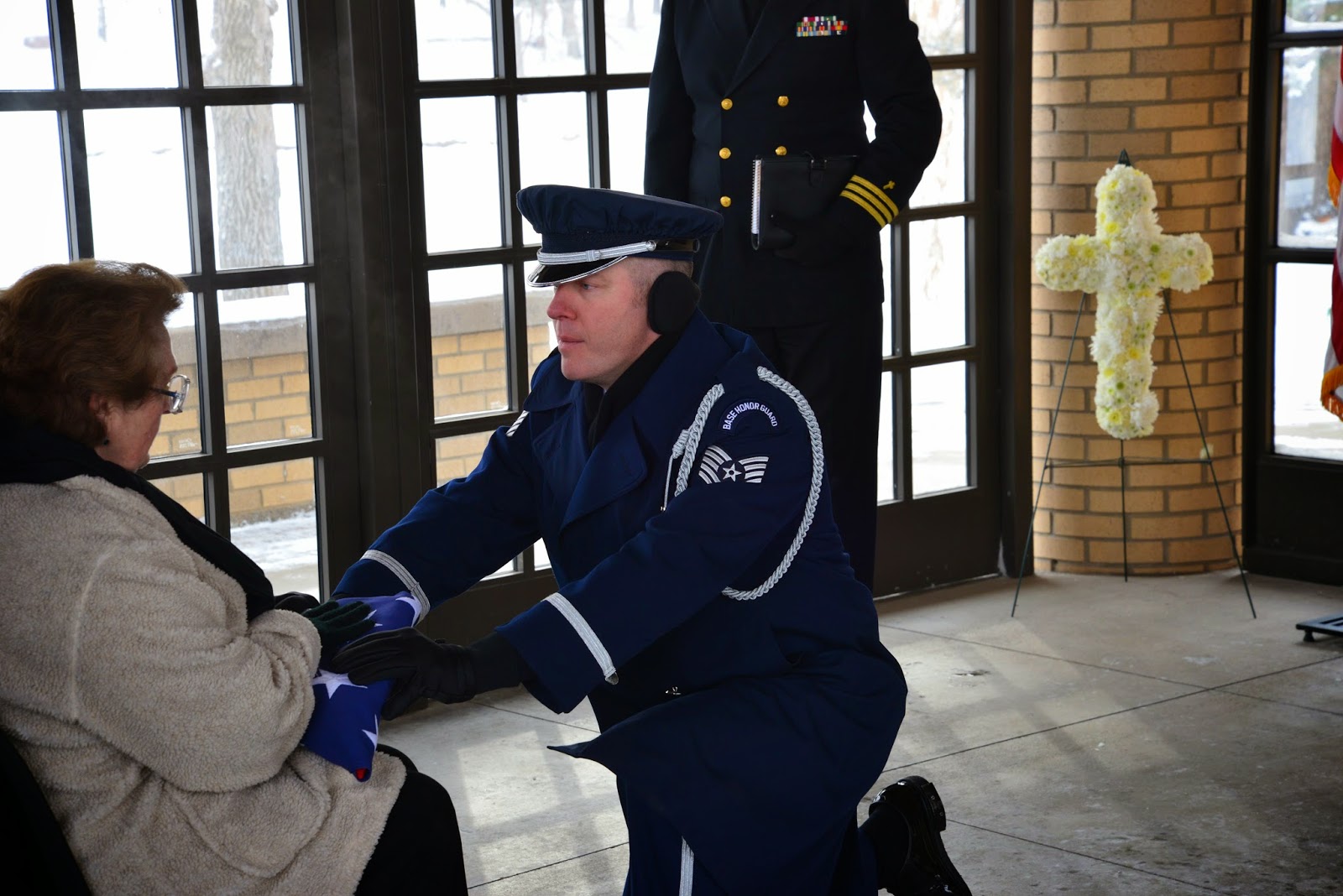 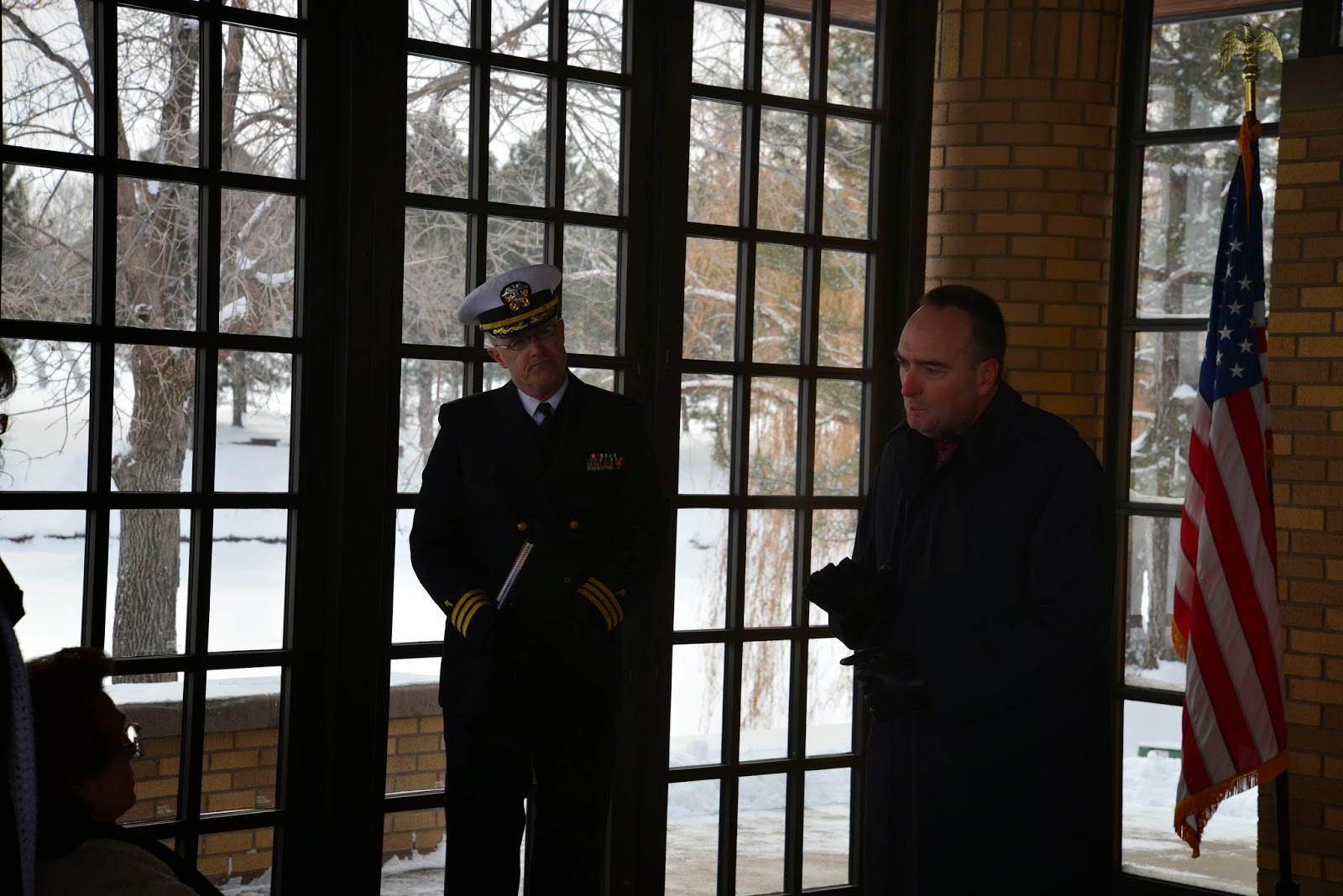 A Navy Chaplain from Buckley AFB conducted the majority of the graveside ceremony.  I was given the opportunity to share a few words and close with a word of prayer.  I definitely appreciated it.  "Well done, good and faithful servant."  You will be missed... Once the ceremony is complete, everyone is ushered out of the pavilion.  The staff at the cemetery take the casket to its actual burial site. 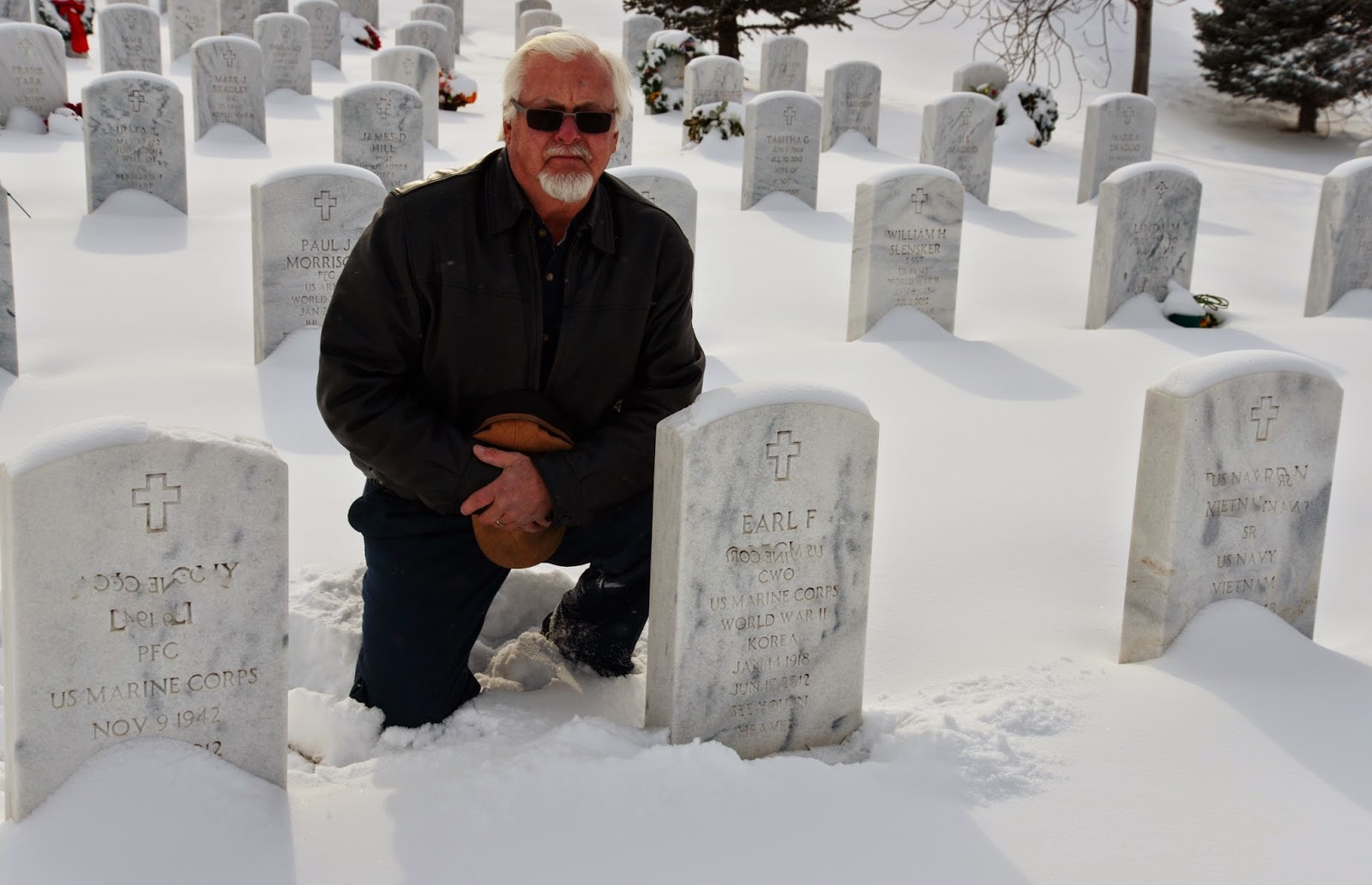 Earl and I spent a few minutes with our father, Earl F.  He is buried at the same cemetery as Mike - not too far away either.  The emotions of the moment are a bit overwhelming.  It was the first time I had been there since my father's funeral in 2012.  The sight of the grave stone brought a flood memories.  I really have missed being able to talk with him.


An added bonus to the trip was spending time with many family members I had not seen in quite a while.  I thoroughly enjoyed spending time with my brother, Earl, his wife, Mary and their son, Jerome.  I also got to see Crystal and Jennie, Earl and Mary's daughters, Dominic, Crystal's son, John, Jennie's husband and even my sister, Rebecca.  Come to think of it, I got to touch base with a huge number of family members.  There was Paula and four of her children, Joanna, Kathy, Debbie and Mike.  There was my sister, Kathy and her three children, Kim, Brian and Kurt. There was also Sierra, Kim's daughter and Robin, Mike's sister and her son, Randy.  It really was a who's who of family relationships. 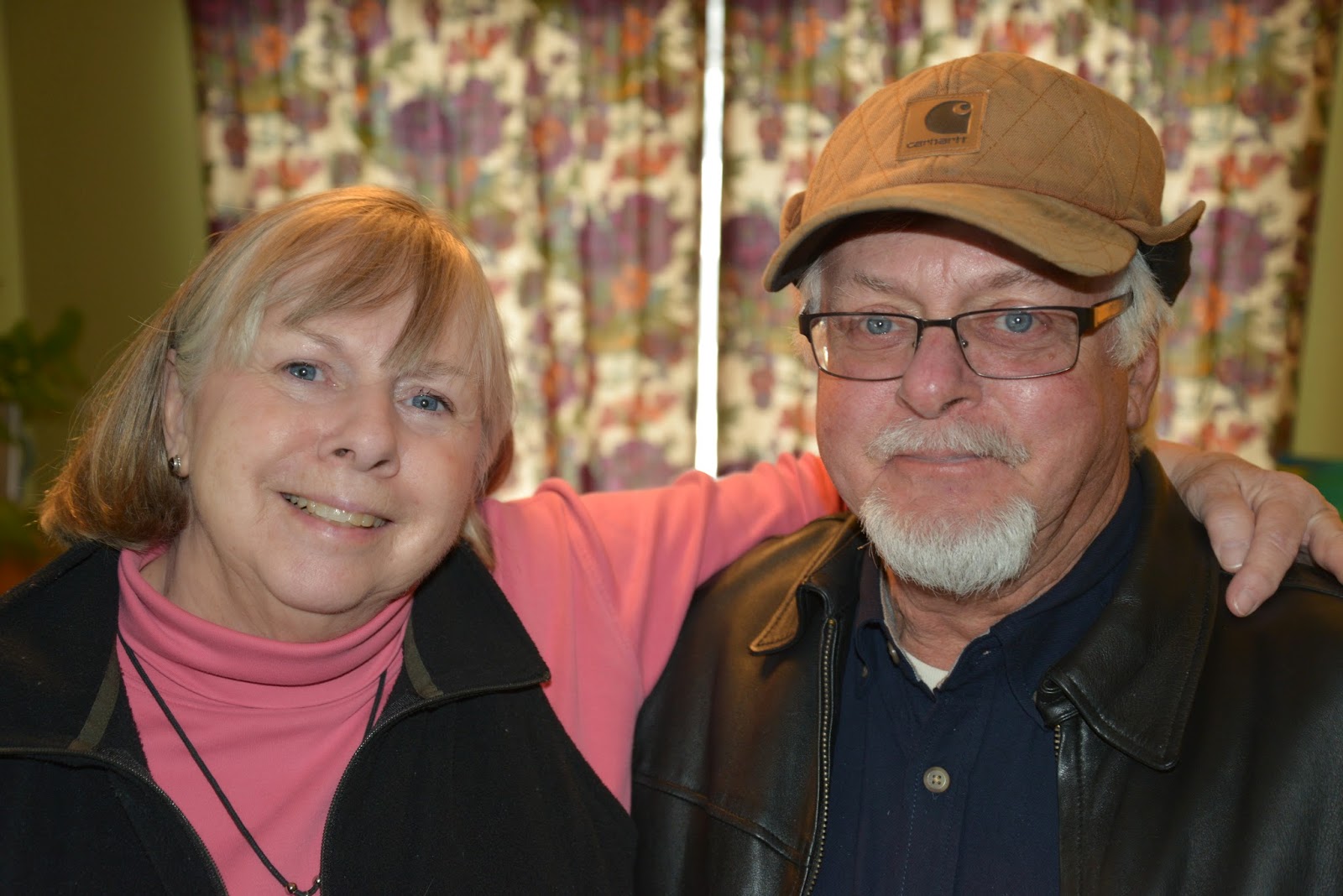 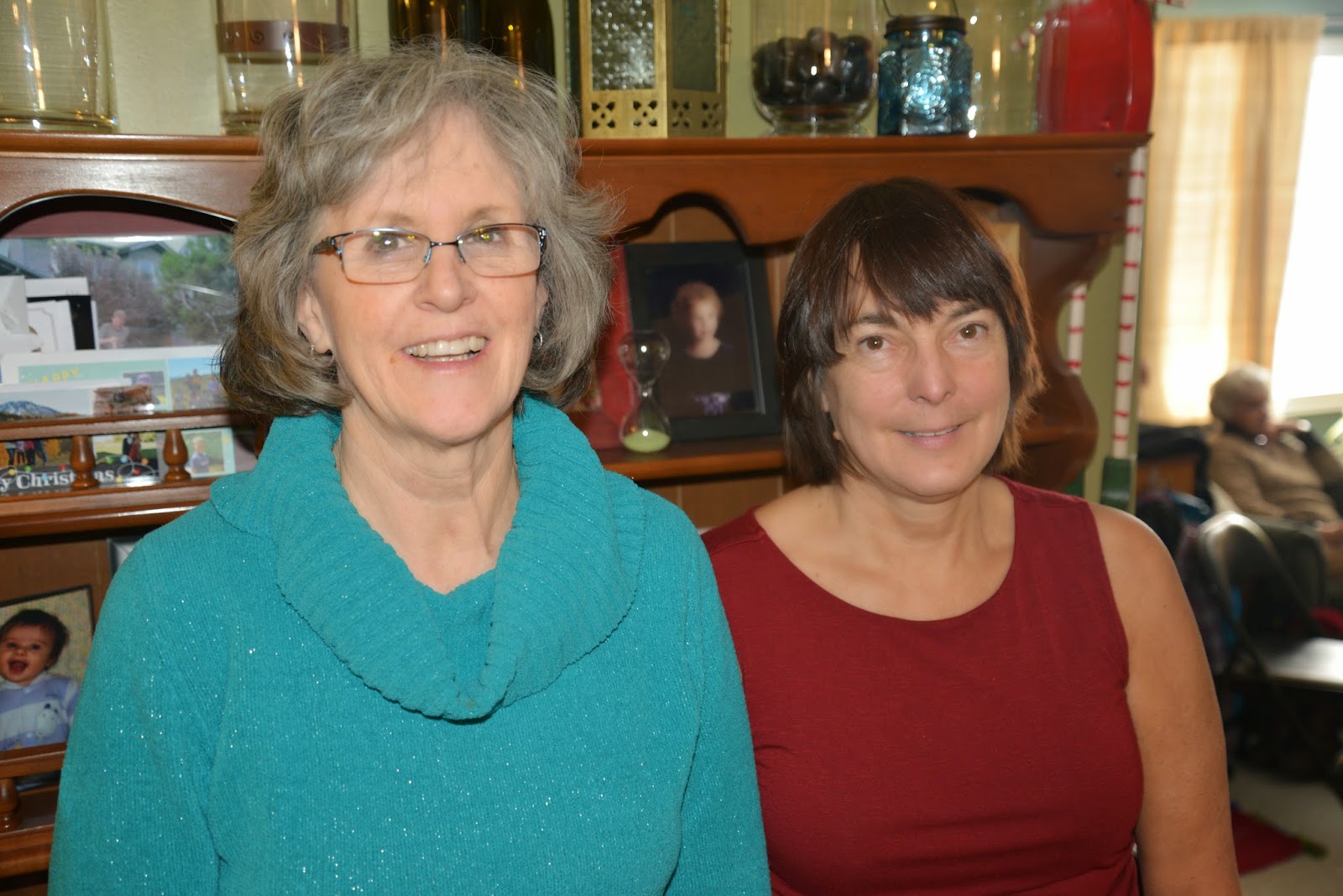 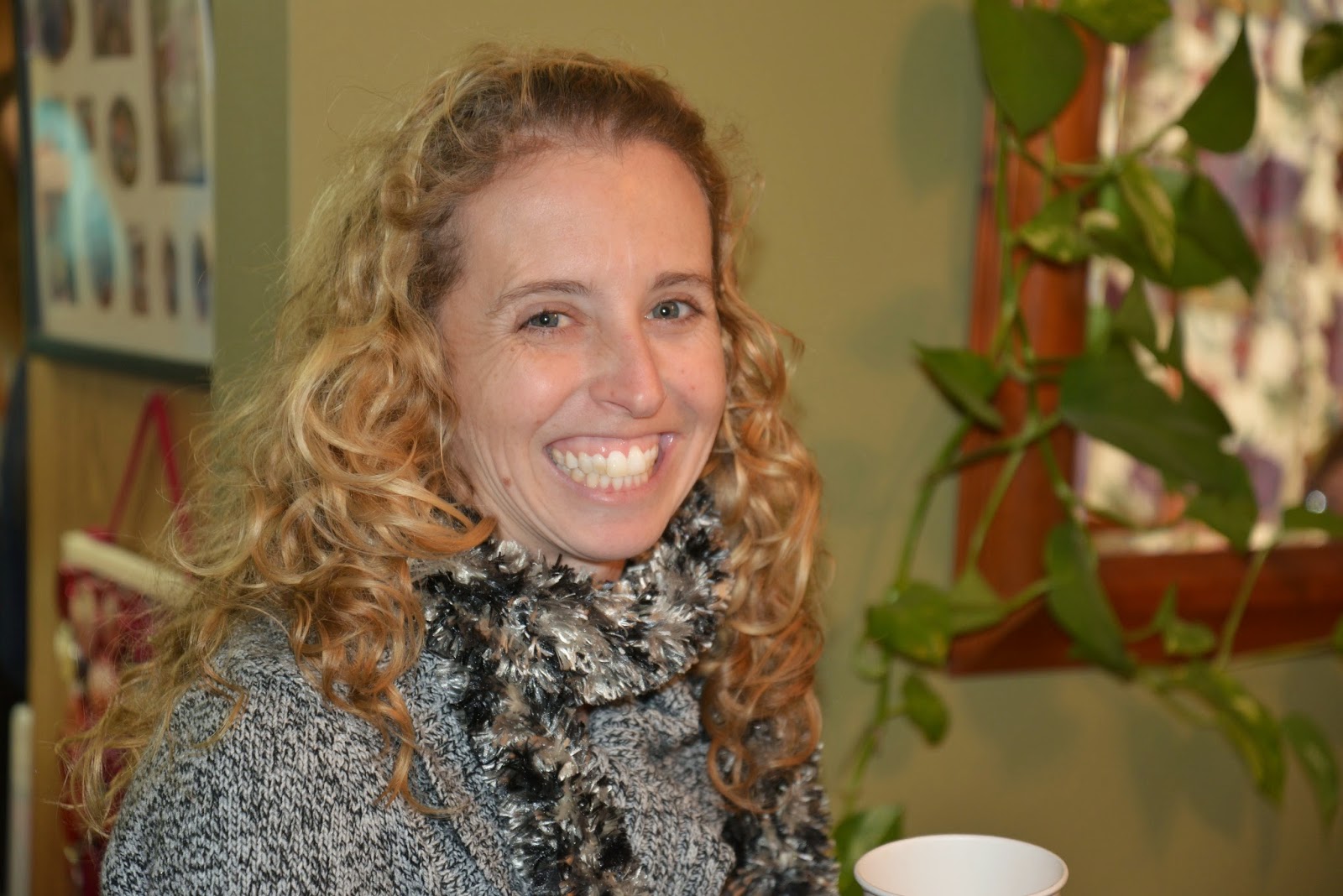 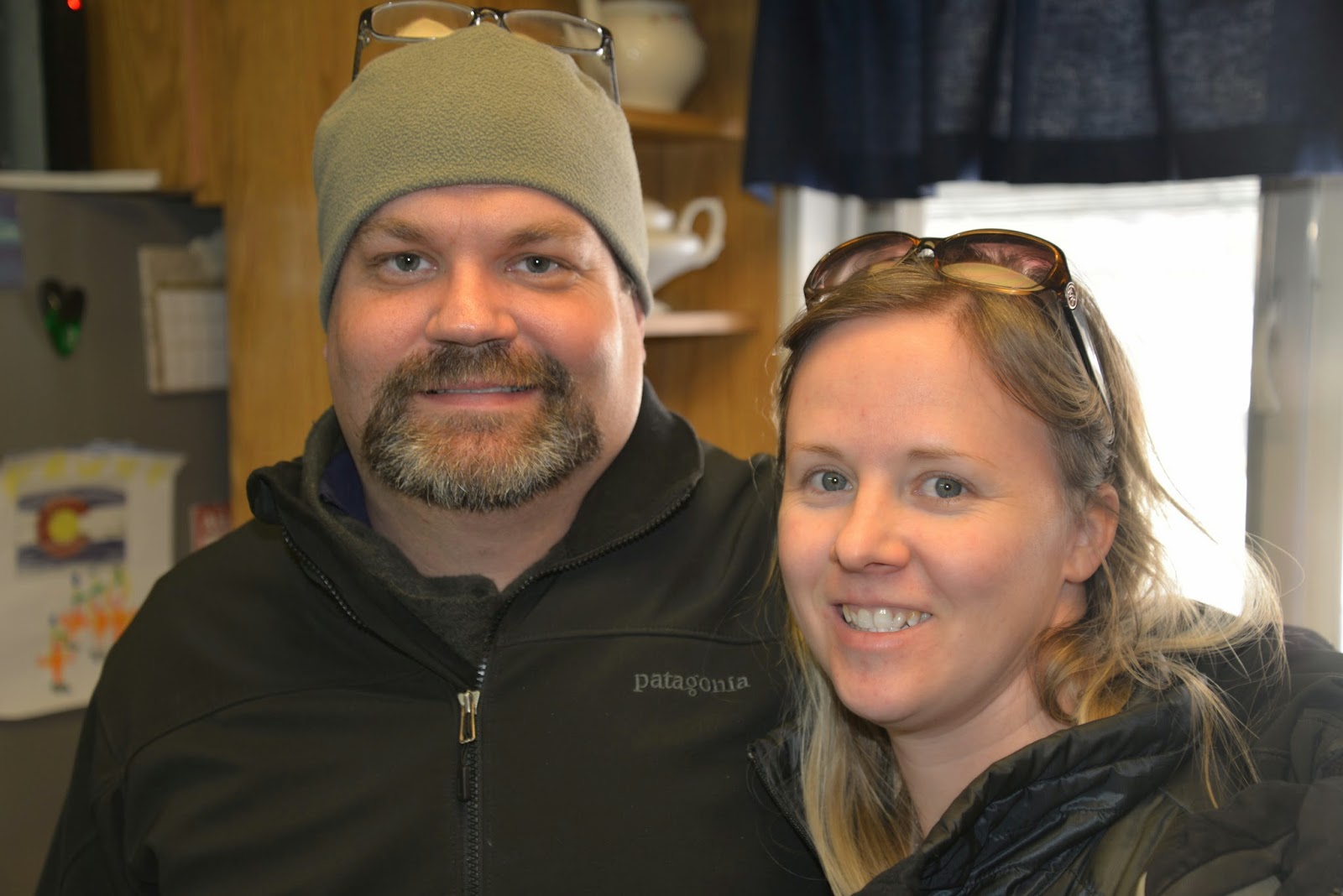 John and Jennie - Jennie is Earl and Mary's second daughter.  I looked through all of my pics and noted that I had missed Jerome as well as a few others.  I will be ready to catch those the next time around. 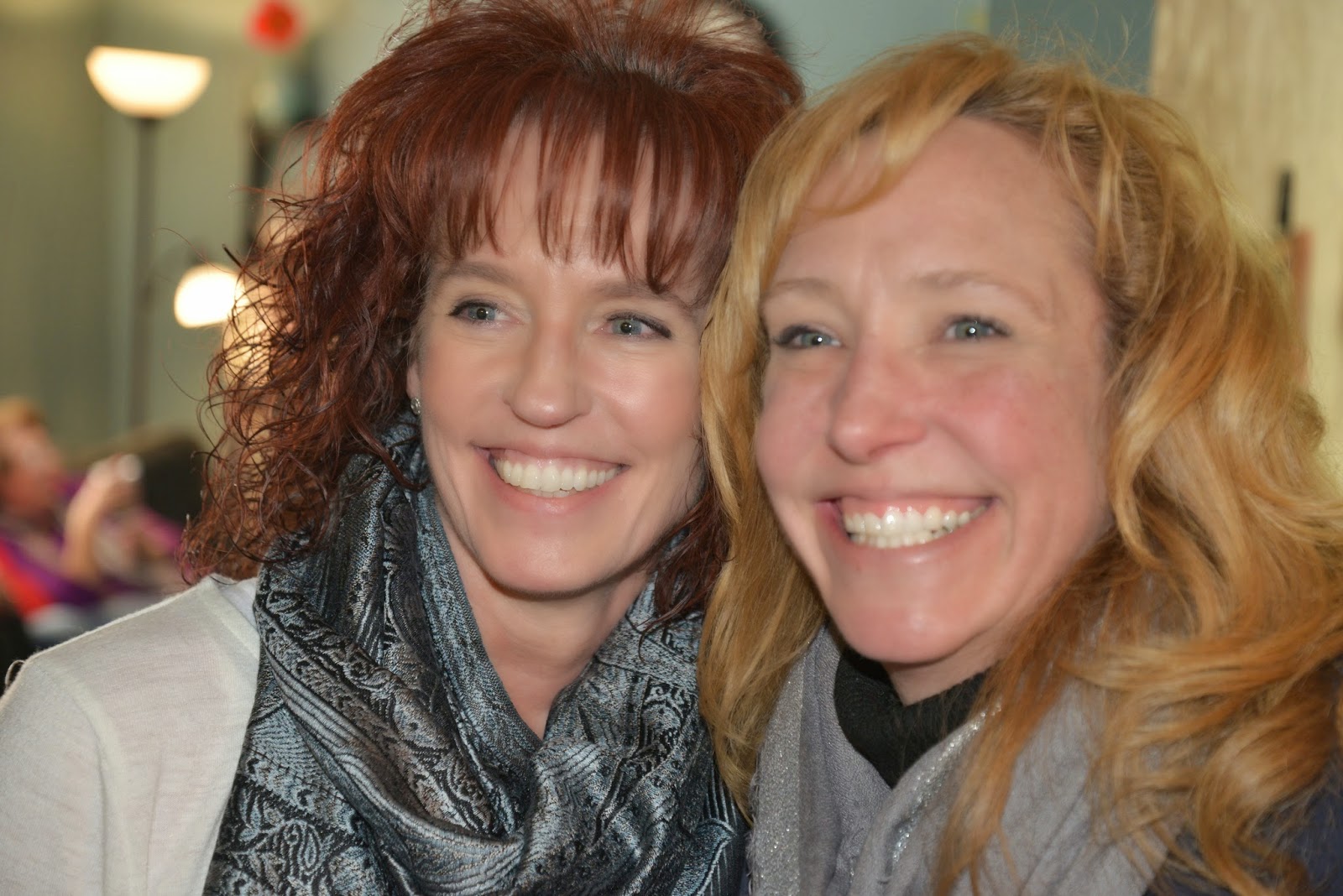 Two of Mike's daughter's, Joanna and Debbie.  Debbie came to support the family when my Father passed away 2 years ago.  I enjoyed touching base with her. 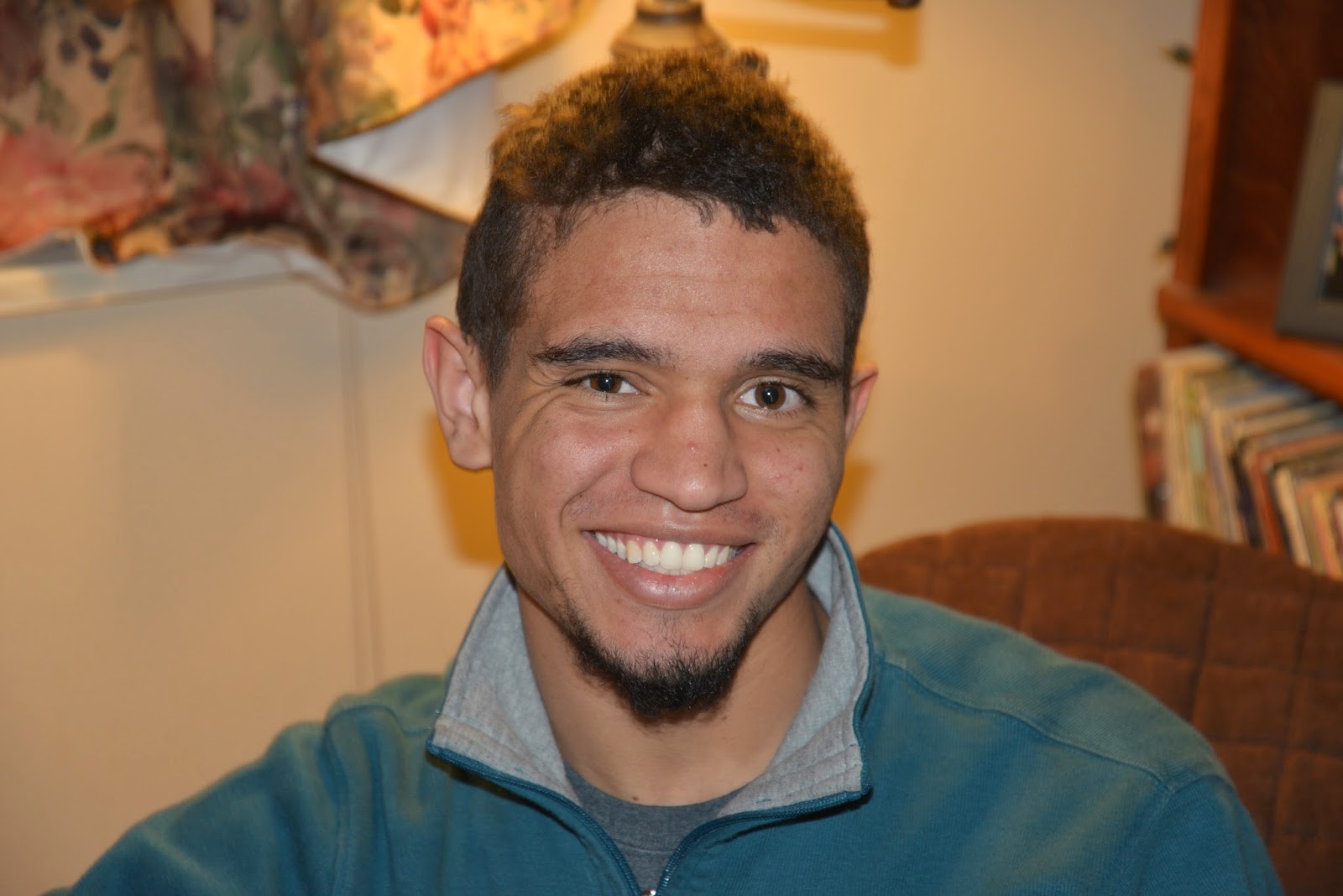 Crystal's son, Dominic, deserves a post of his own.  He is a walking miracle.  He fell off of a second floor balcony onto concrete.  He was hospitalized with some very severe injuries.  People from around the world began praying for him even as some very talented medical folks worked diligently to save his life.  It was good to see him up and around.  There is a long journey ahead, but hopefully, the worst is behind him...


Later that evening, we had a time of reminiscing.  I found myself wishing family had been closer in those growing up years.  There was so much life that I just missed.  Don't get me wrong; I enjoyed my growing up years, but there could have been so much more family in those years.  I am over half a century old and am trying to catch up on life and family.  How does this happen?

Prayers for you and your family. I'm glad you were able to attend the service (I remember how moving the service for my Father was) and am also praying for the medical issues ahead. Prayers following you!!

Thank you for your prayers, Cheri.

I had the opportunity of meeting Mike the younger at my dad's vigil. The first time I knew of Mike was at his father's funeral. Growing up we had heard about daddy Earl, but there was no mention of his kids. (sad)

My father's passing brought joy and sadness. It was obvious to me that God was with my dad during these last month's of his life. My dad's health brought many of us together. Relationships were introduced, strengthened, and also realizing what has been lost in these past years by not staying in touch or knowing each other.

The day of my dad's burial, I was there when the Navy chaplain asked Mike to speak and do the closing prayer. What a blessing he was to the family speaking to us and my dad.

Farewell to a Brother is beautifully written and will be cherished for years to come.

Since we have lost so much time in the previous years, I want to start this new year by remaining in touch with family members. God brought so many of us together through my father in these last months. I don't want us to lose what has been started.

If you are ever in Texas and are near us, our door is open. Our address: Bob and Joanna Sanchez, 29634 Post Oak Run, Magnolia, TX 77355. If you don't mind, could you send me your address?

Since returning to Texas, I have thanked God every day for the blessings that my dad has brought to our family. His passing is a start of something good, if only we are to grab hold and not let go.

Thank Mike for his farewell to my dad and the pictures he included. Again, I will cherish this writing for days/weeks/years to come.

God's grace be with you and your family - Joanna