We like to google things to do, places to see and hikes to complete, when in a new area. I tried to get a tour in at the Euphoria Chocolate Company in town, but they responded they don't do tours and "no one in town" does tours. Hmm.....I take blanket statements as challenges. We found a few tours and then.....

This very cool Factory Tour's Site was shared in one of my forums or boards.....It lists tours for each state in America.  We found several Class A Motorhome plant tours in this area. ALWAYS CALL AHEAD when you hear of a tour or such online.....we found three of the four tours were no longer giving tours....but the Marathon Plant DOES.
I didn't have a clue who made or what a Marathon RV was....I was in for a treat. As we pulled up, I realized these were sure to be more money than the previous models we'd looked at. I told the kids to put on their "rich persona" and they did very well.....so well...in fact....that I was asked at the end of the tour if we were planning on buying one as I had taken so many pictures and the others had asked such good questions. ::wink::

Marathon buys the Prevost chassis from Quebec. They are driven down to Oregon and arrive looking like this. Marathon then customizes them. Not as in "customizes to factory specs" - though they will - but customizes for each customer.  Can you imagine? Each coach is decorated, and configured to the customer's desires. Be still my heart. They do it ALL here in plant....make fiberglass end caps, paint, furniture....all of it. 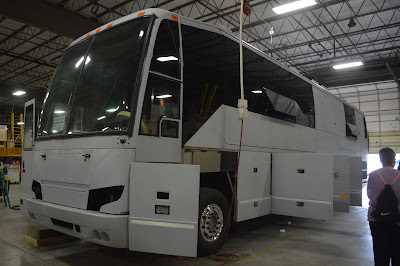 It was really fun to see the bare bones of building a coach....and the types of materials they use, the differences between a Marathon Conversion (bus) and a typical Class A Motorhome.


Checking out the driver's seats 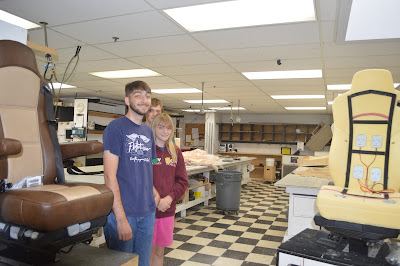 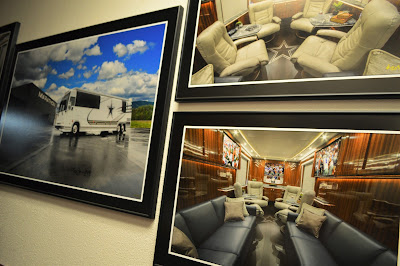 As a side note, it was fun to hear stories of the various folks who fly in to town, meet with the design department and engineers and then fly out....all into this little town.  They remove the slides for easier access as they outfit the inside. 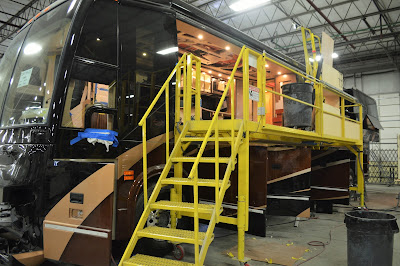 Storage bays galore....I could have a library bay. A funny story involved the Andrettis. Evidently, they ordered a bus with a trap door from above and put beds in a bay for a child or two. 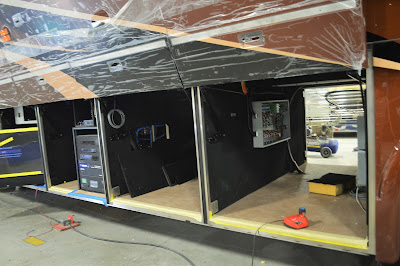 We went inside two coaches....and were told they sell for 2.4 MILLION dollars.....At about this point a dream was birthed.....what if we just bought the chassis from Quebec and outfitted it ourselves - the ultimate DIY project.....how much would that cost? $700,000.00. Um still significantly more money than we plan to spend on a Motorhome. 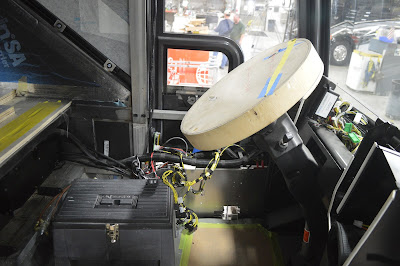 I see a kids bunk ROOM, and an office spot...seating for all five us in the living area....of course at 45 feet it would be hard to fit into most state parks. 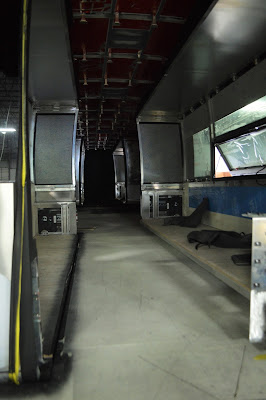 There were 11 of us in this coach and it WASN'T CROWDED. 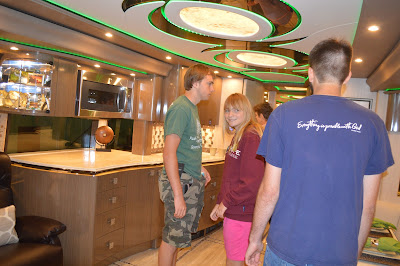 See that ipad on the wall? All the systems are controlled by it - lights, shades, water, temp.... 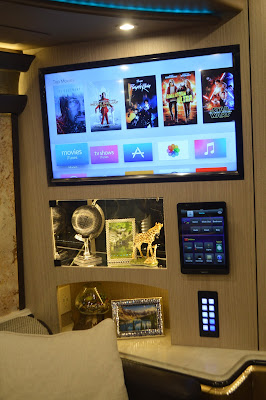 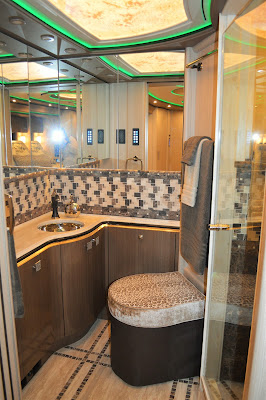 We're on a mission to find something I can drive - yes, I think I could do this easier than the trailer. 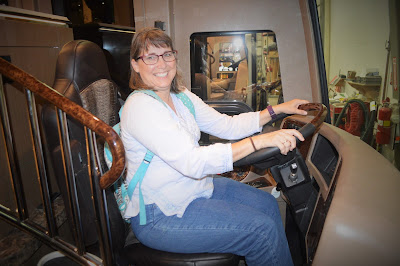 All the plumbing - one of those buttons is amazing. You push it and the stinky slinky shoots out, push it again and it retracts. The man said "No one has to mess with the slinky." I let him know I don't have to mess with it in our cheapo trailer either. The difference between our aluminum frame and this stainless steel frame was phenomenal. 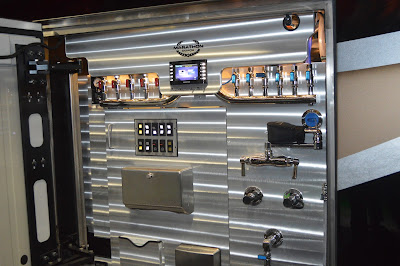 This was a fun way to spend a morning. I would like to visit some a motorhome factory too - but the Fleetwood, Monaco and Winnebago weren't giving tours.

I'd love to see a Winnebago rour too. My grandma had one when I was little and that's what we used to stay in the Redwoods until we found the Redcrest Inn. Such fond memories!

We tried to tour the Winnebago Country Coach plant, but they quit giving tours. LOL We'll try to catch them at another location.