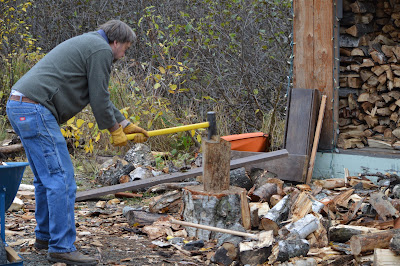 This is Michael tackling two more cords of wood - after our "split and seasoned" wood was delivered. What folks don't know, is some days Michael resembles, and feels, like the tin man. His muscles are stiff and won't move as he'd like them to move. Today was a stiff day. He also did not feel well - at the time (I'm writing on the 16th) we weren't sure if he was catching my bug, or if it was related to meds. We suspect strongly it was meds at this point. But he wasn't feeling well. The boys have spent every afternoon splitting wood to get us to where we were when we ordered two cords of SPLIT wood. The plan was for them to spend this afternoon helping stack the wood....because a "wintery mix" is predicted.  The boys had to do school.....but the wood needed to be splitted.  I strongly suggested Michael spend the money and rent a gas splitter. After some thought, he did just that, and set up in the morning. 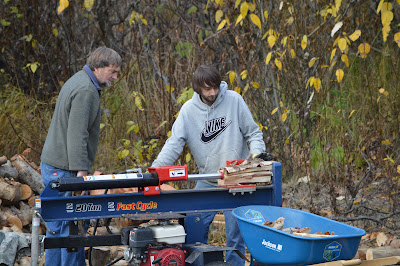 He and the boys were able to split 2 cords of wood, and stack it all,  in one afternoon! We beat the "wintery mix." 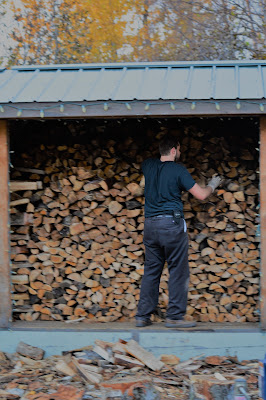 The last piece is split! 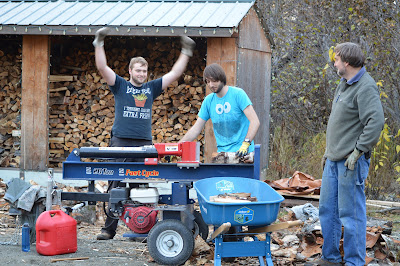 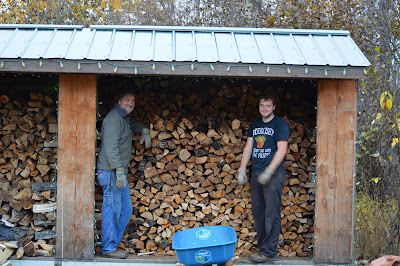 A full woodshed. This is the result of much work by Cory, Michael and the boys, Izaak, Josiah, Jamin and Jared! I think, if you visited our  home in the past couple of months, you were likely to help cut a tree, split some wood or move it from the back to the driveway. LOL  We had thought 1/2 of the woodshed would be seasoned and 1/2 from the  dead trees on our property. Seasoned wood, we are told, must dry at least 6 months. By the time we burn the new stuff, the stuff we cut should be seasoned - or such was our plan. Much of the stuff we cut  is going on 2 months now. 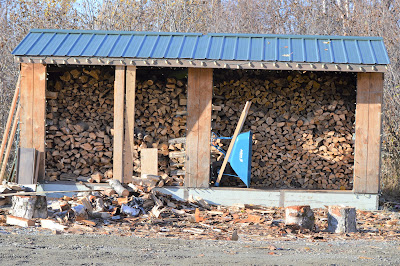 As we burn it we seem to be finding the 1/2 which isn't seasoned - hopefully the seasoned half will show up quickly. ::snort:: Maybe none of it was seasoned. We'll look for another man to buy from next year....OR....

We may get a permit, cut our own wood, and rent the splitter next year!  These guys may even be able to make some money selling it.

This would be a good time to publicly say that we would not wish for Michael's physical challenges, but we are so amazed and humbled at how the kids have stepped in to help. All of the kids, but the younger three especially.