Y'all - we actually grew something besides lettuce and basil that we ATE. Radishes....I was thinning them out and lo and behold, there were tiny little radishes.  We also had spinach from the garden tonight..

I pulled a weed and  realized it looked like parsley - I tasted it. Cilantro. Shoot....I only see two other little leaves that survived the moose....but maybe there are more under there. They must have gotten buried pretty deep.


This teeny-tiny Texas Rattler melon actually has caused the most excitement around here. God-speed little one.... 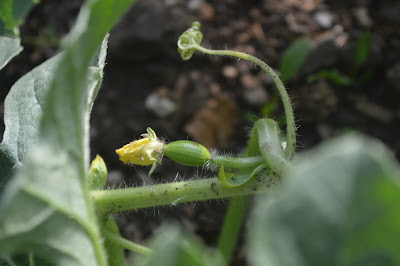 We've carried the seeds around for years and we need ONE melon to mature so we can get more seeds. None of them survived last year....but this year....they have one side of the greenhouse designated for watermelon. I had planned to pull the weak plants out when I saw which was growing well. I've only had the heart to pull one of the plants. ARGH. 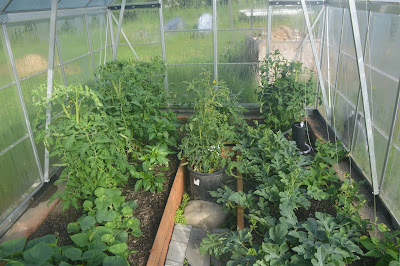 Garden layout -Corn in the forefront, potatoes in the brown space between the corn and carpet. YES - I DO have the old carpet from BreZaak's house in my garden. ANYTHING to cover weeds. Zuchinni to the left of the carpet. The beds have carrots, lettuce, cabbage, kale, beets, spinach, radishes and evidently a bit of cilantro. There is a row of cauliflower and broccoli to the right of the 2nd bed. 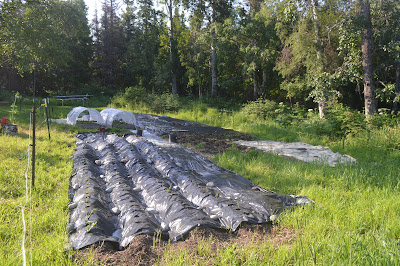 By the time I realized I had way more space than seedlings - I couldn't find more things to plant. I'd love to find squash, pumpkins, more potatoes..... 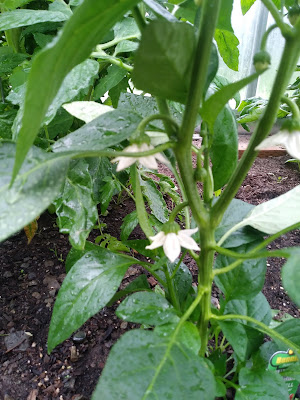 Tomatoes in our future? 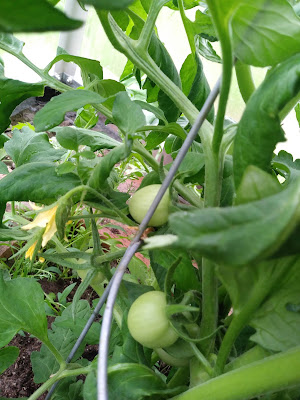 Something ate the beet leaf....back to google I will go. 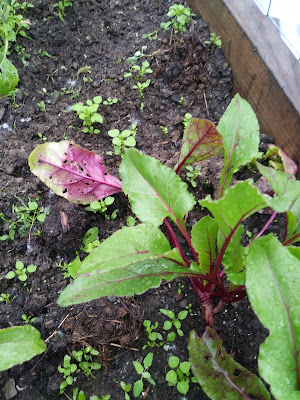 I keep repeating Michael's comment, "It's a work in progress, De'Etta."  This is better than last year. Next year will be better than this year....I'll get it figured out.