Sandy gave me this recipe last winter when I was searching for ways to cook salmon. Salmon is not something we ate much of before moving to Alaska.  I hadn't tried it as, well, fish soup didn't SOUND very appealing. Honestly, we have one who still dislikes salmon, one who loves it and I think the rest of us fall into the middle space somewhere.

I planned to make Baked Blackened Salmon tonight (thanks, Tracy) - but when the downpour hit I remembered this recipe. I didn't use any of our canned salmon as I already had fillets thawed. I threw them in the oven with some spices and used 2 lbs of them for the chowder. I am excited to report EVERYONE liked this. Even our fish hater had a second helping. It doesn't taste fishy! I'm happy to have another way to use our canned salmon.  LOL 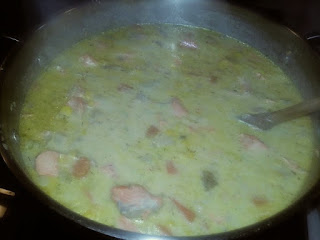 Bring to a boil, reduce heat, cover and simmer 20 minutes.

Cook until heated through.

Recipe Notes:
I did not have creamed corn. I used frozen corn and added it when I began simmering the soup.

After simmering - I added a 1/2 a block of cream cheese. This was because I thought it would be creamy and I was thinking of creamed corn. ALSO - I can't eat cheddar cheese and still wanted the cheesy taste. I added this and melted it....then pulled out some for me.  I added  cheddar to the rest of the soup.

I only had one can of evaporated milk and was doubling the recipe. I used dry milk and it was fine.

I did not double the weight of fish and put in two lbs of crumbled fillets - that was plenty salmon - but I'm not sure how it compares to 16 oz cans of salmon.