These are all questions we've been hearing. No doubt, life WILL be less complicated when we have a ramp.  So here's the scoop.

At first we were told we couldn't bring Dad home without a ramp. Michael talked a contractor friend - a man of God who loves us and whom we love  - he and his wife. They talked the 2nd weekend in September. Dad had just moved to the facility and we were told he would be there at least 2 months. Aaron gave us an estimate. We gave the green light. There was no big rush.

Dad began falling in the center. We told them we'd be bringing him home as soon as we got the ramp done.  After the 2nd ride to the ER (and the 7th fall) we had those conversations where we insisted Dad be "discharged a month early," regardless of the ramp.

In other words -WE sped up the time table of the need for the ramp. We also proved we could bring Dad home without a ramp - we just couldn't leave home again. LOL We brought Dad down the back of the house to the basement door, and took the stair lift up to the 2nd floor. That only worked because there was no snow or ice on the decline to the basement door. It snowed the WEEK we got dad home. If we'd waited, he wouldn't be home until the ramp was finished.

Aaron came over and worked on parts of the project as weather permitted... we ran into things like the ground being frozen solid, clay that had to be dug out before concrete could be poured, which ended up requiring a truck to bring much more concrete.....

As Dad feels better he wants to GET OUT OF THE HOUSE! I understand. It WILL be easier to juggle schedules if Dad can come WITH me to run errands. We will both be happy to be back at church. It will give us peace of mind to know if we need to take Dad to the doctor we don't have to call the medivac. I'm desperate enough for social interaction I may take him out to lunch with me and the girls. LOL

Yesterday the answer was, "Yes."  He was here in the bitter cold, working on the ramp. There was more ground that needed to be thawed...but the platform is done....the concrete pad looks nice and is done. He couldn't smooth out the ground because it was frozen solid.... 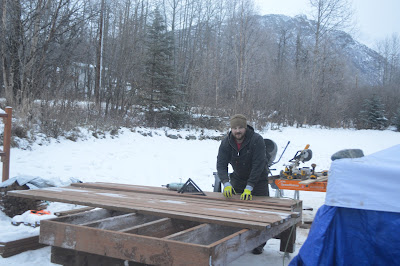 He set up a warming tent again around the frozen ground and warmed it up....after church he was back here smoothing out the ground before it had time to freeze again tonight. 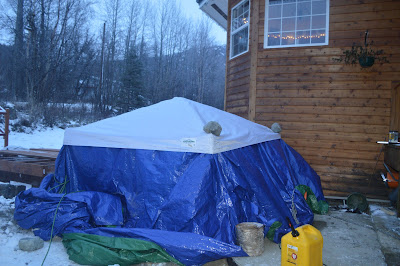 He'll be back tomorrow to work on the ramp. I'm not sure if it will all be done tomorrow, but he says I'll be able to get Dad down the ramp by Monday night. Dad has a doctor's appointment on Tuesday. ::snort::

I attempted to wheel Dad out of the house to the landing so he could watch yesterday. I had a "spot of trouble." OK - so it alarmed Michael and Aaron...and they are thinking of another element to make it easier to get Dad over the threshold...I guess it may have looked like I was going to lose control of Dad and send him down the steps. I quickly learned to back over even small bumps...but the space is tight and I thought we could manage a small bump in the road.