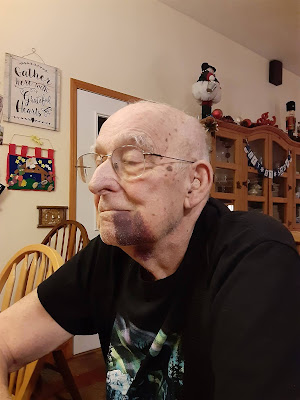 Look at that bruise! My word! I was glad dad had to wear a mask that covers his nose and mouth today when we were out.  The audiologist was a bit alarmed today when he took his mask off.

BTW - we encountered the WORST handicap parking spot yet...there was barely enough room for the chair to fit between us and the SUV next to us...and my car covered half the ramp....LOL

Dad got new hearing aids in July, and never made it back for the follow up appointment. Along the way he decided he didn't like wearing the hearing aids. We went in today to see if they were working. They were...but she she gave me a kit for cleaning them - which we hadn't gotten originally. She also stressed how important hearing is for positive brain activity. Having her say it confirmed what I've been saying and Dad has agreed to try the hearing aids again.

I have an app on my phone which controls the volume of his hearing aides. He asked me repeatedly to turn his left ear down. She shared he has to wear them, let his brain hear all the noises, and his brain will then learn which ones to filter out....but if he doesn't wear them - that will never happen.

It is nice when he wears them....otherwise we have to scream at the top of our voice to be heard...and that is hard for all.