We have three young adults who are currently working towards that grand life-skill of possessing their OWN driver's license.  Alex continued to drive through the winter. Stacia and Allie finished up their respective driver's ed during the winter, we added all to our insurance, and told the girls we'd start behind the wheel lessons when the ice was off the ground.

Alex has his driving test with the DMV tomorrow.  We set out...Stacia is making cakes at home, GG came with us,  we were hoping Allie would be able to meet up with her mom for lunch while we drove. That didn't work out so she joined us for the lessons. I told Alex I KNEW we were a bit unnerving, but having a stranger in the car tomorrow may be unnerving too.  Alex has been driving quite a bit and we are confident with his skills. In looking over the list parallel parking is the one skill we thought he needed practice on. We went out and did a few roundabouts, freeway speeds, and then came back to the church's parking lot to work on parallel parking.

I laid out a soda can and a frisbee and told him to park between them. ::snort:: Pastor heard us and came out. He brought out cones and told us to feel free to practice. Which we did. 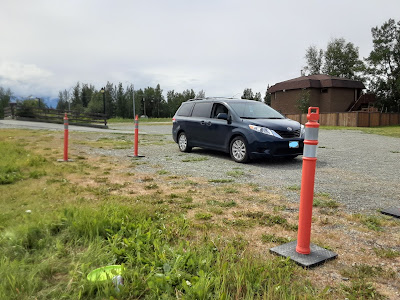 Alex practiced for about an hour while I gave such helpful pointers as, "Put your tail on the line..." and GG shared what it is like to park a double trailer semi.

He felt confident. He was nailing it. We drove home....and after lunch I was back in the church parking lot with Allie and Stacia. Both had had previous practice time with their father's. They told me what they'd done before, and both said it had been quite a long time since they did anything behind the wheel. I decided to set the cones up in somewhat of a course and have them go through it...focusing on turning, the space the car takes, how this car responds(as neither had done much in my van), we went back and forth with me calling for them to stop quickly at random times....turn etc. A few cones were injured - but none fatally. 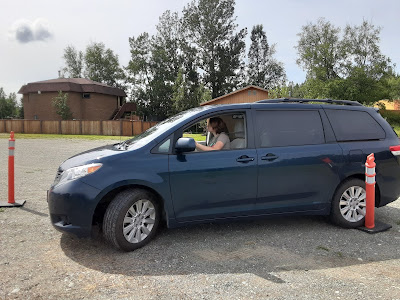 I had them turn and do the loop both ways to practice turning in both directions.

They were both nervous about driving up the ramp to the church, of course, I had them do that...and they got comfortable with the width of the car and how it really doesn't change when you have a confined space. LOL

And just when they were feeling pretty good about their driving, we went off the church grounds and into a residential area. I knew both were ready and were quite good at spotting potential hazards. They've called out the hazards while I've been driving for months - I knew they knew what to watch for. Both did great. They went the right speeds, stayed on their side of the road, passed parked cards when needed, watched out for kids, and neither of them ran a single stop sign. 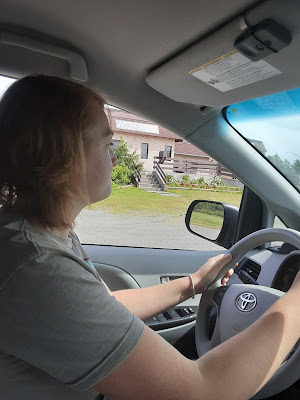 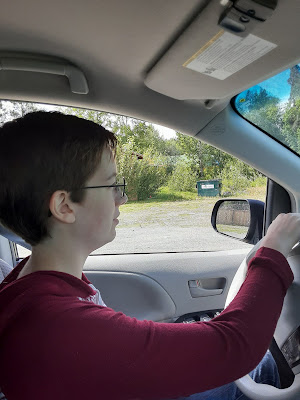 As we closed our time we talked about what they felt confident doing and what they thought may be areas we should continue to work on - both were self-aware and knew just what they personally needed to work on. Both were a bit shy about pulling the nose of the car all the way into the parking spot so I shared I wanted them to do it just so they knew how long the nose was....even though it's not a big deal not to pull all the way in. It IS a big deal to KNOW how long the nose is....and so....yeah....we ended on this fun note....no worries...totally staged. The car is in park, the engine is off. LOL 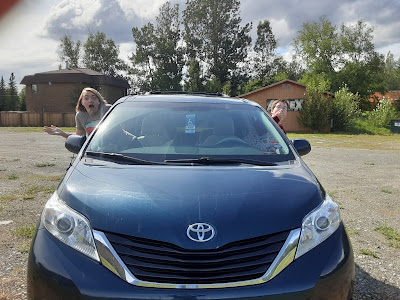 I assured them I will not take them into traffic until I feel they are ready for it, and they aren't at this point. I told them I was quite  confident there would be a day when I tell them they are ready to drive on  busier streets....and they may well feel unprepared but they can be confident I'm not going to ask them to do so until I am 100% sure they CAN do it....like today when I asked them to drive off the church grounds.
Both got an hour of driving time in today...and I have spent enough time in the van today. LOL  Our goal is licenses before winter....VERY doable.
A fun observation, I may be the only car in the valley sporting both a handicap plaque and a student driver sign.