It's a four moose kind of day! Two of them weren't even memorable enough to take photos of. LOL  I've been seeing lots of tracks in the yard, but we haven't been seeing them until the last few days.  When Cy and Michael were shoveling the path out to my compost bed they mentioned the tracks went right up to the bed. They said it appears I've been serving a buffet to the moose population. They may have a point. This little one was cute. 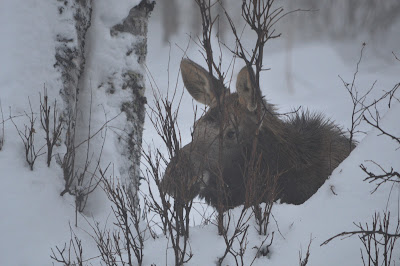 Snow! I opened the door (this is 9 a.m. BTW) to go to the chickens and rabbit and was met with a wall of snow.  It didn't snow overnight. It warmed up yesterday, it rained yesterday afternoon and evening and the snow had begun sliding off our roof. It makes an amazing noise when it does this. I had to dig out a path to the chicken yard and then shovel out the door as the snow had piled against the coop. We've learned to park my car away from the house, so it doesn't get buried.... 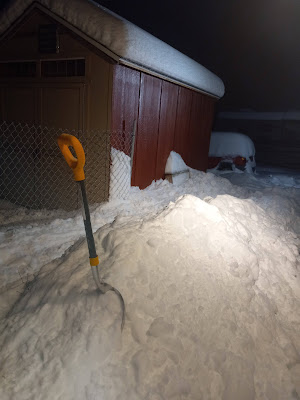 At the back of the house there isn't much we can do to avoid the mess. This was a clear path on the 25th. Today it's a pile of snow. LOL 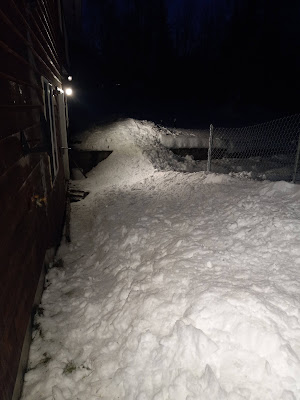 Remember that clearly defined path to my garden/compost bed? It's still there, after the hill of snow is navigated. LOL  It was 31* this morning...things are going to melt and be a mess. I much prefer snow to ice. 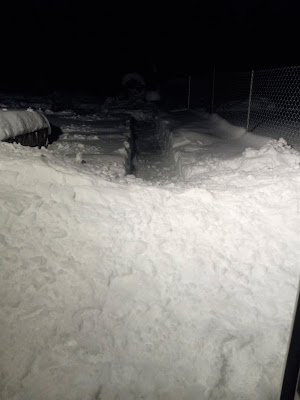 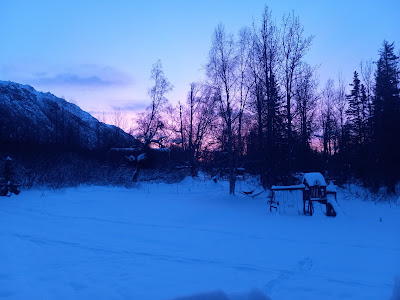 An Allie update - For the first night she and I slept through the night. I woke her at 7 to get some Tylenol in her as it had been 9 hours. She was happy to take the Tylenol and get ice for an hour before she got up and showered. She kept her Tylenol OR Ibuprofen down to every SIX hours...this from alternating meds every three hours. She was up more today, but still spends quite a bit of time sitting with an ice pack. Her throat feels better.  Her appetite is returning. She's getting bored. She insisted on making lunch today. Slow and steady. She's doing great. 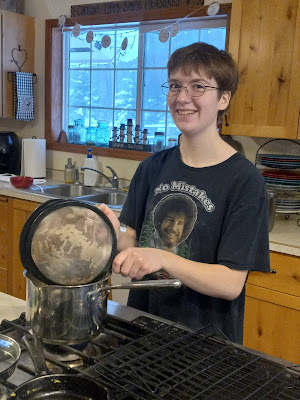 I got a late work out today...and as I trudged away on the elliptical this gal jumped right over the retaining wall and headed down the nicely shoveled path to the compost bed. Yep, she enjoyed a leisurely lunch before moving on. 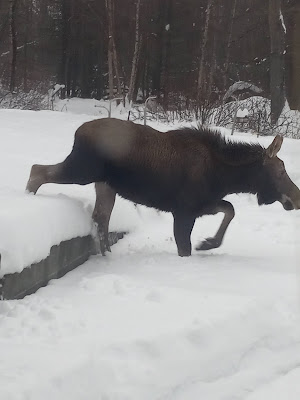 Michael and I filled the day with shoveling. He also worked on a puzzle and we both helped Grandpa. I wrote several September blogs and linked a couple which may still be of interest on Facebook. My goal is to be current with 2021 on January 1st.  The girls spent hours on the couches writing. They are both working on novels. Grandpa took a long nap. He's paying a price for his Christmas sugar indulgence.
Jared called.
Nolan, the girls and I watched "Arsenic and Old Lace."
Another lazy day drawing to an end.