Ah, the party pig hat! It can only mean one thing. Another birthday! It's hard to believe Alex turned 20 years old today. 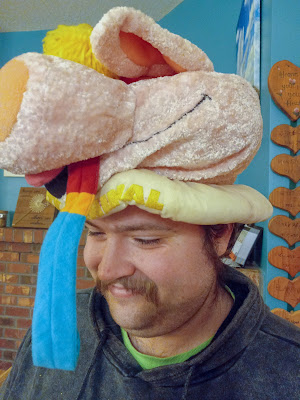 Alex has been busy working at McDonald's and connecting with gamers. He has recently cut back his hours at McDonald's to focus on studying for an employment test and application process for the next job he would like to hold.  I'll share more when the time is right.  This year he's paid cash for a truck, faithfully paid his rent and saved lots of money.  He's got goals and he's steadily working towards them. 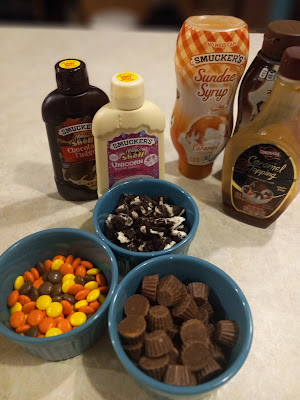 Yes, we sound pathetic when it's just the four of us to sing Happy Birthday.... 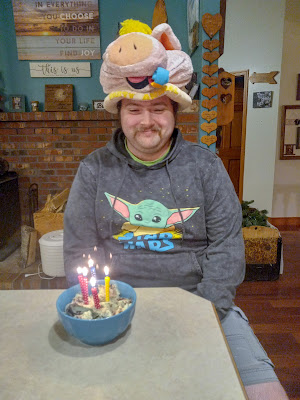 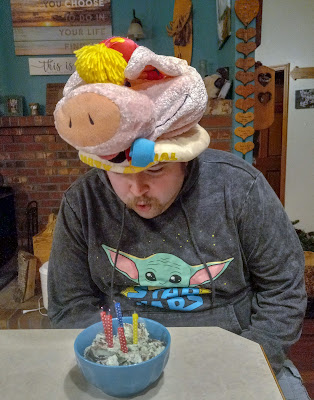 Alex asked for Orange Chicken for his birthday dinner. He thought an ice cream bowl sounded great for his birthday dessert. A word about ice cream...this family LOVES their ice cream. In fact, Alaska is the number one state in ice cream consumption. It's like we were supposed to live here. For YEARS we've had ice cream instead of dinner every Sunday night - just once a week.   Our family continued to grow (12 of us) and ice cream cartons continued to shrink.  We hit on the idea of having our ice cream in a mug, most often with splashes of milk - which creates the blizzard/shake effect.  One year we made ice cream cakes for birthday and the rest is history.....
This year we were on schedule to celebrate Nolan's birthday on the 8th when we discovered he would be working. We needed a cake that NIGHT and it takes a day or two in the freezer for the cakes to set. What to do? Arielle was here and suggested "ice cream bowls." What a great idea - like rice bowls but ice cream.....that's thinking outside of the box. And then I realized ice cream bowls are...um...bowls of ice cream and the way the majority of Americans consume their ice cream. ::snort:: BUT our family thinks they're a wonderful new dessert option.
We rounded Alex' night out by watching Tim Hawkins. We'd not watched any Tim Hawkins in about a year. Alex chose, "That's the Worst." We laughed until we cried. It was fun to discover Grandpa enjoys Tim Hawkins. If only he'd put out more DVD's.