Today is Allibration! As we discussed Allie's desires for a "graduation ceremony" she suggested a family trail ride. We talked a bit more and I suggested a BBQ where folks could share a Scripture, quote or song lyrics with her and we would pray a blessing over her together. She liked that idea, too. The logistics of doing it all in one day simply didn't work. Victory couldn't handle family and friends on a trail ride, and we didn't think we'd be back in time to host friends the same day. We planned for 24 and had 35....it was a fantastic gathering.

So...today is Allibration  - the day we celebrate all things Allie. Although, in truth, we are celebrating God's faithfulness to Allie. We are giving special acknowledgement to the educational milestone she has worked hard to reach.

We planned to have an outside BBQ and it began raining on Friday and into Today. Michael and Dad went to men's breakfast and the girls and I got busy cleaning the house so we could move everyone inside.  About an hour before people were to arrive we decided it was turning into a gorgeous day afterall and we'd pull out the picnic tables and yard toys from storage. People could be in or out.

Stacia made this darling graduation cake.

The notebook is for everyone to share their bits of wisdom and blessing. That basket was full by the end of the party. 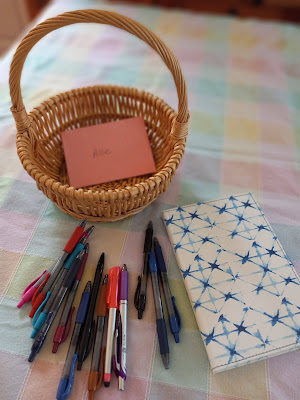 Setting up the trampoline. I am so thankful Michael thought to do this. The kids loved it.
Michael was ensconced on the deck with the grill.

Allie surprised us by preparing a speech. It was very nice, but I'm not going to include the text here. She gave honor to those who walked alongside her and God. 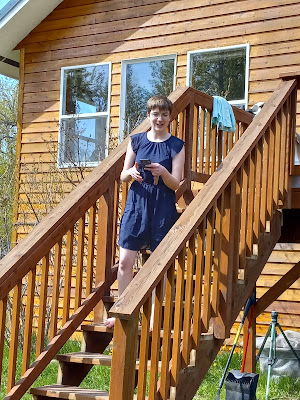 We had Allie share as soon as eveyrone arrived so she wasn't nervous about it as the day went on. Others played and visited until the meat was ready.

I LOVE THIS PICTURE!

The youth began a game of Bocce. When they had exhausted it's thrills, some of the men jumped in. Ed carries a measuring tape with him. Allie says, "He's just like Padre."  Shannon won three games and MI hael won the game Shannon didn't play.


As the afternoon wrapped up we placed a chair in the middle of the yard, and called everyone to gather. This was a challenging moment for Allie, but she was forewarned and did great with all the people crowding around...seriously in her space bubble. I laughed when I heard a Gherkin say, "You'll get used to it Allie. It's a thing."  Most were sensitive and did the hover hand....🙂. Everyone prayed for Allie and it was a great moment.
The photo on the banner is from the evening we celebrated Allie's acceptance into UNCO.

As the banner says, "We are so stinking proud of Allie!"  Today was the perfect compliment to The trail ride.