Tuesday mornings mean.....picking up a "surprise" for Arielle and dropping by to play with the boys while she goes to work at her church.  Benny had EXCITING NEWS today....he has a new bicycle helmet and Cory took the training wheels off his bike. Of COURSE we had to finish breakfast and go for a walk/bike ride. 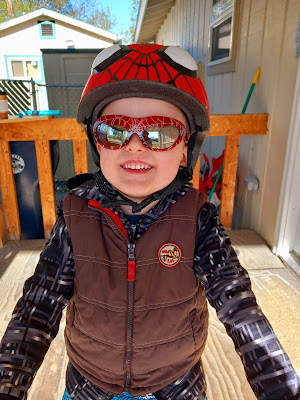 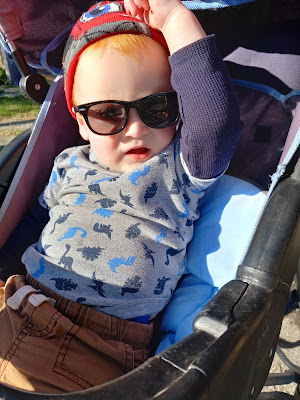 This boy can RIDE. He managed gravel, pavement and grass. As we walked I remembered a little neighborhood "park" with pavement, a basketball hoop and grass. We headed over there so Benny could ride to his heart's content and I didn't have to worry about traffic. 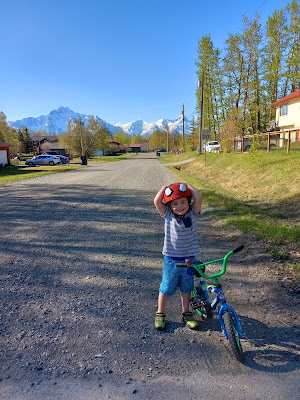 This park is down an alley way and is bordered by backyards of houses. 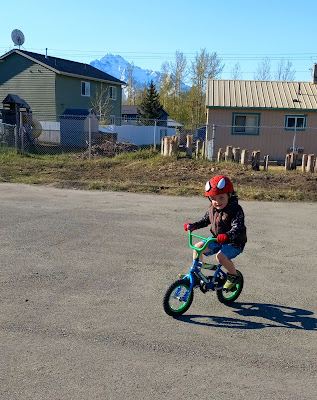 I loved watching the boys play ball together....Benny and I played HORSE...hopefully the first of many fun outings. 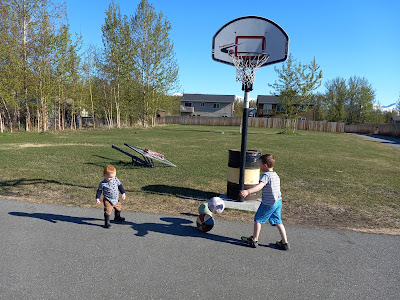 Benny made quite a few baskets. I quit counting at 5. 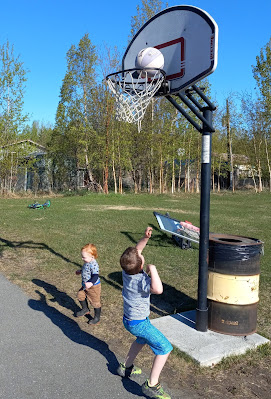 Danny was NOT going to be outdone and figured out a way to make his own baskets. 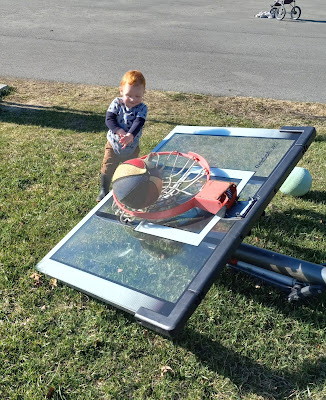 Bubbles! Simple delights.
We continued our walk down a new to me road when we left the playground. We walked/rode up a big hill and found ourselves at the "Hippo park." I THOUGHT we were going to stop and play but it became quickly apparent Benny had a different plan.
"Watch, Baachan, I can ride down this hill."

"I can do it..." and he was off.
I gave chase...trying to catch him before he reached the steep decline....and then Danny began crying. I thought he was upset by how fast the stroller was going. He wasn't. He'd slid out of the stroller. I picked him up, strapped him back in, and took off running with the stroller down the decline.

"Benny, stop before you reach the street."

We don't say, "Be careful," we give helpful instructions.  I must admit, parenting 5 boys, "be careful" became a fall back. We have learned to think of the steps we want them to take rather than telling them to be careful - which gives them a sense of danger but no clear-cut idea of how to deal with it.  Later, talking the event over with Arielle she said it is ok to yell, "Stop."
Um...yeah that was the word I was looking for.

Benny was excited about his accomplishment and thought he'd do it again.
"No, Benny. Baachan doesn't want to do that again."

"I didn't hurt my privates!"

This Baachan was perplexed.  I told him we were going to play at THIS park and we were not going to go back to the hippo park or ride down the hill again. He agreed.
Danny appreciated the tamer pace of THIS park over the mad dash down the hill. 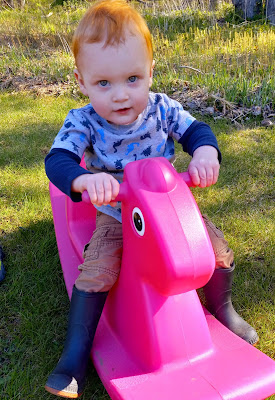 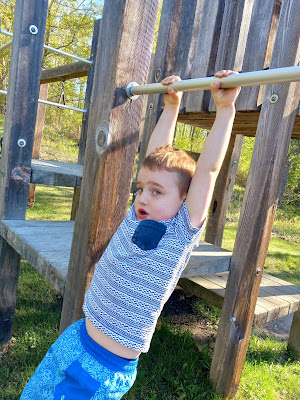 Back at home we decided to cuddle on the couch and watch some cavorting pirates on Disney. I had hoped Danny would fall asleep. Arielle got home before he could fall asleep. 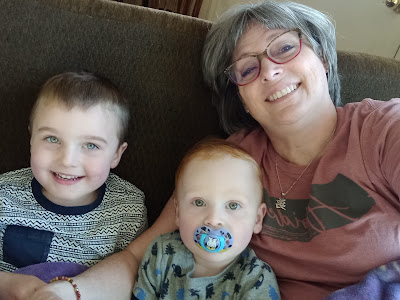 I knew Arielle would be fine with the boys and I going for a ride/ walk. I think we'll keep doing that now that the weather is nice. We all loved it. I shared about the mad dash down the hill, losing Danny, and Benny's perplexing comment.  I knew she'd laugh - and she did. Arielle shared he'd had a bad wreck a couple of days ago and HAD hurt his privates. Evidently, all activity is now to be judged by weather it hurts and if it doesn't, it's safe.  ::snort::

I do miss having a houseful of little boys...these two haven't started throwing bricks into trees yet...