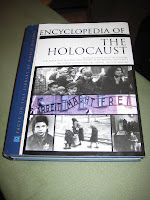 Look at the cool book to the left. This is a gift to us from Wanda, Walter and Dr. Gail. It is a gift we will cherish and use in our homeschool. I happen to have plenty of space on our shelves for new books at the moment. ::snort::

A few things that stood out to me after listening to the briefings presented this past week.... and in case the link thing doesn't pull up the post from 2007 that shows the survivor's quilt and such - you can find that here.

Holocaust - the word means "sacrifice or offering burned whole before the Lord".

6 million Jews and 5 million others perished at the hands of the Nazi German regime.

Judaism is "a religion with a strong cultural influence around it, not a race." This is important to note. Nazi Germany relabled Judaism from a religion to a race...and I suspect many of us, without thinking, may have the same definition. To be a Jew is to be part of a religion - the first to believe in one God.

Dr. Gail gave 7 or 8 elements that led up to the Holocaust...but I can't find the slip of paper I took notes on. If I find it, I'll post them. I found it very interesting to compare the history of the past with our current society. We are naive to think that genocide (a word created to describe the Holocaust)does not occur today or that it won't in the future.

Meeting a survivor and hearing their first hand story is both a burden and a gift. What will you do with their story to ensure that this never happens again? Those voices which deny the Holocaust are getting louder as the voices of the victims get fainter. Only 11 states require that anything be taught about the Holocaust. Six survivors in the Tucson group have died since September.

Other than the Yom HaShoa service, I think I've corralled my thoughts. Or, in CPE speak, I've down processed. I can move on with life and revisit the topic and thoughts when life is a bit less hectic.

BTW if you've read any of the above books, I'd love to hear your thoughts. If you have any diaries to recommend, I'd also love you to leave those titles.

The Courageous Heart of Irene Sendler. I actually stayed up to 11:00pm and watched that movie. I NEVER do that. It was awesome!

Thanks, Linda. Wanda said she was aware of or knew Irene in the ghetto.

I read A Bag of Marbles when I was a kid--in French. Maybe we read it in school? I can't remember. Joseph Joffo is a well-known French author, and the book, Un Sac de Billes, is his memoir of fleeing and hiding from the Nazis during the war.

Noemi Ban has written a book of her experiences (Auschwitz) called Sharing is Healing.

It's written at about a 5th grade reading level. Very heartbreaking - she lost most of her family. She frequently speaks to school groups in the Pacific Northwest.

I read several of Levi's books as a young woman and they scarred me. I could not read them again now. He committed suicide a few years ago. (Suicide is very common among survivors.)

Yes, suicide is common...and obviously big questions of who God is and why he acts or doesn't act.

http://reneesuz.blogspot.com/2009/04/lucky-child-memoir-of-surviving.html Here's a review of A Lucky Child that I just read recently

It Happened in Italy: Untold Stories of How the People of Italy Defied the Horrors of the Holocaust - this is a book I recently received for reviewing

Thanks for the list. I'll come looking for it in a few years when we study this time period again... but where will we find the list? I don't see a label attached to the post.

Here are few that I have read:
~"Tears of Triumph" by Doug Weed
~"Children in the Holocaust and WWII: Thier Secret Diaries" by Laurel Holliday

I am also fascinated by what happened to Germans who sought refuge outside of Germany during the War whether or not they were Jewish: One such memoire ~"Memories of Kazakhstan" by Berta Bachmann

I havent read any of the ones on your list, looks like a trip to the library is in order! ;-)

You'll do a search Cindy. LOL I got tired of a LONG list of categories. I could put school on it...but if you search Holocaust it will pull all posts with that. Much easier than having 83 categories to wade through.....which is why I no longer have a "family life" category - I figure most of what I write is family life. AND I discvoered the search engine works well. LOL

Thanks, Christina! Hope to see you tonight - plan to call this afternoon....we shall see how THAT works. LOL

My mom L. wrote me about a book written by the wife of one of her son's former teachers. "Once my name was Sarah." Sounds autobiographical. Mom L. wrote she was a Jewish girl from middle class who fled from Germany to China where she met her future Russian Catholic husband who'd fled from Russian Communist rule. His priest and her Rabbi refused to marry them. They finally found a minister friend to marry them. When the Japanese invaded China they fled to Austrailia and eventually ended up in the small N.J. town my Dad and Mom L. live in here in America.