After that He went out and noticed a tax collector named Levi sitting in the tax booth, and He said to him, "Follow Me," and he left everything behind, and got up and began to follow Him... Luke 5:27-32 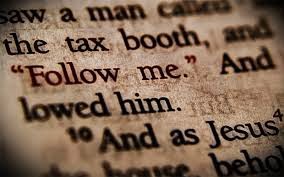 Tax collectors, in Jesus' day, were in a higher class than the average Jew. They had wealth and rank. Their job was to collect a set fee from local citizens and send it to Rome. They paid a fee to Rome for this privilege and they were allowed to add what they liked to the taxes for their personal support.  They would often sub-contract to worthless extortioners and hucksters. The toll booth was their office. Another well-known tax collector was Zacheus.

Tax collectors were despised by the general Jewish population. They were outcasts from Jewish religious life. Levi/Matthew was in the tax booth when Jesus came by. He may have been a sub-contractor - an  extortioner. He may have been the supervisor. Some facts in the passage lead me to think he was wealthy:


And there's another thought - Levi KNEW he was a sinner; this was revealed to Peter when he met Jesus. Jesus calls both those who KNOW they are sinners, as well as those who think they're doing pretty good, and He lovingly transforms both into His image.

Jesus says, "I have not come to call the righteous but sinners to repentance." (32) Jesus calls sinners to a change of mind and a change of heart. Most Pharisees saw no need for either. Many today see no need of either.

Jesus called Levi, the tax collector, the despised sinner to leave his wealth and follow Him. He called him to repentance.

I observe again this call to follow once again:
Levi - the hated tax collector, excluded from Jewish religious circles - becomes Matthew and enters into the Messiah's inner circle.

Matthew - Rome's employee - writes the gospel of Matthew introducing Jesus to us as THE King and showing both Jesus and gentiles the way to the Kingdom of God.

Repentant following of Jesus will have radical consequences in my life.

We want our lives to matter, to count. We want to leave a legacy. We want to do something great.

Joyfully Penned by DeEtta @ Courageous Joy at 5:09 AM