Back story: There once was a five year old girl who somehow down deep in her soul desired to have CHICKENS. Her daddy was an Air Force Chaplain and she must have become enamored with the chickens the Japanese farmers had around her home.  Her parents explained praying for chickens would not change military housing or frequent moves. The little girl confessed she wouldn't pray for chickens then, she'd simply pray for a house where she COULD have chickens. Mommy and Daddy agreed, though they thought the notion a bit crazy, if there was a home that allowed chickens, they'd allow it to.

When she was eight years old orders came down and the family prepared to move to California. The chaplain Daddy was replacing offered to lease his home to us - and he had chickens. In the end, we did not move into that house as it sold before we arrived from Japan.

The little girl continued to pray. It looked like it would be after Dad's retirement. No, the family was going to be living in a Japanese apartment - that wouldn't work. She continued to pray. Plans changed, the little family lived in an RV for two years, finally re-locating in Alaska - where many other family members had ended up.

Yes, we DID look for a home which would allow chickens as we looked at homes. Wouldn't you have done the same? She'd prayed for seven years at this point. We closed on the home too late in the year to get chickens....but much research and planning has been going on. The girl is nearly thirteen.....15 chicks were ordered to be picked up on the 14th.....
Thursday - I still haven't shopped for the week's groceries. Armed with knowledge from a gal from church about where to locally buy chicken feed and such....Stacia and I left to run errands. I thought she'd enjoy being part of the chicken shopping and then we'd get groceries. Michael was staying home - he was building a brooder so we'd be ready for chicks on Saturday.

We saw a $30 little brooder, sent Michael photos and conferred.  We also noted there were live chicks in the store!!! We would have bought them here if we'd known they would have them....but we have 15 on order in Anchorage - paid for.  We decided to buy the brooder and save Michael some work. This one was smaller than the one he was planning and it maxed at 15 chicks so we would not be buying any of the darling Polish chicks.  Stacia was beaming and really enthralled with the chicks. The gal who had been helping us asked if we were going to get chicks. I called Michael again, "If we put the brooder back ($30), we could get 3 chicks for $12 and save $18. 18 chicks will fit in the brooder you are building."
Michael said he could hear the smiles in our voices. He told us to go ahead and do that if we'd like. We still had to go grocery shopping and it wasn't wise to buy chicks and go on errands.....so we stopped by on our way back by....unfortunately, all the Polish had sold...but Stacia really wanted the cute Buff Orpington and we also got a Cochin (feathered feet) and a black one that we suspect is a barred something or other but they said to watch and see.  Michael is teasing us about Chicken Math, a real thing. Shame on you who thought we just did what we wanted without talking it over with Michael. 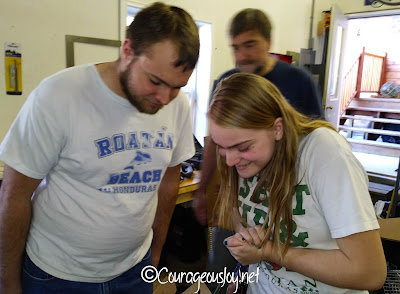 They must all three sit on the food - I don't know. 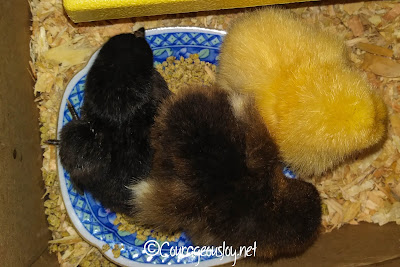 They must have names, at this point...the yellow one is Golda, our first chick, named after Golda Meir the first female prime minister of Israel.  The black one is a bit mean and is being called Diablo at this point. I'm not sure that will stick. The one with feathered feet needs a hobbit name - and we're having trouble finding a female hobbit name we love.

Yuuki, after all, is a bird dog. I dreamed of her loving the chicks....but she's more in pointing stalking mode, so she had to stay outside until they were safely settled. I tried to hold one close to her and it was not a good scene at all. 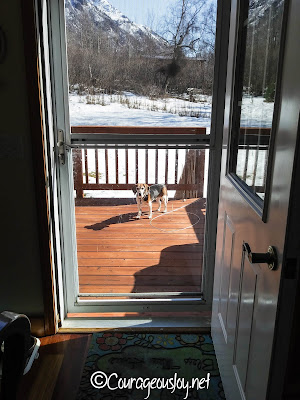 There's the story of how chicks came to our home 2 days early. These three will be joined by 15 more on Saturday.  Eight years of prayer fulfilled today. I felt a tad bit guilty about the fact that WE answered the prayer for her. I mean WE bought the home that would allow chickens, and WE researched and ordered the chicks......and then it hit me in my quiet time yesterday.....WE planned to be living in a Japanese apartment for the next 15 years....we had little to do with the plan of being in Alaska at this time and in this place. The power of a child's prayer.

If you'd like to hear and watch the fun - here's a link to the vlog.

Joyfully Penned by DeEtta @ Courageous Joy at 7:13 AM

I love the expression on her face as she looks at those chicks....
God is good.....

So excited for you! Let me know if you need any help. :-)