I've been praying for cohesiveness in our new neighborhood. I'll spare you details. ::snort:: Today I felt like it was starting with the children. Our kids were playing in the street with Windy's kids. They were having a great time and attracted other children. The kids drew 4 square, hop scotch and such on the ground and played games. They rode bikes. They skated.

Eventually another mother came out and I introduced her to Windy. She looked at the ground and said, "Chalk," in such a way that we KNEW she doesn't approve of sidewalk chalk in the street outside her home. ::sigh::

BUT the evidence of the seeds of neighborhood cohesiveness linger on this afternoon….may it spread as we seek to put on display the love of Christ. 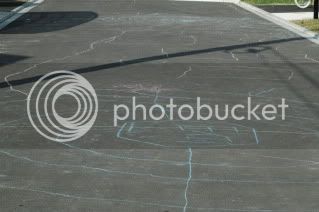 PTL! Looks like fun to me. Oh, Well, just move the chalk to your house or Wendy's house and the fun will continue.

Love the way kids are such ice breakers.

Isn't that amazing? I would be thrilled to see kids drawing in chalk on my street. Well, it wouldn't happen on my current "street" (narrow, one lane road with no houses!), but it would have been welcomed in our last house!

Mmmm....my neighbours were never happy about it when my kids were little. I don't know why, I think they thought it made the neighbourhood look scruffy. But, at least, here in England, it rains regularly and the drawings all washed away quite quickly.

All kids seem to love this activity. Grace and Jack used to enjoy doing chalking with Windy's kids a few years ago.

BTW, you couldn't show Windy how to use her blog, could you, DeEtta? I was there when she set it up, but she now *claims* it's all in Japanese and she can't update it!LOL!