I had asked about going to see Tops in Blues, but Michael said the tickets had gone fast. I was pleasantly surprised when I got an email from him late in the afternoon saying he had tickets and we were going.
Tops in Blue, is an all-active duty US Air Force special unit made up of talented amateur performers selected for their entertainment abilities. They tour around the world - in overseas locations a lot for morale, and stateside probably for "recruiting"? I don't know. But they're fun to see.
Our vice commander told the Japanese in the audience that we were thrilled to share a part of American culture with them.  The show incorporates a wide variety of music and is always a treat to view. I think I had as much fun watching the reaction of some of the Japanese audience as I did watching the show. I did wonder what they thought of some of the more boisterous American responses.
The theme this year is "We Believe" - and while show was EXCELLENT, I do wonder about the message, and since culture was mentioned in the opening comments my mind naturally considered what the choice of this theme says about the world view of our culture.  It seems you can believe in music, love, love songs, finding a new mate, children....as long as you believe first and foremost in YOURSELF. 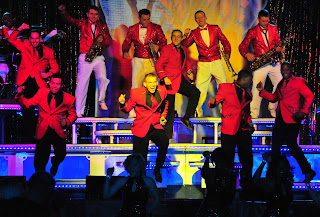 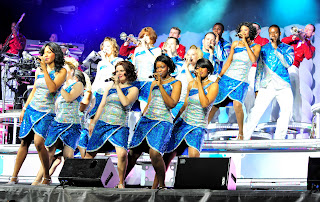 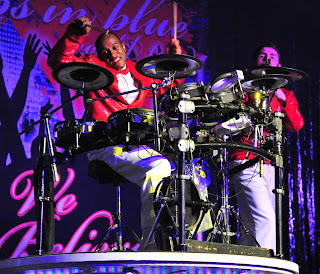 Near the end they had one song that very clearly was talking about JESUS - the redeemer whose blood on Calvary bought our freedom......which raised some more questions in my mind. 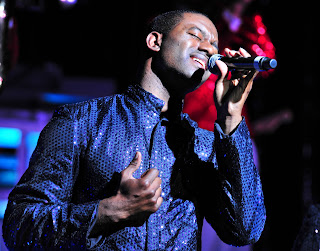 Are we saying Jesus is one more thing you can choose to believe in? As valid as any other option? Just "another option"? And......with such a push for "religious freedom and equity" in the USAF, why a song about Jesus and not Allah or Buddha or Rah.... Could it be somewhere deep in our culture we still know when talking about freedom and belief....Jesus is our foundation?
For the finale the group comes out in their uniforms and sing "God Bless the USA" - which nearly always moves me to tears. I remember clearly our church in San Antonio the week after 9-11. He asked all the active duty military to stand, they played this song, and prayed for all....and by the next week many were deployed.
It was a  great family outing.....Stacia and Zander LOVED the lights, the flashes, the loud noises....the older ones, Mike and I had a good talk about world view on the way home....and I bet we'll have more. LOL
Care to listen to a bit of the show?  Frankly they sounded better last night...