Today marked my last PWOC Tuesday in Japan....I had a great time with the kids and jumped in to watch the brand new board being installed for the upcoming year of ministry. Praising God for the leadership He provides each year.  I couldn't help think back to the past four years of PWOC. So incredibly blessed by the leadership Michael provided Susane, Elizabeth and Lisa as they jumped in to build a vibrant PWOC.  In the past four years I served as Titus 2, Retreat Coordinator, President and this year unofficial PCOC organizer in Misawa.  Until the past month Michael served as PWOC advisor....so PWOC is a big part of our Misawa adventure....a big part of the kingdom investment we both made here. It also wrapped up two years of serving as PWOC Asia Region President and the 1 1/2 years as PWOC Japan Region President...and of course I couldn't help think of how unexpectedly PWOC changed with the regional and international levels stepped down....a lot to think about.  There just aren't words at this point in time to share how all the "lasts" feel...so... Another last....another ending....but a beginning.....

I apologized,  I let him in....he realized I thought he was here to PACK...he was only here to do an inspection...and that was humiliating enough. I assured him things would be organized and the killer dust bunnies gone before his team arrives next Tuesday...but for now...we must make the most of each day with Jared.

It turns out my sweet groom forgot to tell me about the appointment.

Jared and the older two met a group of friends on base for more "Jared time."  I had hoped to have all over but it was not to happen. This will work.

Tuesday night was the annual Chapel Volunteer Appreciation Dinner. Madeline C stole my heart....what a joy to sit and have dinner with her and her family....  This dinner was another great chance for all of us to touch base with friends....and that would include Jared....the rock star College man returned home. ::snort:: 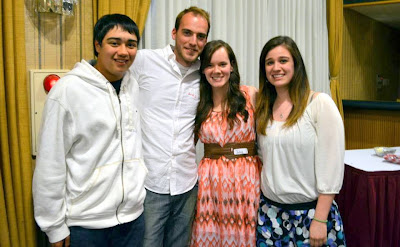 I believe with the end of the 0800 service, the end of MOPS and PWOC...we have about hit the lasts and have moved into the start of PACKERS and saying goodbye to good friends who are pcsing in June a month before us.