In Search of Margin

There's no doubt this has been a very busy season around our home. Dad has moved in with us,  which did bring a new list of responsibilities; Alex got a job - which adds a challenge to homeschooling;  WHO KNOWS WHY - but it's been a BUSIER fall than I expected, or scheduled for.  Contrary to Dad's oft repeated comment, I am NOT working 20 hours a day....but I HAVE been working hard to get life to cooperate in the search for more margin.


When things get chaotic - I organize! 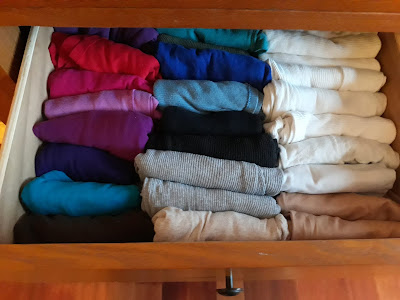 Don't judge me. Each camie brought me joy as I held it in my hands.  The ones that didn't spark joy were released to Bishop's Attic. It brought me joy to fold each one, and a sense of great satisfaction and order to color coordinate them in the drawer.... They've stayed that way.

Women's ministry has been on a break since the week before Thanksgiving...just a few days after the great folding extravaganza. School has been on break. I have been on break...and during break....I've helped CoRielle move...and am planning for getting the basement usable for us....AND I'm convinced those organized t-shirts helped me find the time to break away and organize my thoughts for the upcoming PWOC retreat. I now have five sessions roughed out and feel like I may actually have something ORGANIZED to say by the end of January.

I am feeling back in control enough to actually take the time to blog - rather than to sit in my chair and moan, "WHAT am I going to say to those poor women at the retreat???"

It all began with organizing and color-coordinating the camies. Try it.

Ignore the playful ribbing from your family.