I have had an ice related accident in every northern tier location where we have lived. Several in fact.  We arrived here and heard, "Do NOT get in an accident. If you do you will own the field, vending machine etc"....and "any accident is 50% your fault as it wouldn't have happened if you weren't in Japan." We live out in the country.....the roads are narrow (some are the width of one lane at home but are two lanes here) and twisty. There are no shoulders to speak off. There ARE little concrete "ditches" just the width of a tire along the side of many lanes. Veer into these and you are likely to blow a tire (which I've done twice come to think of it).  When we moved here I listened to my dh try valiantly to get us on base because he was worried about my winter driving..... I didn't realize this was a fear until that point. Then I realized I should be afraid....


They don't plow most the roads in Northern Japan. They don't sand the roads. We aren't allowed chains or studs either. We have no "special Japanese" tires....they simply drive slow and don't do anything about winter roads up here.  Ruts develop. I don't have 4 wd.  I managed to stay home most of last winter. This year, I committed to teaching on Monday night and Tuesday a.m. before I remembered the WINTERS. It's VERY hot and humid here in the summer - hard to remember snow during July and August. ::snort::


A dear friend, Anna, reminded me of the training we received at driving class upon arrival in Misawa: "We don't plow for many reasons. 1) too expensive 2) we never plowed so why start?" That was shared right around the time he shared, "Roads very narrow with deep ditches. If going to have an accident, just close eyes." And well after he said, "If train coming and bar comes down and you are trapped, just bump it with car, it will open." :-P


Monday I was TERRIFIED when I had to drive to base for a meeting. I arrived at the front gate with tears running down my face and lost it when I saw friends at the chapel.  Mike drove me in to teach on Monday night. He also brought us in on Tuesday. We spent the day in and came home at the end of the work day. This cannot keep up.


Today was MOPS. I drove Arielle, Stacia and I in. Tanya (another friend) had told me to drive slow...so I did. Drove the speed limit 30 - 40 kph (about 20 mph) or lower all the way from Oirase to Misawa AB. Per the instructor's advice, I prepared to close my eyes if I began to slide. I prayed and we left. We got stuck trying to get out of our driveway...finally sped out and we were on our way.


Note he is SHOVELING THE SIDEWALK and putting the snow into the street. ::snort:: 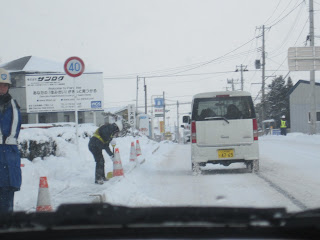 I was heartened to see the gentlemen throwing sand under our tires at one tricky intersection. I've never seen this before and wondered if they were angels....I guess this is "sanding the road" in Misawa. 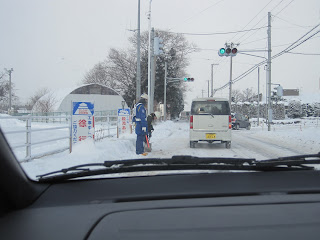 I did not cry. I did not have any near-loss-of-conscious-adrenalin- rushes. Christie (another friend and MOPS steering member) told me a great route to come home. She also told me not to even attempt my normal route - known as "Suicide Alley" to my family - until the roads thaw. It would seem you can't see the little ditches on the side of the road as they are all covered in snow.


I'm still going to drive very slow....but I was proud to have driven us in.....and will do so again in the upcoming week as needed.  FWIW, I think the reason so many Americans get into accidents OFF BASE is that the roads are shoveled, salted etc on base. If you live on base and drive off it would be very easy to forget about the winter roads off base. LOL  I'm always relieved to go through the gate and hit clear pavement.


Anna made these darling little guys for her preschool moppettes. This is Stacia's last year at MOPS. 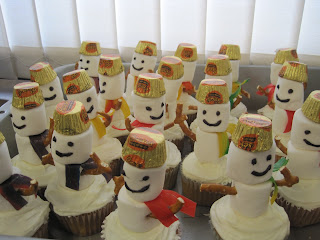 If I hadn't conquered my fear I wouldn't have seen these OR learned that Jesus was born in Hachinohe (that's where the babies come from) in 1958! Bet you didn't know - did you?

Joyfully Penned by DeEtta @ Courageous Joy at 12:16 AM 3 Gracious thoughts