Twas the Saturday Before Christmas....


We've enjoyed a somewhat lazy day today. I read a few chapters from The China Study. The kids have Japanese class on Saturday mornings at 0800.....at 0730 we discovered my computer was on the fritz again. Michael had to reload Windows 8 - again. The kids shared one computer for their class today. 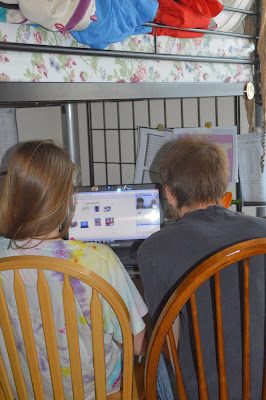 We had nothing on the calendar today and our Christmas shopping is finished. Michael hung a few photos for me. 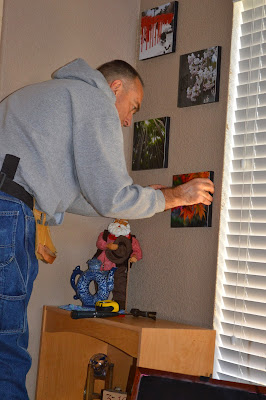 I tried four new recipes I found on the Ultimate Daniel Fast website.  All the sweets around here are beginning to call louder and louder to me. It was time to get intentional and see if I could find something (other than fruit) something chewy that was sweet...a treat.  I made some snacks up that will be something different - but still no chemicals, added sugar, leaven or chocolate.  I made Almond Butter Bites, Date Honey, Oatmeal Raisin Cookies, and flatbread.  The Date honey is really sweet....I can see using it when making the Oatmeal cookies will make them sweeter (I used unsweetened applesauce).... I settled for "frosting" a cookie with the date honey. LOL Recipes will follow (so I don't lose them) but I've linked them above if you you'd like to check them out before I post.

The kids had a Skype planned with friends in Japan, but somehow the timing was off.....so....

Michael and I went to Walmart. I discovered the first real downside to my new camera. I've gotten used to carrying a 5 lb camera in my purse. I'm a fairly good quick draw...but today I realized I can't be discreet and snap photos of the hilarity at Walmart. I no longer want to flee for the door in 5 minutes. The hilarious thing is after one particular couple walked by Michael mentioned it would be nice to have my pocket camera. ::snort::

I braved the pressure cooker again for dinner. This time I made a yummy homemade soup in 7 min - tasted like it had simmered for hours. I enjoyed  flatbread with it while the others had garlic bread.

The night is winding down and all are heading to various posts. I think I'll go read another chapter or two of The China Study.

Chaplain with a Heart for Ministry


Arielle cut Michael's hair on Wednesday. Michael is taller than me. Today as we all sat in the living room, I noticed a strange glint. 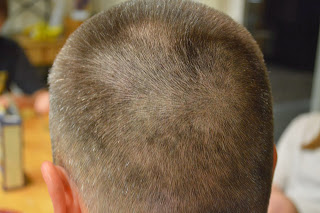 "Arielle, did you shave a heart on your Dad's head?"

Not wanting to admit to any hair accidents she responded with, "He's the Chaplain with a heart for ministry."

Um....well....not really in regs....and I can't believe none of the guys TOLD Michael to get himself to the base barber. ::snort:: We tried Walmart today but the Linda Walmart doesn't cut hair????

You know his kind reaction, the fact that he's paying her to learn...all show he certainly is a good sport and has a heart for his daughter.


We've realized several of our new favorite recipes have not been uploaded to the blog....so I'm trying to get recipes caught up.....this is one that floated around Facebook for a week or two. 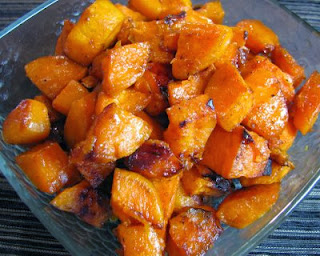 Peel and dice the potatoes and place in baking dish.

Melt butter and pour over the potatoes along with the olive oil, brown sugar, cinnamon, nutmeg, ginger and salt.

Add more sugar or cinnamon if desired - I didn't.

Stir once or twice during roasting.