{Some wondered WHY we were on the road at 0422 instead of 0500 as planned. It has to do with time zones and hotel clocks. One party knocked on the other party's door at 0407 and said, "Are you ready?"  Personally, I think 7 minutes was gracious.  The other party remarked they'd planned to get up in 23 minutes but would get up now. Wherein the first party remarked it was 0507 and the other party not so graciously replied clocks in this room said 0407. HOWEVER - 15 minutes later all were in the van and heading down the road.....laughing, by the way. Life is much smoother since learned to choose joy.}

Breakfast beside the Gen Patton museum...which is not open this early in the a.m.

{The mentioning of General Patton led to Stacia commenting, "Wasn't Gpa G a General in World War 2?"  Um, no baby, that would be Chief Warrant Officer in the Marines.} 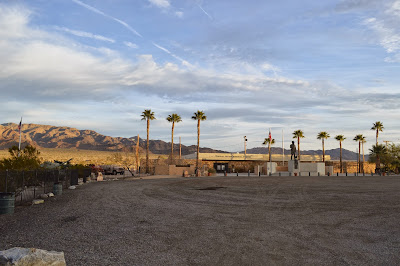 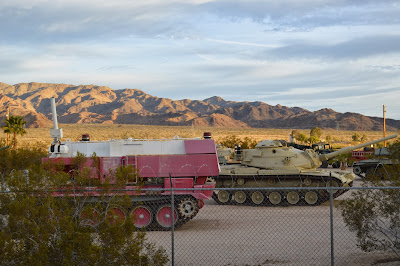 {STACIA was the one who noted he was missing - and she has been happy to remind him he would be stuck in the desert if it weren't for her.}

December 17 via mobile
Dog house in the pickup in front of us just flew out. We swerved, he kept driving. Bet he's surprised when he gets to his destination.
{We tried to stop him. We honked, waved...he sped up and exited. Honestly, I suspect he knew it flew out. It was BIG. We did not see a dog in it. Obviously, it wasn't tied in and if you go fast enough....}

December 17 via mobile
Longest roller coaster in America - hwy 395.
{Our goal was to avoid LA traffic - we did.}

December 17 via mobile
Walked into the men's bathroom in Patterson, CA....walked right back out.
{Thanks to helpful Facebook friends I remembered it doesn't matter which restroom one uses in CA.}

December 17 via mobile
Back in the land of slug bugs....the kids can quit playing semi trucks.
{Semi-trucks - like slug bug on steroids!}
Choosing Joy!
©2013 D.R.G.
~Coram Deo~
Living all of life before the face of God...

Joyfully Penned by DeEtta @ Courageous Joy at 6:54 AM 0 Gracious thoughts