Ox in the Ditch


A dear friend shared a piece of advice I sorely needed several months ago....Cathy, you were truly my Titus 2 in so many ways....she told me, "De'Etta, I don't do any work on any of these projects on Sunday...unless the ox is in the ditch."  It was a word I needed.....and so today....I kept checking and the ox was NOT in the ditch....so I did NOT tend to any of the many regional PWOC  or school prep things on the list.....I worshiped at home, I spent time in the word, I continued my study on prayer, I attended chapel and was blessed by the service of the word, I was refreshed by hugs and conversations with fellow believers.....

We are enjoying getting to know Dave and Beth, our new Club Beyond directors. We took them out to lunch. Evidently, Michael's ox is in the ditch...so we parted ways and the kids and I had a very relaxing day at home.

Relaxing to me means taking care of my CLOSET!!!! and putting a few more things into the  stack of boxes for the thrift store...or someone....and - yes I NAPPED.....

For two weeks I've searched for the missing sourdough starter. I feared it had escaped my kitchen and would somehow take over Northern Japan, as kudzu has taken over Southern America.  Jared couldn't remember what happened. None of the kids could remember. Michael was sure it was in the freezer. He maintained his sure confidence through the whole search. That's what a man of faith does. ::wink::

I looked through the fridge/freezer...nice to have it cleaned, I sorted through the deep freeze - repeatedly (need to defrost this week). No starter. The kids kept hinting they'd like some fresh bread. On my shopping list "bread - if you don't have time to bake" showed up.  I was telling them again Saturday night  I couldn't find the starter and would get more this week when Michael insisted it was in the freezer. I replied I'd searched repeatedly and couldn't find it...Jared didn't know where it was....Arielle, sitting at the table remained silent. Michael said, "Arielle - aren't you the one who put it in the freezer."

"Show me," I've found is often a great come back and worked well here.....

I was a little sheepish when she immediately pulled out a container....but it turned out it was "ice cream" I'd tried to make from almond milk.....(if it had worked it would not be buried in the deep freeze). Arielle dug further and longer and found it.

When asked how she'd missed the frantic-and-thorough-weeks-long search,  she said she was "reading and in her own world."  Ah, I've often gone to that world, how can you fault a person for missing details when they're in their world? Though two weeks is a bit troublesome. ::snort::

I fed and pampered the starter without a lot of hope through yesterday. This afternoon I discovered.....my sourdough starter had AWOKE...it's ALIVE....so tonight I made some English muffins and that and fruit will be dinner. 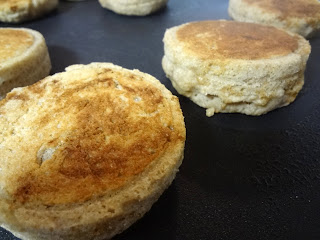 Michael called and it would appear a whole fleet of oxen are in the ditch....so we will continue to welax here at home....

Joyfully Penned by DeEtta @ Courageous Joy at 2:28 AM 0 Gracious thoughts