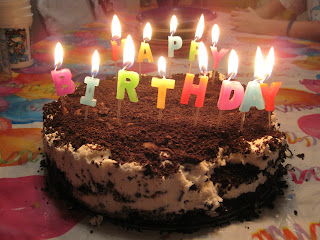 I'm not quite sure when or how it happened, but NOLAN - one of the littles - is now TWELVE!!!! Hmm.....I may need a new name for that category....maybe the sequels. LOL It takes a milestone like a "little" turning 12, suddenly standing inches above me, hearing a gravely voice from my "little man"....to realize that time is rushing on.
We are so blessed by the character developing in Nolan  right along with the height an voice changes. He's still a gentle leader but we do see him becoming more of a leader with the younger two. Nolan went with the classic pig hat for his special night. 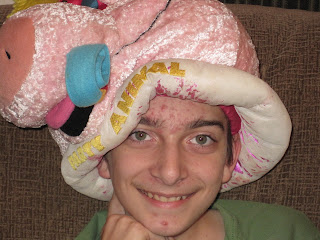 Zander had asked for "3 nunchucks"....when he saw this he said, "That's o.k. I can still get two nunchucks." LOL 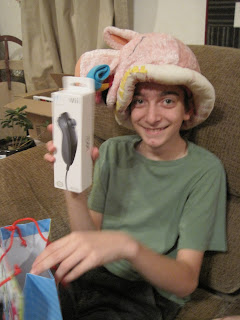 Mike and I owed Nolan a game from his last birthday. We bought a computer game and found it to be inappropriate...of course you can't return at that point....and then we couldn't find any that WERE appropriate over here.....all the kids games seem to have moved to the new gaming systems.....so we bought him this to replace the game we never found for him last year.....and he is THRILLED at the idea of being IN Monopoly.....but pointed out that Goecker Rules will probable not be allowed in Wii Monopoly. 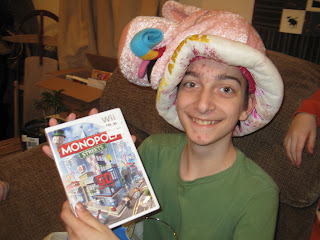 The kids got him a couple of more Mario Wii games and Voyage of the Dawn Treader - all of which needs to be ordered.....
We totally surprised him with a little ipod - a true sign of maturity around here as there is no way we'd spend that kind of money unless we thought he was responsible enough not to lose it. LOL 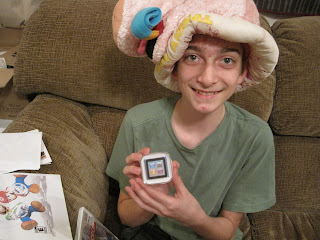