How do I capture a Sunday like this? I do not know, but it began Friday evening as I was struggling with the message for Sunday morning. I knew where I wanted to go, but I could not get away from the sense that God was wanting me to go another direction. So, we went another direction, but it just would not flow. It had much more in common with a wounded duck than a word from the throne of heaven. I struggled with it before, during and after the service. Where was the anointing? Where was the power? Where was the blessing? Not in the morning service. At least that is what it seemed like to me.

My brother, Josh, spoke in the evening service. He always has a good word. He has a public affairs type job, and he loves the Lord. His sermon title was "The Bad Times and the Good" coming out of Deut 8. It was a good message. We dismissed and the service was over, right? Nope. The good part was only just beginning.

The choir had continued to sing after everyone had left, which is normal. I was standing in the back looking in when I noticed a young woman in the back weeping. God was doing something. I came in and began praying with the young woman, and noted that there was more going on up front. It was the beginning of an incredible time in the presence of the living God. You know those times when you may be in a crowd, but you are alone in God's throne room - well, you and thousands of angels singing and crying out, "Holy, holy, holy..." This was one of those times.

I will have to do more thinking about take-aways, but I do have this: blessings occur in the context of obedience. This takes me back to the morning service and the wounded duck message. It is better to toss out a clunker in obedience than to release a soaring eagle in disobedience.

I do pray that this evening is a harbinger of revival in this place and in this land.

Joyfully Penned by Michael at 8:36 AM 2 Gracious thoughts 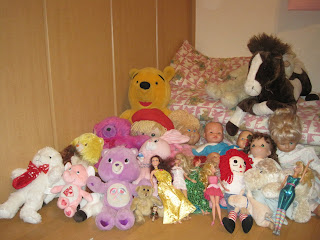 A few of these were handed down from BreAnne and Krista....gotta be good if it lasted THAT long. 28 days.....tick tock tick tock

Joyfully Penned by DeEtta @ Courageous Joy at 2:51 AM 1 Gracious thoughts

Our heart simply wasn't in the Air Show without Michael. I debated and thought of forcing it...but why? We stayed home. We Skyped with Mom and Dad and the girls. It was good to catch up.

We did some cleaning and had a nice Sunday dinner. I worked on how to present this week's Bible Study material and the kids played with lots of  kids in the neighborhood.

We went to chapel tonight. I do believe we are down to only 4 more Solo Sundays. ::grin::

Joyfully Penned by DeEtta @ Courageous Joy at 2:50 AM 0 Gracious thoughts