Michael left today for a 3 week TDY (temporary duty). He will go to South Carolina for a seminar on Marriage counseling and such. He'll travel to FL and see an old friend and his wife, the best man at our wedding.  He'll also try to catch up with some friends from Goodfellow AFB who are now down in the area.   He'll top it off by attending our denomination's National Convention.

Meanwhile, back at home, we'll do school, continue some weekly ministry projects, welcome Bre, and I'll go to Korea for Asia Region's leadership training seminar.  It will be a busy few weeks....but we're all excited about it.....

Except.....I discovered Stacia thought a 3 week TDY would be the same as an 8 month deployment.  I calmed her emotions last night and promised her we'd make a Daddy Countdown this morning.

The time for the promised project arrived.

Me: "Stacia, should we make a chain or get out the Daddy candy jar to count down until Dad is home?"

Stacia: "I suspect we better make a chain. Everyone sneaks the candy." ::snort:: 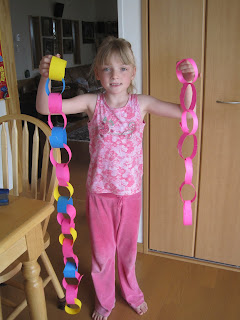 Note Zander's shirt in the above photo....it's one of Arielle's creations....creates a big A on it (A for Alexander).

Joyfully Penned by DeEtta @ Courageous Joy at 3:46 AM 2 Gracious thoughts

Kyle and Erika told us about Chagu Chagu Umako Horse Festival. This festival is in honor of the draft horses and has been practiced for 200 years. This is supposed to be a reward for the horses. They are decked out and trot from Onikoshi-Sozen-jinja Shrine in Takizawa to the Morioka Hachiman-gu Shrine in Morioka City. Michael had a men's breakfast to attend Saturday a.m. so we didn't meet the caravan to Takizawa.

We set out a couple of hours later though and had a great day. It was BEAUTIFUL weather. Not to hot and not to cold....we chased the horses around the route....always seeing wheelchairs being loaded and folks packing up....never seeing a horse. Finally - in Morioka near the train station we caught up with the horses!  They were beautiful, but we did wonder WHO thought loading a horse with so much finery and making them trot 25 miles in the hot summer was a great reward. LOL 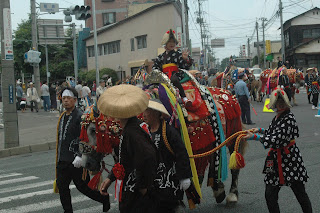 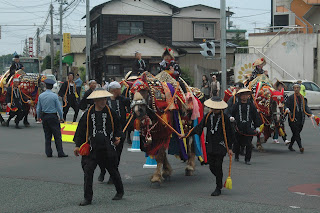 These little guys were DARLING. One little tyke was actually ASLEEP. 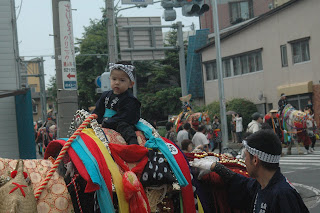 Stacia is partial to the ponies. 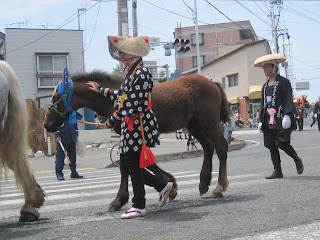 The Clean Up Crew 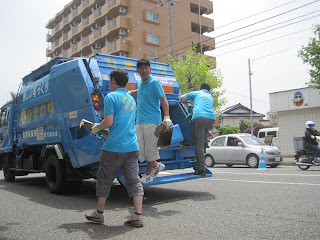 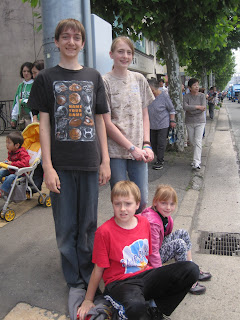 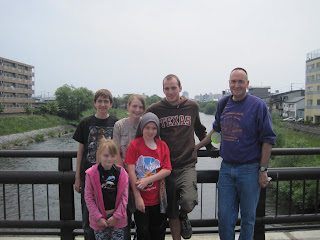 We walked back to Family Mart and bought lunch....chicken on a stick, some wonderful soft, chewy bread and fried potatoes..... Look closely at this box....right hand side of the box...see the little toothpick? They think of EVERYTHING here. 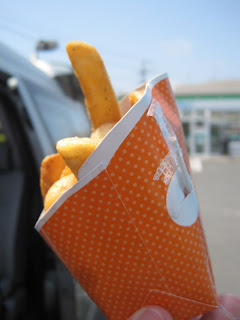 As we ate our lunch, I told Michael about the zoo. I wasn't 100% sure we could find it as we were in a totally different part of town...but really how hard could it be? He had missed our first zoo trip as he was playing with the camels in Afghanistan. He was game if I'd go try to get some directions.

I did....Arielle prepped me...in I went to the store....asking very nicely, "Morioka dobutsu wa doko desu ka?"  I thought "Morioka Animals" was fairly close to zoo....but I didn't have much luck. They kept telling me about the horses. I had to resort to my lion and monkey imitation AGAIN.  Ah....they got it but the map I bought from them didn't go up Rt 4 far enough to pin point the zoo.....A gentleman said he would show me how to get there. Um.....I told him I was sure there would be signs....He said, "They will be in Japanese and I think you may not read Japanese well?" ::snort:: I told him there should be pictures....no he and his friends wanted to show me how to get to the zoo....well....OK! I told Michael to follow the hybrid Honda. ::snort::  Wow - is that NICE??????? They took us right to the parking lot and it is good they did as we were in a totally different area of town than I thought. LOL

We had a blast being at the zoo with Michael.  Mostly, we loved being a family  together. We had company Friday night and that coupled with Saturday's outings set us up nicely for the three weeks that Michael will be gone. 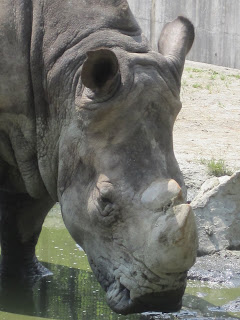 The Big Horn Sheep and Prairie dogs were hits....made me lonesome for Montana. The younger ones enjoyed the petting zoo. 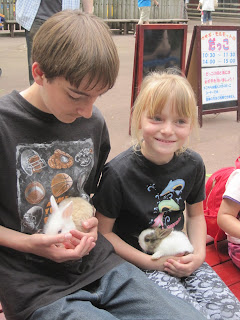 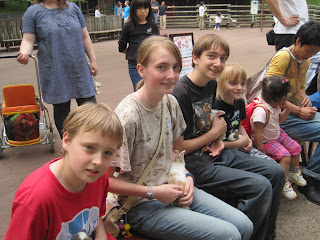 Any guesses as to the purpose of THIS sign? 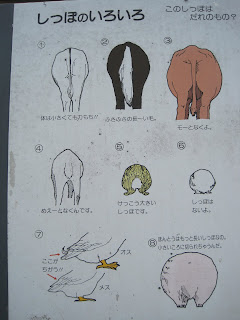 Joyfully Penned by DeEtta @ Courageous Joy at 2:17 AM 4 Gracious thoughts