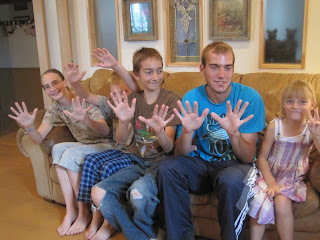 Really - to get the fun of the event you need to watch the video.

Joyfully Penned by DeEtta @ Courageous Joy at 8:50 AM 4 Gracious thoughts

Football Fever Wherein we discover we miss Coach Armstrong a LOT and the SACHSA SAINTS too. LOL

First Football Game of the season.......
Head Coach on the left...Jared is number 16. I was too far away to get good shots. Mike would have been down on the field...but I wasn't sure Jared would want his Mommy doing the same thing.
There was a  helmet mishap after a hard hit. Some folks behind me were talking about it and I piped up with the fact that that was my son, we've spent several nights tightening the helmet after it does this at practice, that this is reaching the level of a "deployment emergency" because we can't seem to get it to stay tight. At that point one of the dads told me to send it home with his son the next time it did this, and he'd fix it with some super glue and duct tape. ::snort::  One of the coaches told Jared he was a "smart kid, you can figure it out." Yeah.....but obviously....if it keeps coming loose and falling apart in practice..... oh well....I may go buy an electric screwdriver...or put superglue on the end of the screws before we tighten them. ::snort::
At one point Jared was hit with the face mask of someone's helmet. The doc and coach were checking out his chin and I feared he'd split his newly stitched chin open - but all is fine. It was the exact  spot and it was noted by the tech who had prepped him for stitches, that he's still not shaved.  LOL
No, I won't give this many details of each game - but then again I know Michael is missing being here to participate.   It wasn't a great first game....I mean they played a much bigger team, they always lose to this team...or so we were later told. We didn't realize that at first...Jared said when they made 3 touchdowns in a row he began to suspect something bad was up. 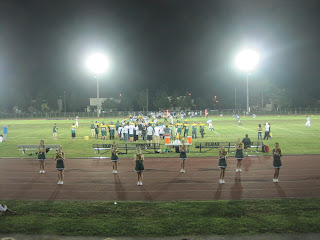 Jared had quite a bit of field time. He made a couple good hits, retrieved the ball at the kick off. This is about the limit of my football knowledge here, Michael.
Stacia seemed a bit confused. She was perplexed that there were no hoops at Jared's game. Her conclusion: "Hummph. In America Jared always won his games." One last comment Stacia made several times, "Jared needs his love hug". She's taken to giving us all Love Hugs.....and he said the best thing about getting stomped in football was knowing there was a love hug waiting from his 5 yo sister. ::sweet::
I learned not to wear blue when the Edgren Eagles play Yokota. ::snort::
Choosing Joy!
©2010 D.R.G.
~Coram Deo~
Living all of life before the face of God...

Joyfully Penned by DeEtta @ Courageous Joy at 4:57 AM 4 Gracious thoughts