The very best part of being medically stationary in OR? We have adult Gherkins nearby. Arielle invite us over for an hour or two this afternoon. Her Saturdays are long with Cory working. It was fun to see their new place. We discovered we are only 2 minutes away from their campus! 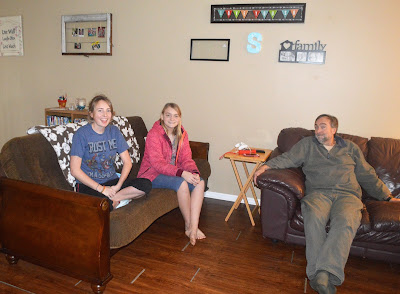 Arielle invited us to do a "snacktivity"  - she and Stacia made South American Hot Chocolate.

The guys played Snow Board Kids 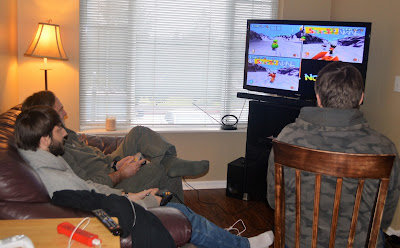 We were getting gas when BreZaak and Bella showed up. Bella has TWO TEETH. Oh, the cleverness of Bella! ::snort:: We knew it was coming. 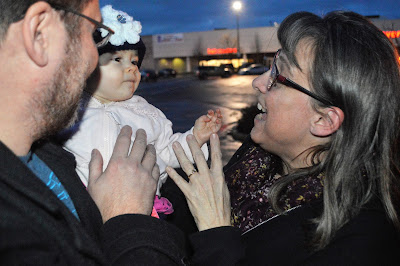 Those eyes still take my breath away! 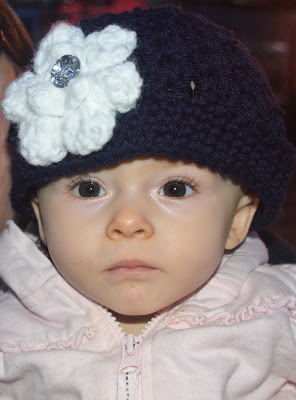 Our family has had quite a week. Much of it is NOT my story to share - so I won't.  Here is my part....this week has been wild.

We completed a great week of school and moved into a lovely home to house-sit for a couple of months.

I continue to fight my flu/cold.....all that's left is a nagging cough....I bought the "meth" mucinex and wore Vicks on my feet, steamed with Vicks several times a day,  and kicked the thing....sort of. I'm at about 80 or 90% well....sleeping at night is still a problem, but the recliner in the sun room works well for "sleeping."  My exhaustion could be due to the anemia we are treating. I'm trying to work up to 3x the normal dose of iron....I'm at double at this point and the doc said if that's all I can do, that's what we'll do. I like that attitude.

Between Michael, Dad and Mom I've gone to seven doctor's appointments. I'm starting to like doctors.  My favorite is still my new PA.

I experienced my own personal kind of purgatory this week. I went in for a mammogram last week. I was called back this week for a 3D mammogram. Then an ultra sound. Each time they said to "take a deep breath and stay still," I had a coughing fit. Many do-overs. ::snort:: It really was funny. The upshot is the radiologist/doctor determined I needed a biopsy next week and possibly a lumpectomy. If I felt it were medically warranted, I'd do it....but I felt they were being alarmist. He began the talk by telling me, "Since we have no prior history with you, we need to make sure this isn't cancer." I explained I could get records, have been aware of this since 2004, and wanted him to wait and review my records before recommending a biopsy. He said I was going against his advice.....and I said that was fine. I told him I could bring him FILMS. I think he thought it would take a week or two to gather records. I kept telling them I had what they needed at home.

When I showed up the next day, they told me they'd been trying all day to reach Beale and had gotten nowhere. I pulled out all the reports I'd printed from my medical records disc....AND....four FILMS I had kept with me when we moved into the RV.  They were shocked. I was told I rock. I told them when a military spouse says she can get the records - trust her. LOL

When we moved into the RV I'd asked on facebook where folks would store them and many told me they were obsolete and to get rid of them.....I was in my Konmari phase. Though I was downsizing left and right and committed to minimalism, I simply didn't feel right getting rid of them. I kept them in the storage bag under our bed. LOL The doctor was THRILLED to be able to read them with his own eyes and compare them to this years mammograms and ultra sound.  They saved me from a biopsy the week of mom's surgery.

Moral of this long story - 1. if you don't feel right getting rid of something, keep it and 2. there's nothing wrong with going against advice from time to time. LOL

We appreciate your prayers in this upcoming week. Dad has the flu and a cold. Mom is scheduled for her cancer surgery on 24 January. Another family member is having surgery on the 24th as well. I am thrilled to be in town and be able to help out.