Jamin loves to hike. Jamin often picks hikes the rest of us good-naturedly complain about. He and Jared called today to see if the boys would like to go an afternoon hike. Stacia said, "No way." It was supposed to be a 6.5 mile hike (round trip). According to the website I found it is 4.5 mile (one way). 🐽 I'm quickly learning these hiking websites are subjective. A hiker may rate  a 5000 foot elevation climb in .25 mile, as "easy,"  or a stroll around a paved, flat, lake as moderately hard." 😏 I think we need to find a hiker's guide with objective ratings we can apply to each hike.

The guys set out in good spirits. They took Mako, Maria's husky with them. He loves to run and I thought a hike may be fun for him. 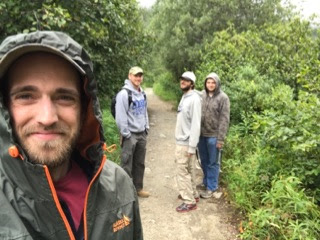 They headed to the Reed Lakes Trailhead in the Hatcher Pass area. 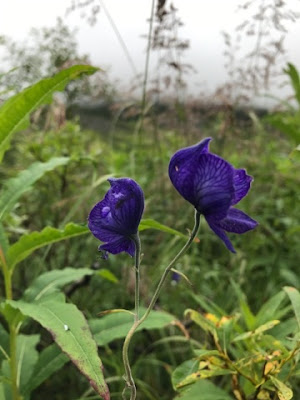 The first part of the hike is very easy (flat, wide trail), then after a couple of miles or so it goes up pretty steeply (there are switchbacks).  (From above website). 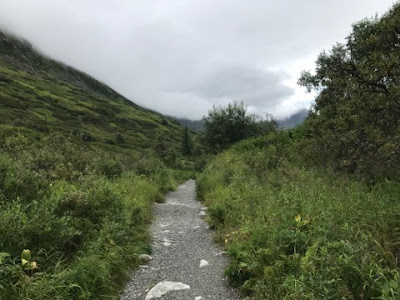 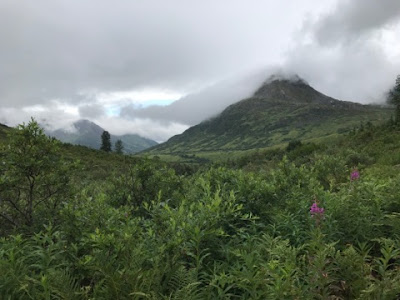 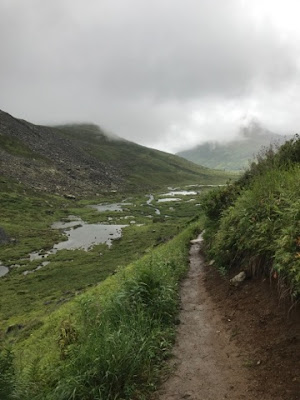 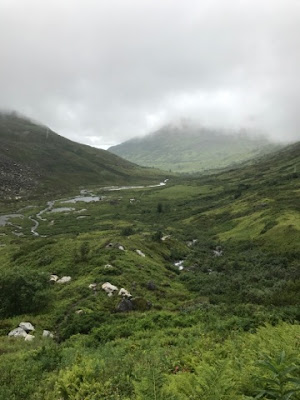 Next you have “the boulder scramble”. It is a filled with healthy sized boulders that you have to navigate. Not too hard, but not recommended for dogs or kids. Then, after a brief period of flatness, it climbs once more and you see Lower Reed Lake for the first time. 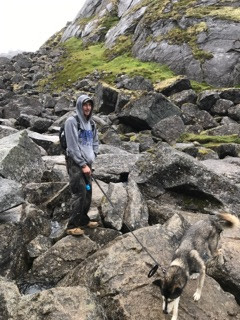 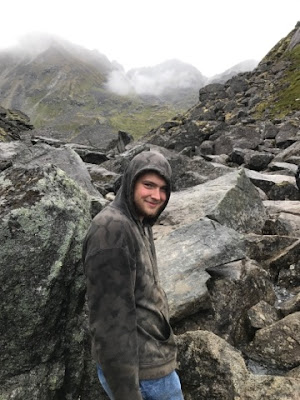 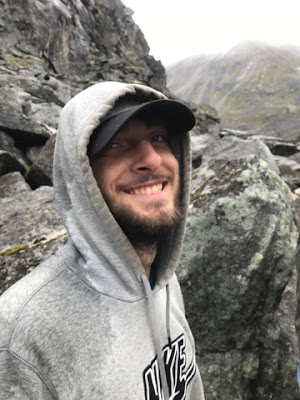 Mako decided he had had ENOUGH! He put all four paws around a big boulder, seemed to straddle it, and refused to move. Jared carried him. What a guy! 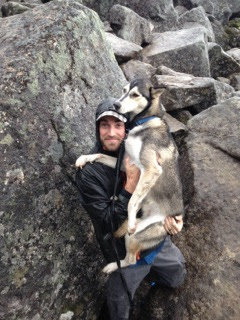 We waited for them to get home before we had Sunday night ice cream. They reported it was cold enough to see your breath. Fall may be on it's way...but never the w word.

Sundays are for Resting

Michael and I are living out our limitations as we unpack. I have been in excruciating pain with my hands the past few days, Michael has been in pain too but he's much more stoic than I. I have begun taking Naproxen around the clock, and taking breaks for heat and ice quite often. It's hard to determine which body part would benefit most from the heat....shoulders, neck, back, hands or feet. 🐽 Watching us, Maria declared, "Sundays are for church and rest."  We needed both.  We have been taking a leisurely pace, but a Sunday nap did sound nice.

The five of us, and Maria, began the day at a church we'd previously tried. The church seems to be in between pastors and I wonder how a new pastor will affect the culture. There are things we like about the church - MOPS, AWANA, location. One thing that is off-putting, is we've not been greeted, had our hand shaken, smiled at or engaged in conversation once - in two weeks.  The preaching was fantastic this week - but it varies week by week. However, Cory and Arielle went to the later service. Cory was with Michael the first week when no one talked to them. He confirms their invisibility. Arielle must be the magic, they were approached by four people. Nonetheless, the sermon gave us "food for thought," and challenged to passionately walk out our commitment to the gospel of grace!

We tried a new cafe in town after church. The food was great, prices seemed high; prices at all restaurants seem high in AK.

We settled in for an afternoon of rest. Sort of. Josiah came by to hang out. He and Michael went to SEARS in Wasilla. They straightened out a mess made for us by SEARS/Anchorage and earned our loyalty - even if we have to wait for things to be shipped to them.

Maria and Stacia made cookies. Maria had never done this before. It was fun to teach her something, in return for her teaching us how to make Puerto Rican rice and beans.

I took some naproxen, heated up the rice bags and promptly fell asleep for a couple of hours.

Michael - right by the garage door - didn't fare so well. He is determined to "get his garage back." He's not had one for two years.  I support this goal. I want a clean and organized garage and I also suspect many of our  missing items are still in the garage somewhere. Josiah and Izaak helped him get the shelves built.

The boys and Mako (Maria's husky) went on a hike with Jamin and Jared.  This is getting long, I'll do another post for the hike. When the boys got back from the hike all of them and BreZaak joined us for "Sunday night ice cream."

Life's routines are establishing themselves in the new home.

Joyfully Penned by DeEtta @ Courageous Joy at 6:53 AM 0 Gracious thoughts