This is a long post - perhaps one can excuse the length as it covers three days of exploring Mount Saint Helens.


Day 1
We are "camped" here between I-5 and a very active train route because it is close to Mount Saint Helens. We had an unbelievably clear, sunny, warm day and took advantage of it to explore the mountain. We downloaded a brochure titled, The Road to Mount Saint Helens, and took off.  The brochure listed the mileposts of the various centers and view points and told us a bit of what to expect. We also found much helpful information on the Forestry Service's website. Throughout the day we watched various tours herding through the centers and going on various hikes, but we were content to be on our own self-guided tour. We spent considerably more time than any of the tours we saw.


We zipped one exit up I-5 - (49) and turned East on Silver Lake Hwy (Hwy 504) towards the town of Toutle, WA. The mileposts are seen on the right hand side of the road before you reach the various centers.
Our first stop was the Mount Saint Helens Visitor Center at milepost 5. This center is run by Washington State Parks, and they do an outstanding job.  It is 45 minutes from the ridge, but I recommend stopping here first. There is a great view of the mountain, an informative film presentation, and some fascinating exhibits to explore. Stacia had her first experience with the Jr. Ranger program here. We will do this whenever possible - the workbooks helped us ALL get much more out of the experience. ::grin::  The center's focus was on the geology of the area. Entrance fees are $5 for adults and $2.50 for 17 and under. 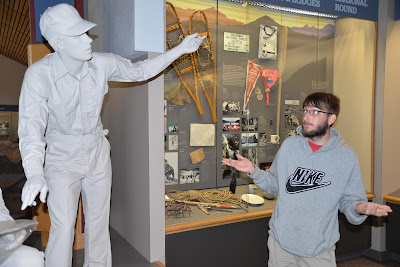 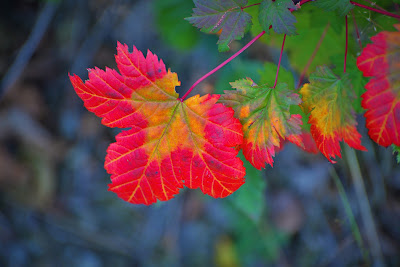 At milepost 19 we visited a buried A frame. This little home, 30 miles away from the mountain, was damaged and half buried by the mud flows that followed the eruption. There is also a 28 foot, concrete, smiling statue of Big Foot here. Some say this is the "grave of Big Foot" - though others would consider that to be heresy on a variety of levels. Nearby is the location where Megan Masser supposedly sighted Bigfoot in June 1991. This is a free stop. The gift store has a giant collection of t-shirts etc. 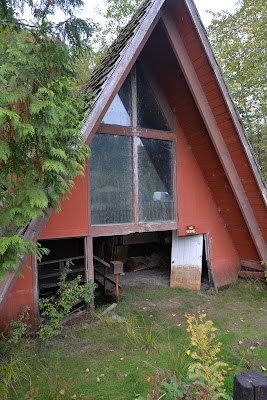 Continuing up Hwy 504 we passed many spectacular viewing sites. Most have info boards to tell one what is being observed. 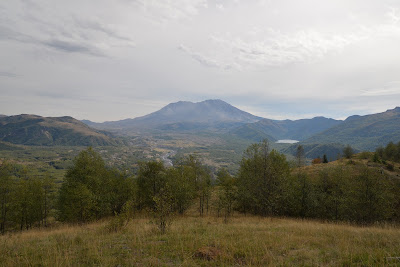 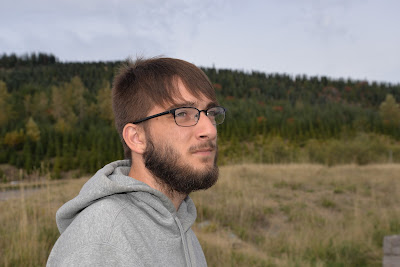 The time was getting away from us at our leisurely pace of discovery. We opted to drive to the furthest point, Johnston Ridge Observatory at mile 52, to conserve time on future days of driving. Johnston Ridge is the closest viewpoint of the crater and hosts an EXCELLENT exhibition center. (The observatory is named after David Johnston, a geologist with the USGS.  He was stationed on this ridge when the volcano erupted.  He perished in mere moments following the eruption leaving a wife and three children bereft of their husband and father.)  We watched a film about the events on May 18, 1980....at the end of the movie, the curtain drew back, the lights came up and we were looking into the crater. This is also called the Mount Saint Helens  National Volcanic Monument and is run by the USGS.  The area has been set aside as a science experiment.  Geologists, Ecologists, and Volcanologists work daily up here observing the changes which have already occurred and are still occurring.  The ranger talks are fascinating.  They expected it would take at least "a thousand years" for any life (plant or animal) to return to the blast zone. Life returned quickly.  Canyons were created in hours rather than millions of years. They've been able to take their OBSERVATIONS from this explosion and make sense of things seen in other areas around the world. I'm not doing justice in my description. This is a spot well-worth the drive.  They also had a Jr. Ranger program in which "Stacia" participated. We have a one year military National Parks pass and that was accepted here for payment. Fees are $8 per adult and children under 15 are free. 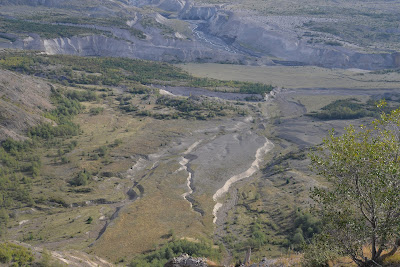 Above and below views are from the observation deck just outside of the observatory.  You can see the new course of the Toutle River in the above photo.  It used to run out of Spirit Lake, but that bit of geography has completely changed.  It now runs directly from Mt St Helens.  In the below photo, you can see the far southern corner of the new Spirit Lake.  Most of it is out of sight from the observatory.  They say that in the moments following the blast, the wave of debris and the pyroclastic flow buried all of the lodges around the lake (Harry Truman's remains were never recovered - presumably buried under hundreds of feet of earth, ash and debris) and pushed the waters of Spirit Lake up the side of the mountain on the far side.  When the waters rushed back into the lake, they brought what is estimated as a million trees with them.  The lake was/ is choked with trees, but even here there is new life appearing with fish (some think transplanted in by some do-gooder), otters and wildlife in abundance all around it. 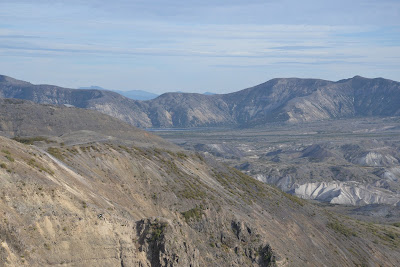 Ranger Janet did a good job of introducing the HUMAN side of the story. Most of our day had been spent looking at the scientific, geological side of the eruption.  Standing at the top of the ridge, it was easy to imagine the forest, the camping lodges, the hunting and logging that happened on Mount Saint Helens.  I find myself empathizing with the human side of these stories much deeper after experiencing the 2011 Tohoku Earthquake and Tsunami.  This quote from Christine Colasurdo  after she'd visited her family's lodge on Spirit Lake (Spirit Lake disappeared) moved me to tears, "I've been here before, I murmured.....But not only had I lost an entire landscape, I myself was lost - a stranger in what should have been familiar land."   A stranger in what should be familiar land - that resonates with me.

﻿
The logs laying on the ground and the jagged stumps are remnants of a once  lush  and majestic forest.  The 18 May eruption laid waste to everything in this area within minutes.  240 square miles (the exact number varies according to the source) of forest  were broken off, knocked down, and thrown like match sticks  by the violence  of the eruption. 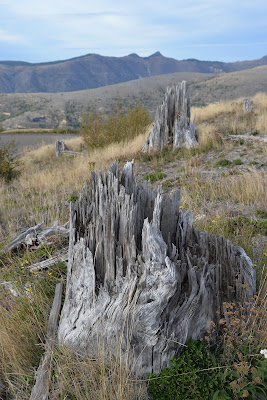 There were lots of warnings an eruption was coming. Nonetheless, 57 people lost their lives, and many were injured. Most expected the eruption to go skyward rather than blast out laterally.  The biggest blast zone known for a lateral eruption was 5 - 6 miles in a Japanese eruption.  People thought they were safe and outside the blast zone but were, in fact, in grave danger.  We knew we wanted to explore the human story a bit deeper.  We did learn the stories of Harry R. Truman (not the President nor related to the President) and David Johnston.  We've had several conversations about the choices Harry made and wondered what choice we each may have made. 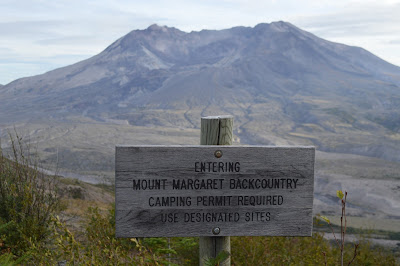 It is hard to imagine, but as deep as the front of the crater is, the mountain top used to stand that much above the top of what is known as the "Curtain Wall" of what is left.  In other words, it used to stand 1,300 feet taller than it does today. 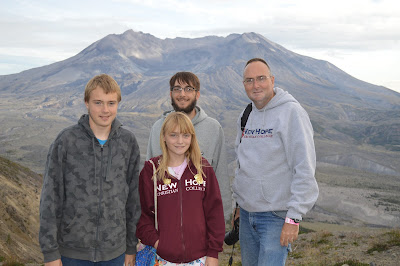 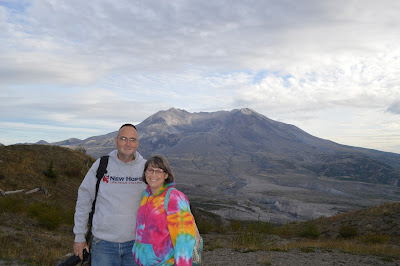 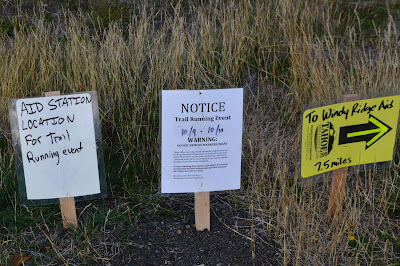 We ended our day by hiking the ridge behind the observatory. We would love to have had more time, but the sun was setting, and it was time to make our way down the mountain.