Dairy Queen, Wal-mart, Best Buy....none of them did it.... BUT yesterday the girls and I visited the NEW public library here in San Angelo.  For the first time, I had a twinge that felt a bit like, "Gee it may be nice to have a stateside assignment."  We MISS being able to check out books we can read from a library. We forget we miss it as we buy or get free so many electronic books....but wow.....this was heaven.  Visit it here for yourself....

They were working on this the whole time we lived here. We WERE a bit disappointed with the lack of technology (online reservations, online account management) when we were here. They said they were upgrading at the new library and wow have they ever! It's amazing. On top of that they have a cafe, a teen room, kids room, whole floor of fiction and another for non-fiction, cool nooks to sit and read, and a huge community room.

I LOVE the way they've merged old and new in restoring this old department building and turning it into an amazing place to enjoy. Here are a couple of photos I found on the web...if we get back down there (we can't check things out so we would go just soak it up because we're library geeks) I'll take more photos. 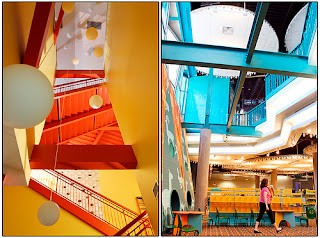 Great colors, cool lighting throughout - look at the decorations hanging from the ceiling to the right of the photo (can't remember the proper name). LOL 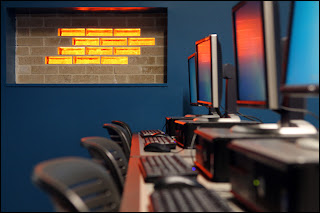 Glass bricks from the original building were used here and there and the glow you see here is sunlight in the Teen room.  Ivey told us today they bring therapy dogs in for kids to read too...and I think this is a great idea, one I need to explore for our struggling reader. They read, the dog loves them and doesn't laugh....

Last weekend it was the Civil War (UofO and OSU)....this weekend...last night was terrible. Noise in the halls, thumping, folks going up and down stairs....I nearly called the front desk. The thing is, my family ALL seem to have this deep-seated fear I will, "make a scene". I didn't call.

This a.m. I woke up to  chainsaws. I swear it was terrifying....sawing and strange sounds I couldn't place.  We've had a fridge making noises since we moved in. On the way to breakfast (which they close 1/2 hour before the end as they need clean up time - we're on it now and plan to MAKE it tomorrow) I noted housekeeping doing the strange things in all the rooms except ours.  It was either winter cleaning - or ?????

I've asked for THREE days for extra towels. We are in a FAMILY SUITE which sleeps SIX and they gave me four towels. I was worried a bit as they have a sign saying if you stain a towel they will charge you for it - so I'm wondering if going to Walmart for some towels would be a good idea anyway.....

BUT after missing breakfast because they TOLD me it would be served until 10:00 a.m. and nothing was out when we went down at 9:45 a.m.  (and not making a scene), after being up so late due to noise and being awakened to strange noises (and not making  a scene), I was DETERMINED to get a TOWEL.

I asked if I could have enough towels for each of us to have our own towel (ewww).  She said she has to "inventory the towels each day" - she proceeded to count and check the towels and then logged  she gave us five today. ::snort:: I really find it funny to speculate on why they have such strict towel regs here.  This is the 3rd Comfort Suites we've stayed at on this trip and we've not run into this yet.

Since we now had such a fun relationship - I asked if they were replacing fridges on our floor or what? She apologized for the noise and told me they are installing wide screen tvs and discovered the entertainment centers are too short. They were cutting them apart, adding boards and putting them back together again. We are in here for a week and were the only room they couldn't rearrange...so....I DID hear thumping, loud voices, saws and strange thumping sounds (Industrial Staple Guns). It wasn't a jet lag nightmare. ::snort::
Let it be on the record, through all this I not ONCE made a scene...though I came very close.  I miss the trailer.

This morning the kids and I went over to reconnect with dear San Angelo Friends. We drove into the driveway and Zander commented, "Wow - THEY'VE really grown!" ::snort:: There seems to be a lot of that going around. Four sets of our kids were friends when we lived here. Deja and I did a couple of co-ops together and homeschooled, shared the same OB...that sort of friendship. She even got Nolan involved in the Nutcracker one year. LOL Doug coached Jared's basketball team....and Jamin coached basketball WITH Doug for a year or so.  It was GOOD to reconnect and to meet the newest E.


We raced off to meet the boys for lunch. We spent an hour visiting and then they needed to run some errands and work.

We went to Walmart! ACK - overstimulated! I left with a headache...my WORD all the choices are simply befuddling.  We found it funny to find some of the same clerks. I visited the ATM and Nolan visited the barber....not our best selection. It will grow back...for now I need to find some scissors and even it up. LOL


Jamin came over for dinner. Josiah went to work. We went to Logans. Eating our way through San Angelo. LOL

On our way back to the hotel I ended up at our OLD HOME.....a strange mix of emotions...a couple of kids asking why we can't move back HERE...... Ah - memories. I realized we've not gone back to a lot of our previous assignments.


It was a full day....a fun day...we are looking forward to the rest of the family joining us soon. We're also looking forward to catching up with other friends in the next few days and fitting as much time in with these friends as we can. LOL

Joyfully Penned by DeEtta @ Courageous Joy at 4:08 AM 3 Gracious thoughts