While Arielle adjusted to living as an adult in Oregon, Stacia attended VBS in California, and Michael went back to work on base - the boys and I continued to sort and toss. The great Full Time RVer Prep Week.  Our goal was to make it through everything at least ONCE before the kids start arriving for retirement.

As we sorted, packed up, donated - it hit home - RETIREMENT CEREMONY IS IN TWO WEEKS!!! We'll still be in California for a bit after that - but our last Sunday at chapel is scheduled for the 9th. Retirement is the 14th. Jared and Larissa arrive sometime tonight. The others kids (and my parents) arrive between the 9th - 13th.  It's about to HAPPEN!

TMO arrives for our final military pack out in 3 weeks.

We will become "full timers" (RV) days after TMO leaves our home.

Michael informs us living in the trailer (and studying Japanese) will be boot camp for us. It will make living in a 2 bdr Japanese apartment much easier for us in the long run. I hope the typical Japanese apartment is a bit bigger than "The Caboose." I know they have better closets.

NOW - it means getting rid of about 90% of our "things."  We HAVE hit a few snags. It's humbling to see how easily "things" can grab hold of our hearts and how quick we are to snip at each other over things. It's not always been easy to put things in a pile other than TRAILER.   I've recently read a book on "tidying" - the premise is to touch every item you own and see if it "sparks joy." If it doesn't, you "release" it. If it does, you keep it. The thing is there are a LOT of things that DO spark joy around here that we are NOT keeping.  Will we need it to start a house if we don't go to Japan? Is it easily replaced (why store a cookie sheet that doesn't fit in the trailer's oven?) Does it have sentimental value?

We finished  sorting through 27 years of homeschooling material.....the stuff on the left are things I want Michael's input on. The top shelf (and top of the book shelf) are full of Precept studies I've taken or led, PWOC WILD trainer manuals and such ....I hate to recycle them...but I think that's where this is headed. I take comfort in the fact the Holy Spirit will call to mind or reteach anything I need.....the two shelves on the right are ready to go home with Krista after retirement. 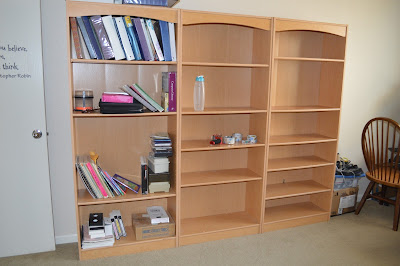 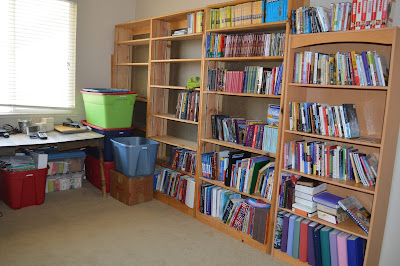 I wanted to get all our books to fit on the 3 shelves to the left - Michael and the boys made them. We succeeded. The shelf on the right stores books which were in our room and need to be sorted - ouch. The other two shelves are books that aren't school books, but we simply don't want to get rid of ....Original Nancy Drew, Tom Swift, Christian Biographies, Little House on the Prairie Set, Grain Brain Series, Cooper Kids,  Complete works of AA Milne... The BIG tubs house Tapestry of Grace books....one year each....and I have determined we'll need some spot to store a few things (like 3 of these tubs) where we can get AT them. We won't be able to access the things the Air Force pays to store.

See the clear tubs under the table? PHOTOS - I need to put them in albums.....I'm not sure it's going to happen and I have several BIG Creative Memory photo boxes of photos to deal with too.....Thank God for blogging and digital photos - and the END of photos to scrapbook!!!!!
Are you wondering what we DID with all our homeschool material? We gave it to the Airmen's Attic. They GIVE things away....and I'm hoping this stuff will bless others with kids at home. 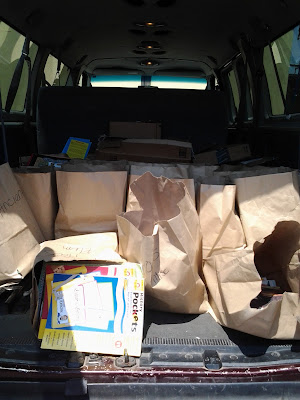 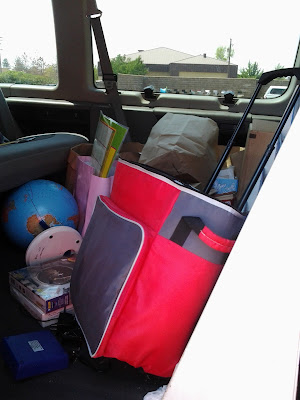 I went through my closet a third time! ::snort:: It's silly I couldn't do it in one fell swoop - but I couldn't. I am about to toss the Capsule Wardrobe idea for now (I have far too much color) and simply pick out my 10 favorite outfits and donate the rest.
Our goal was to sort through everything before guests came for retirement. We'll pause everything now until after retirement. The Gherkins will be relieving us of some big pieces (furniture, pianos, washer/dryer).  At that point we'll have a week to make the final cut and pack the trailer before TMO arrives.
I've gone through the entire house with the exception of: 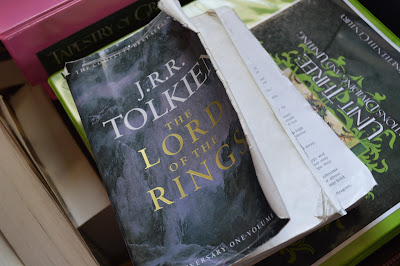 Lest you think we are being heartless - the kids can keep anything they think they'll want in the trailer and they can send to storage anything they think they'll want later which doesn't fit in the trailer. We are keeping this...though we have it on Kindle.
Nolan has informed me this is a must keep.....and we are. I love it.
I think it fair to comment I am being far stricter with myself than with the family. It's fair - I'm keeping my china. LOL
Michael continued to work on check lists for out-processing, argued with clinics about referrals, and sifted through his medical records.
By Friday - I needed to take a break and go get some snuggling....of the Spurgeon kind. 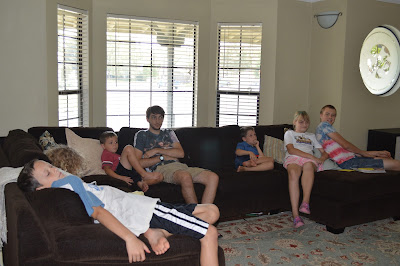 I spent a couple of hours snuggling with Eliana (even Joy gave me a hug). She has the cutest little baby snorts. I'm fortified to keep working. 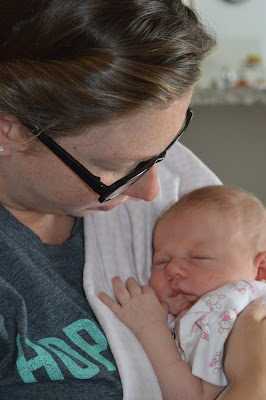 It's a lot of work but in three weeks, we should wake up with a new backyard view, no 0700 appointments and be able to go wherever we'd like.....probably to our state of residence to start a VA claim, register vehicles and such.  Or maybe we don't need to do that until the retirement is official - we should be able to stay in CA while active duty and not get caught in the great CA domicile snare. LOL  (Yes, that is a tease. We are STILL debating the perfect state.)
﻿

WHAT ARE WE DOING?

Several have been asking about our retirement plans. You can read about our Plot Twist here. For a Summer 2015  update of  "all those kids," click here.

There is no doubt retiring would be "easier" and more "exciting" if our original plan of getting to Japan as quickly as possible was still smoothly racing ahead.

All along we were, "moving into the trailer until details work out to get to Japan" - this is still our plan. Instead of months in the trailer, we are looking at an extended time in the trailer. We are excited about this. 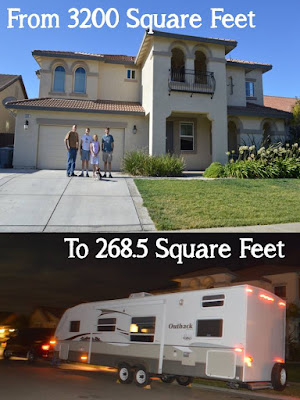 When we were told Michael had all the symptoms of  Parkinson's Disease(PD), we realized our dream of traveling the country in an RV when we were 70, may not happen.  It would seem this "pause" is the perfect time for us to take a sabbatical and live our dream...NOW.  We've now had two more neurologist's confirm a diagnosis of Parkinson's Disease. Michael has begun meds. We are not sure what this will mean for our plans to be missionaries. Our neurologists say to,  "Live your lives. We'll get through this together."  They see no reason we shouldn't travel or move to Japan. We are still researching how all of this will work with the military retirement benefits etc. We are in the process of a VA determination. Meanwhile, we are living in our RV, doing as much traveling as we can - living this dream NOW - why wait?

Frankly, we're tired. Bone weary. Michael hasn't felt well for a long time. We'd like to see what it's like to live with less ministry and schedule stress. Maybe it will impact health.

We are going to be Full Time RVers for a bit....we shall see what happens next.  If health issues clear and we can pursue living in Japan, downsizing and full time rving will be good schooling. If we are not able to go overseas as missionaries, we will have enough furniture to move into a small house....on our income a small house is what we can afford. Bottom line -  we don't need all the stuff we've accumulated. 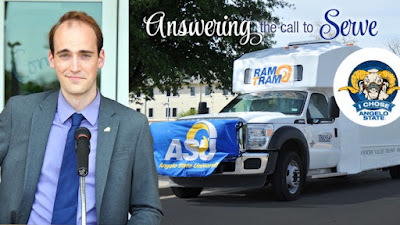 His family was stationed in Japan on March 11, 2011, when a magnitude-9 earthquake and resulting tsunami struck the island nation. More than 15,000 people were killed and more than 272,000 people lost their homes. His parents took a lead role in the recovery, helping the beleaguered Japanese.
“That made an impression on me, the idea of serving others,” G said. “That became the theme of my time at Angelo State, asking myself how I can serve the university.”

“From a very young age, I also was exposed to politics,” he added. “In 2004, I was told if our candidate won, I’d get ice cream. And whatever you think about Barak Obama or his politics, his 2008 presidential campaign really sparked a lot of interest in politics. I knew then what I wanted to do.”

“I chose Angelo State because of the stellar political science program,” he said. “Also, I had been on campus a few times with my brother, who was starting his degree, and I absolutely fell in love with the campus and just couldn’t imagine myself going anywhere else.”

“It took a lot of the right people in the right places,” he said. “ASU President Brian May moved mountains to get this done. It took a united SGA Senate. They looked at the issues and said we really need this. They voted unanimously to the support the plan.”

“As SGA president, I wanted to lead a culture change from ‘we can’t’ to ‘why not?’,” he added.
This fall, G is adding that desired internship to his résumé, spending the semester as the fourth participant in the ASU Political Science and Philosophy Department’s Government and Public Service Internship Program in Washington, D.C.

He will serve his internship in the office of U.S. Rep. Michael Conaway, working with 2013 ASU intern Chase Sauvage, who now works as a staff assistant to the congressman. G will live at the Texas Tech House with other interns from Texas Tech University and receive a stipend to help defray the costs of living in Washington, D.C. He will also earn six credit hours in political science.
“I talked with Chase and others about what to do to set yourself apart from the thousands of other interns in that city,” G said. “I’m really hoping to come out with a job in my pocket before I graduate. Chase is my inspiration. I’m really hoping to do what Chase did.”

And like Sauvage, G credits ASU for putting him on the path to his public service goal.
“There is such an awesome student-centered culture here,” he said. “Everybody cares about how you’re doing in your classes and in your personal life. It’s such a great support system.”

Laurel Scott is a news and information specialist at Angelo State University.
E-mail Laurel at laurel.scott@angelo.edu.

Joyfully Penned by DeEtta @ Courageous Joy at 4:48 AM 0 Gracious thoughts