Life moves at warp speed when our older ones visit. Chicken Divan is in the oven, rice is steaming, a salad is made and corn will be steamed at the last minute. I have a few minutes to update.


Sunday we had chapel, a soup and sandwich lunch, ran a couple of errands, bought more groceries (::grin::), and  watched Dawn Treader. Most of us loved it. Michael said he's a purist and wished they hadn't changed things but even he liked it fairly well.


This morning I roughed out week 3's "prompts" for James. If I just had a bit more time to edit.


I made about a ream of copies in prep for the start of James tonight and tomorrow a.m. I hit on this idea for the cover.....filled up the stickies (which are now on the pantry door to remind us all)....took a picture..... 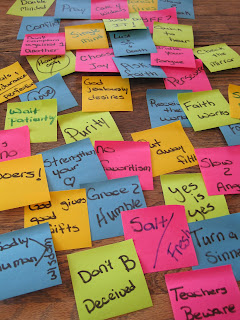 added "Real Faith" to the photo and wala - a cover for the notebook. We sorted and filled notebooks. Because we wanted to conserve chapel supplies, half the notebooks had other stuff in them that we removed, put in new folders and THEN filled with James. ::snort::  It was fun to have Jamin and Arielle's  help. 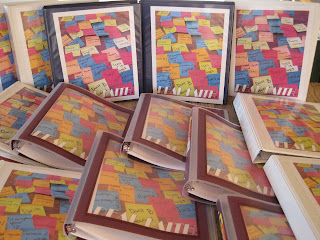 The kids have searched for Wii games. No luck - but we are starting to remember WHO had them last. Or so the kids imagine.  They've played lots of games today on the wii - we do have Mario that the boys brought and the sports and sports resort that come with the Wii. LOL
Michael should be home soon for dinner. Jared, Arielle and I will run in for Human Video, Youth Group and Bible study.
It's been a full day.
Choosing Joy!
©2010 D.R.G.
~Coram Deo~
Living all of life before the face of God...