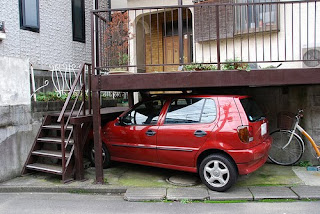 Shew....it's tough to stay on break! Today I struggled to keep my commitment to Mike to stay "free" until Monday.  I sort of fudged and sort of didn't. I did some local things I had time to do and wanted to do. I ignored new emails and old emails waiting for replies, as I'd promised I would do. Success....the world isn't  ending because my inbox is filling up. I don't have to  respond to email in 20 seconds flat, you know?  ::snort::

Yep - we found our very first Geocache in Japan, without Mike or Josiah along. We're fairly proud of ourselves. The first one was easy.  It was a spot we were used to Kurashi Wo Mamoru Mori Park (the park with the Miss Veedol replica and the tower).
Found one piece of "sea porcelein"
Jared is collecting bamboo poles
The second cache involved backing up several narrow Japanese roads, looking for a spot to turn the beast around.  When we found the cache it was worth it! Michael, we found the runway for the Miss Veedol flight. We'd never have found it without a cache to search for. LOL

Along the way we also  found a gentlemen "poaching" wild veggies from the protected forest. I didn't realize that is what he was doing until after we'd shared some engaging conversation....

Me - Konichiwa
He - different response than I expected - finally Konichiwa
Me - Kore wa nan desu ka? (What is this?)
He - rattled answer I didn't get
Me - Tabimasu? (eat?)
He - Hai, oishi! (yes, delicious)
Me - Tried a bite
He - salada
Me - My lips are tingling and swelling - what WAS that?

Our final cache was not a cache - we don't think. It was the coordinates of a local caching meeting....but I'm not sure they hid anything. We didn't look closely as there was a group of Japanese men enjoying their yakiniku and sake.  We did stop and enjoy the park.  A cute little park close to base. Another spot we would not have taken the time to hunt out without the aide of geocaching.

Another very relaxing day with the kids. I've NEEDED to play. Life has been all work for far too long. I must remember to take time to relax.  I'll be a better mother, teacher and leader if I'm rested.
Choosing Joy!
©2010 D.R.G.
~Coram Deo~
Living all of life before the face of God...

Joyfully Penned by DeEtta @ Courageous Joy at 1:28 AM 6 Gracious thoughts