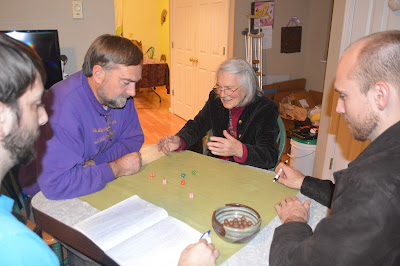 
Mom G tells stories of dating Dad G....he was always one for an adventure!

Mom G passed away this morning. She was 88 years old and was being treated for congestive heart failure. We expected it; yet we didn't fully expect it.
Mom was sharp until the very end. She spent hours these past few months reading Scripture and writing down various nuggets she discovered. She had a HUGE stack of index cards each listing a verse and a name of Jesus. She had stacks of "healing cards" for Michael and stacks of "Jerusalem" cards too.

When we were in Crescent City, she asked me to research the form for writing haikus. I did. She and Stacia wrote many together and shared them back and forth. We found a haiku on her table this morning....

Madeline Coffee
Earl's over the horizon
What do I do

I imagine she knew she would be seeing Dad Earl again soon.  We know without a doubt Mom Mary is in heaven with Jesus and Dad. Our tears are for our loss. We are happy we had the time in Crescent City and then here in Oregon with her.

It shouldn't be a shock, but it is.

I keep hearing Dad G shouting in his boyish voice, "C'mon Mary, wait till you see what's over this mountain." Much like he did when exploring the Matsu Glacier in Alaska.

Until we catch up with you both again, Dad and Mom,  goodbye  - for now!

Shoot! We neglected to get a candid shot of Jared and Larissa with Mom G. We'll add the family photo from the wedding later.

I'm pretty sure Michael will have thoughts to share at a later date. We covet your prayers as there is much to do.

Bella is developing a BIG personality at nine months of age - and it's a blast to be nearby as she matures.

Nine months old - she is saying a few more words, she still growls, and laughs and now she has TEETH. She's also putting on weight, proving to pediatricians she is just fine - simply on her own pattern of life. 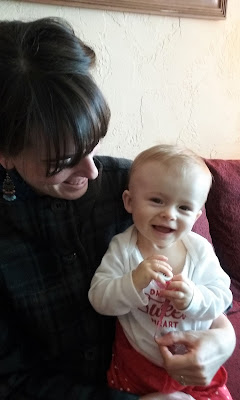 She loved opening gifts for her soon to arrive baby brother! I'm quite sure she didn't realize the blue dinosaurs and trucks were not meant for her! ::snort:: 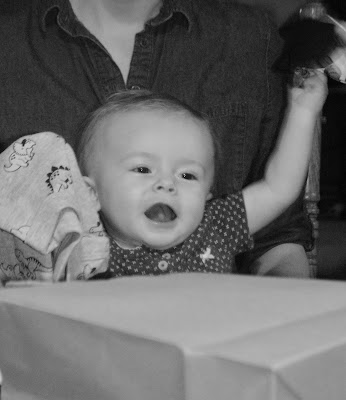 My favorite shot of Bella this month! 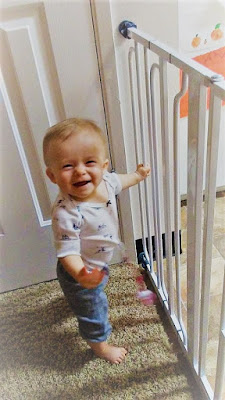 She is standing outside of BreZaak's kitchen. Izzak likes to cook and Bella loves to watch him cook. She gets very excited and happy when he goes to the kitchen, as she knows he will share whatever he is making with her!

Being two minutes away from our sweet Bella is the best part of house-sitting!

Joyfully Penned by DeEtta @ Courageous Joy at 4:52 AM 0 Gracious thoughts