The rest of the story

Other than chasing laundry, ponies and school, what did we do today?

Nolan and Zander were bothered by a news clip they saw while we are on base. I balk at not having TV from time to time, but I think this may be a good season not to have easy access to news. ::snort:: They had seen a clip where some yokels (and I've calmed down since this a.m. when I had to explain this) were protesting a funeral and in particular had a sign that said, "Thank God for Dead Soldiers." Imagine the talk I had to have with 8 and 10 yo sons.  It was hard to explain and remain gracious. We managed. It was rough. 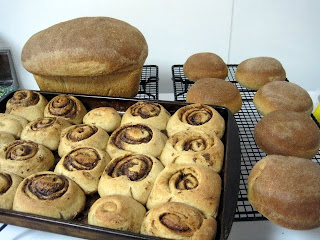 I tend to bake when "dealing" and today was the first hard "dealing" day of this deployment. It really did upset me to think of the way these poor families are being treated by so-called representatives of God.  We made 2 loaves of bread, 20 Cinnamon rolls, 6 buns and 2 bread sticks from the Seven Grain dough. 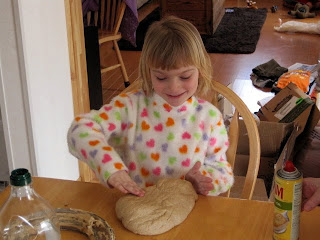 Josiah - I hope you read this - Stacia is following in your footsteps. She was kneading dough, while I shaped Cinnamon rolls. I told her she could start to work on the buns.  She was happy as a clam...and then I heard, "Mom, look! I made a bohonkus!" - Yep, she'd made realistic "buns"....nice replica of a rear. I'd said buns. I didn't get a good photo. Maybe she'll do it again....it was HILARIOUS...and realistic.

We moved the basketball hoop down to the common area. Great suggestion, Mike. This gives the kids much more room to play, removes the chance of it falling on neighbor's cars (they parked under it), and makes the common area more communal. 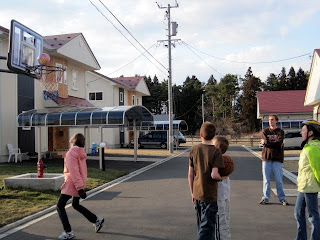 This is Nolan, mom. 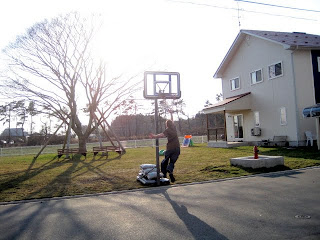 This was so cute! Zander was willing to be the basket so Stacia could get one in. Believe me - we don't always have this sort of team work. 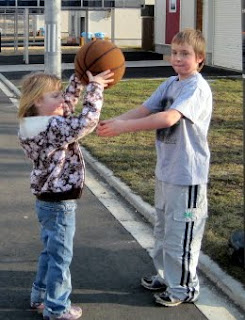 I headed in to make dinner. Stacia asked to make brownies. Why not? We bake when we're dealing. ::snort:: I've learned that if I measure everything she is more than happy to assemble.  She's very intent. 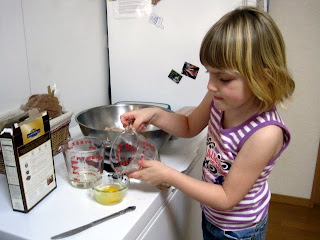 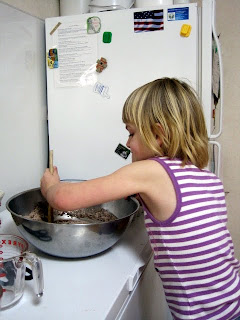 While I made popcorn chicken and garlic bread, she dumped and stirred and CHATTERED.  I took a couple of the chicken breasts and adapted the Nikujaga recipe (chicken broth, breasts, broccoli instead of beef and taters). Jared added slivered almonds at the table and it tasted suspiciously like Almond Chicken. Yum.   But WAIT...what is THIS????? When did the chocolate get on her mouth? 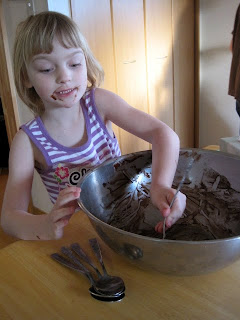 She's gotten the batter into the pan, grabbed spoons and invited all to come lick the bowl. ::snort::  All I had to do was measure oil, water, crack an egg and put it in the oven.
Stacia cracked us up at dinner. She was very proud to have made brownies. She could barely contain herself and kept wanting to bring out the brownies. It was finally time.
I cut the brownies, and asked her which piece she would like. 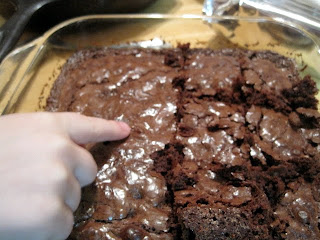 This was our first real 'at home' day since Mike left. I suppose that's why the fact that he's gone for a good long time hit today. We're settling into a very nice routine. We're accomplishing a lot in our school realm. Arielle sprained her ankle and I made her stay down most the day. Jared is making a conscious effort to spend time playing with us. I had a few ministry calls and emails. I found my Bible study workbook so I won't have to do it over before Friday. I told the older kids that I'm at a deficit for adult conversation and they have to begun TALKING TO ME.....no deficit with the younger set. ::snort::
All in all a full and fulfilling day.
Choosing Joy!
©2010 D.R.G.
~Coram Deo~
Living all of life before the face of God...

Joyfully Penned by DeEtta @ Courageous Joy at 4:46 AM 9 Gracious thoughts