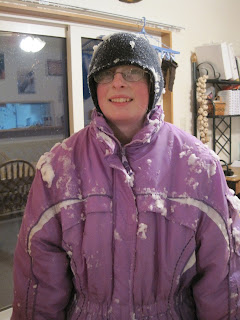 The picture says it all. The snow continues...it's wet and heavy.

I had a HILARIOUS conversation with JAL - I tried to explain that I needed to know if they would refund the ticket if I can't fly tomorrow. She and I were not communicating. It was hilarious when I tried to spell my name......she could not hear me saying "t" until Jared finally said, "T like Tokyo". ::snort::  I called Kim and Kim called the JAL office in Tokyo. YES! What a wonderful solution. I'll call JAL at 6:30 a.m. to find out if my 9:30 flight is going.  It's an adventure.

Joyfully Penned by DeEtta @ Courageous Joy at 2:17 AM 2 Gracious thoughts