Michael and I are up - as he walks off either a gall bladder or liver attack. He has new tests in the a.m. and is not feeling good now. We're looking for distractions. The beautiful country of Japan is cooperating.

You know the saying about how dogs can sense quakes coming...not so sure about Yuuki....but as it intensified she came to Michael to be held. LOL  There's been "quite a few" this afternoon - though really there were 5 - 10 AN HOUR like this this time last year. 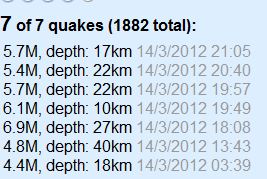 During the 6.9 one Zander was in the bathtub.....as it kept going he yelled, "I'm OK...I'M STILL OK IN HERE!"   He told me later he was a bit worried he'd have to run outside naked or one of us would come in to check on him. ::snort:: The sirens out here were going off - and the loud speakers we can't understand. I get emails from the city warning system in English, but Zander wasn't sure what was about to happen. We had a 2 ft tsunami watch.  I was saying Sunday  in honor of the one year mark I would take the bungee cords off the book shelf over my laptop - maybe not. 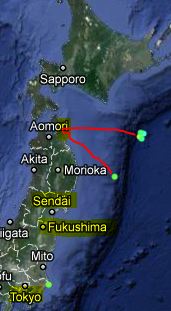 "Our quakes" have centered in the typical spots.....we live almost directly under the "r" in Aomori.  Kinda shows you how far we are from Tokyo too. About an 8 - 9 hour drive.

I've discovered this past week  Michael makes a much better "labor coach" than I. I have learned, however,  he doesn't really need a lecture on the sovereignty of God in the midst of the pain. Come to think of it, I would have smacked him if he tried that when I was in labor. ::snort::

Joyfully Penned by DeEtta @ Courageous Joy at 5:19 AM 3 Gracious thoughts