Mom G has a doctor's appointment today. When we all go places we need two vehicles. She simply can't vault into our van.  We decided I would go in early with the kids and we'd explore the town a bit.   Michael would go across the river and bring Mom G to town. I would meet them at the doctor's and the kids would continue to play on the beach until the appointment was over. Then we could all enjoy dinner together in town before coming back to the woods.

Our first stop was Beachfront Park. It was a bit foggy, but the walk was a good one. 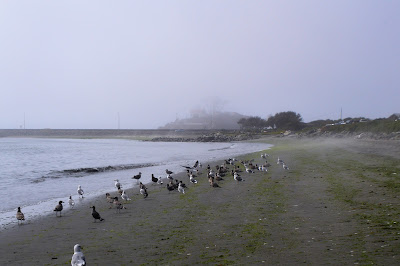 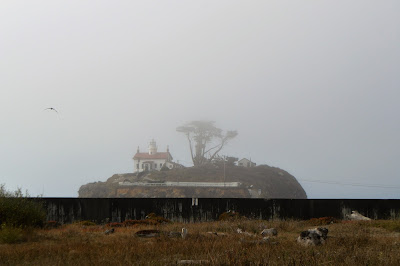 We walked on over to the fishing pier. We've wanted to do this and never quite make it. There are a couple of picnic tables out at the end of it...we queried the fisherman and Stacia made plans for future trips. We were also told there are Halibut to be gotten off the south jetty. 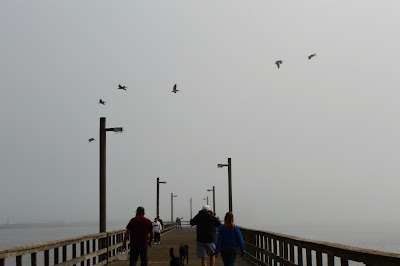 I realized I had forgotten to print and bring Mom's blood pressure readings. I called Michael and they were just leaving the house. They swung by the Caboose. It turns out one of the boys had borrowed Michael's keys and he had no trailer keys. I had left a window open (bad Mom) and Michael was able to climb inside.

Battery Point Lighthouse in the fog 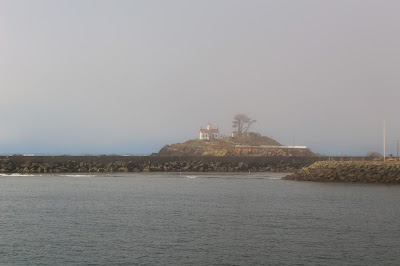 I dropped the kids and Josiah off at Pebble Beach and told them I'd be back in an hour. Unfortunately, things didn't work quite as smoothly as planned. We arrived about 20 min early for our appointment. There had been some mix up with the timing of the appointment. They called to reschedule, Mom asked for the same time, they had us down for an hour later than the original appointment. Michael and I had no note of any of this. ::snort:: We were an hour and 20 min early.  The doctor, however, was running over an HOUR behind schedule....so we waited over 2 hours....The kids got lots of beach time in and were concerned something had happened.

Mom had recommended Fisherman's Restaurant on our drive past one day. We stopped in for dinner.


We enjoyed catching up with each other over dinner.