Look at that FACE!

He's engaged. He's interacting. He's fully in the moment. This alone makes me smile. The reason for his interest adds extra joy to the moment. He's taken an interest in school after my repeated warning that this is the very last year I want to teach 1st grade to him (and we're really finishing up kindergarten). He showed Mike his math and told Mike he could count to 20.....and then he continued to 110 before he said, "That's enough."

Yes, yes, yes!!!! I've prayed that learning would become an obsession one of these seasons...and I think we're finally there. I'm not so excited about some of the other focus' of his life...but this one is one I love. We've been waaaaiting for this moment, and now we'll seize it. I predict he finishes kinder and 1st in the next six months.

And the name is....
Jen Guyer! Jen, you have a week to send me your address. Thanks to all who shared their snow stories this month in our January Giveaway. We enjoyed reading your stories. Jen, you can re-enter the giveaways in April.

February's Giveaway is in my mind. As soon as I have time to purchase the items and write up the blurb, I'll post it. Keep watching, I hope to have it up by the end of the weekend. 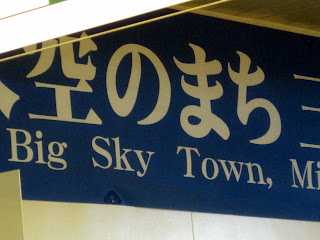 Mom and Cindy, this sign is for you! Look! We're finally back in Big Sky Country....all the way over here in Japan. ::snort::