We have repeatedly heard emotional and medical stress cause the symptoms of PD to take leaps and bounds in the direction we are attempting to avoid. The neurologist told us last week "maybe" some of the symptoms will lessen when the stress lessens....

I knew Michael was having more difficulty swallowing the past month and seems to be coughing, sputtering and choking more often. I did not put the dots together. The therapist said it is normal to lose ground during emotional and medical stress. I guess she thinks he's lost some ground. She suggested we put therapy on hold until we have the estate stuff under control, and it is no longer on his mind. She said the swallowing, the voice and more could all be temporary setbacks which will improve as stress lessens.  She felt  trying to push through with therapy while Michael is dealing with medical and emotional stress is counter-productive; it produces it's own stress.

Now, I should probably note we don't feel unduly stressed. We are practicing self-care. There ARE a whole lot of things going on - as there would be sure to be with a messy estate situation to figure out, losing a mom, and a mother-in-law fighting cancer.

Medical stress?  The neurologist told Michael the dystonia and increase in tremors, swallowing difficulty - those are Parkinsons. He said the other stuff is causing medical stress and to get the Primary Doc to figure it out. He stressed (see what I did there?) the importance of eliminating medical stress. Um..... 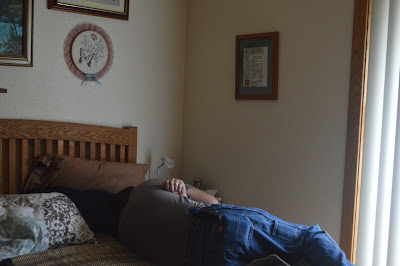 In December, Michael developed a rash. Around the same time he went from 4-6 hours of sleep, to 10 - 12 hours a day and feels EXHAUSTED ALL THE TIME. He's using the CPAP at least 8 hours a night.  Then came joint pain - in pretty much every joint. It's not the Gulf War/Fibromyalgia stuff - that is muscle pain, and he has plenty of that as well. 😒 At rest, his JOINT pain level hovers around 5; getting up and moving ratchets it up to 7-8. He's a good sport. Six months ago, he was told they don't like to give vets pain pills. They told him to take Tylenol. At that point, resting pain was around 3. Today she said, "Tylenol isn't helping at all, is it?" Um....She told him to switch to  Naproxen. If it helps, she knows it's inflammation. They also did labs and are talking about a referral to a rheumatologist. She can think of  two kinds of arthritis which may explain the craziness since December.  I helpfully shared if the VA isn't going to give relief for chronic pain, a vet is sure to self-medicate. This IS OR after all.

We don't want to add any type of rheumatoid arthritis to this picture, but we do want answers. We are not sure where this road is going and your continued prayers are appreciated.

Note: Michael felt some relief with Naproxen - showing it probably is something to do with inflammation.