Guess what we'll be watching the next few days? You can go here and track a flight....watch the plane get closer and closer.... it works great within the states. I'm not sure how it will do on our overseas flight, but we'll give it a shot. They say they can do many European countries....and the map shows Japan....Thanks for the link, Michelle. I'm smiling big to know that Cory is home from boot camp.

Photobucket's ads....and I contacted them repeatedly....finally pushed me over the edge. I'd HEARD that Picasa made you PAY for storage and PB was free....true...HOWEVER...the big busted lady laying across my upload screen had to go. I have a son that likes to blog and we were both done with trying to bounce our eyes from her image. He hadn't blogged in weeks due to the ridiculous ads. They refused to play nice. They'd remove her and then put her back up there....with the text "Play now, my Lord"...give me a BREAK!

Mike told me to pay for Picasa and be done with ads. Yes.....you can STORE your photos and have NO ADS whatsoever! NONE!!!! On blogger you CAN upload them through blogger - but I find that to be clunky. I can also go to the web album and grab a link (just like PB) to install in to a blog post. I discovered that it is ONLY $5 for 20 GB of photos...that's CHEAP and certainly worth ditching the obscene ads. I've seen the blog as "my hobby" and determined it would be free - templates, photos etc. Mike sees it as a family history and now wants me to figure out how to print it (OUCH) and said I should not worry about paying for photo storage. I love that man, all the time...but you know. LOL

I also downloaded Picasa 3. This is a free editing/storage photo program. I like it. I'm not sure how to get it to organize the way I'd like...but check out the buttons at the bottom of this shot.... 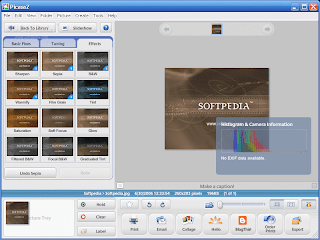 After my photos are loaded to my computer and edited....I can hit the email button and the photos are emailed....I share the photos in a variety of ways right from my photo storage/editor....

I can simply hit the little blogger button and it takes me to a blogger post form.....with photos loaded. I no longer HAVE to store photos online, I don't have to go get a link....this is a huge time saver. I've played around and can do at least four photos in a post this way. If you see the above logo at the end of one of my posts, it means that that those photos were loaded via the free software and not from a web album.

My blogger/Picasa albums were at 98%. I figure I could load another 6 - 10 photos before I had to pay. I'm not sure I NEED a web album.....as I can post from the software...BUT Jared uses the same photos and if I sync the album to the web, he can access them from any computer. I didn't mention THAT feature. I don't have upload photos....I can load the photos to Picasa on my computer, click "sync to the web" and all the photos are THERE, ready to be linked or used or viewed by others. It's very quick. This works well for us. I could have created another email address and gotten another account for free...but for $5....I'm so thankful not to deal with the PB ads....and this is much quicker than PB. I'm happy. I'll PAY $5 a YEAR to avoid ads. After Christmas, I'll read some tutorials and find out how to get the most out of the software. I figure I'll limp along through December and figure it out so that 2010 photos are organized correctly.

Tags- names, dates, locations...and they'll map your photos on a google map if you want...lots of fun thinks I COULD do, but for now, it lets Jared and I blog without the smut. We like that.

Now, I really better get ready for Akiko and company tonight.....and maybe I should figure out where we're going to sleep four big children. LOL 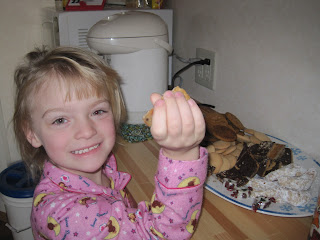 Can you believe it? TRAYS of goodies. One very nice perk of being a minister's wife is that I don't have to do any Christmas baking, if I'm feeling harried or lazy. And I often am. ::snort::

It began exactly a week ago. This tray has not been empty. I assume it will be empty tomorrow....so I may have to actually bake...but the kids have been suitably impressed.

"Where did THESE come from?"

"Did you have Bible Study again?"

Since we don't often eat big amounts of refined sugar, flour et al....I don't overly worry or ration these. It's a perk.....hey, there are tough things about being a PK (Pastor's Kid), tis the season to enjoy the perks. Unlike, monetary gifts, the Air Force has not yet required us to turn over our trays of goodies. ::snort::

Such fun.....I haven't started my car in days and thought it would be good to do so and to warm it up. Unfortunately, the doors were inadvertently locked...... with the keys inside. 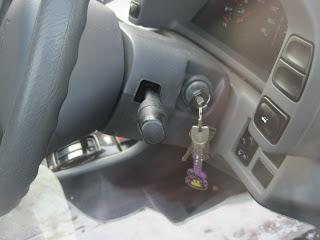 Jared to the rescue....eventually we got a door open and turned the warm car off. 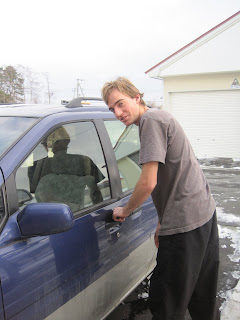 The Suitcase is OUT!

Bre has taken her suitcase out.

Pray for her....she is going to be on an incredibly TIGHT schedule to clear customs, buy her train pass, take a train to Tokyo Station and hit the Bullet Train to Hachinohe by 8:00 p.m. (last train of the night).

Ryu and Kim (I LOVE THESE FOLKS) are on standby. If she misses the Shinkansen (bullet train) she'll call them, they'll bring her home to spend the night with them, and put her on the Shinkansen from a station near their home on Christmas morning. I'm MUCH more at peace knowing she has a backup that's better than "sleeping at the Tokyo station".

The other kids will spend the night at a hotel in the Haneda Airport and then fly out the next a.m. for Misawa - compliments and directed by the USAF. ::snort::