I woke up at 2 am to HOWLING wind .... I sleepily thanked Jesus that we had run errands and bought groceries yesterday. This was my window this am
This photo shows the strange snow patterns caused by our ENE wind.
This is my car UNDER the carport!
This is the road in front of our home.
This is the road in front of the driveway (big van) and the neighbors garage.
Front Door which we FORCED open
Snow INSIDE our play room, that's CARPET under the snow. :: Snort::
After the neighbor got stuck, Nate and Jared helped push and dig him out .... and then they shoveled a bit of the road.
I have been thinking this isn't a "big" deal. Mike seemed to think I was exaggerating when I said I thought we were having a blizzard. I am scheduled to fly out tomorrow a.m. for OKINAWA - a TROPICAL ISALAND.

MOPS has been cancelled for tomorrow. I went outside and the snow is blowing so much you can't see. I was glad to take photos and bring them in and see what it's like out there.:: snort::

The neighbor told me that we are NOW to have a white out - and it is. That we are under a blizzard warning this afternoon and evening - expected to get 26 inches. This is the start of the storm. Rodney called Windy and said the commissary is closed, schools are out, the base is closing and all are being sent home. Um .... this is expected to be a big one.  This forecast doesn't really do the outside view justice..... 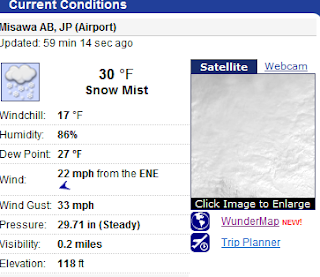 I've been told that Japanese Pilots will fly in "anything". I wonder. Do you think I'll make it out tomorrow? I wonder who to call to get advice. What do I do if I lose a $700 ticket that was paid for by regional funds? I can't afford to just chalk it up.....better make some calls....and pack, I guess. ::snort::

I slept well last night and woke up at 5 a.m. I had a couple of hours to work on the workshop I'm presenting at Faithlift.

Arielle, Jared and I headed for the clinic at 8:50am.  We checked in for Arielle's ortho appointment right on time. Then discovered she didn't have an ORTHODONTIST apt. My calendar said "opt"....I didn't have my reading glasses....and thought it said "ort".....

We headed for the basement for her apt. She made it in time. We had our day planned so we could finish Arielle's apt and head to Jared's apt.  WELL.....the optometrist wanted to talk to me, and  wanted to dilate Arielle's eyes because her eyes have gotten worse again in a short period of time.  I left her in the office dilating to check Jared in.  The Optometrist said we could do it that way as the apt was going to be 40 minutes longer than we were told.  I plan to research some eye exercises to slow down the progression of her visions demise. Anyone ever done anything like that?

They wouldn't let Jared see the doc alone (he did 3 months ago).  I had to stay with him while the 12 year old was alone at the previous apt.

We checked at dental. I wanted to SHOW them the note we had saying Jared has an appointment to have his wisdom teeth pulled. Nate had tried to change his Good Friday apt. for me and they insisted I'd not made the appointment and that he needed to see the oral surgeon for a consult before we could schedule the extraction. Um....we HAD the consult on 19 Feb. Turns out they scheduled ZANDER to have wisdom teeth pulled on 2 April instead of Jared. Zander.....they said, "Well, how old is he? Does he need them extracted?" He's EIGHT! SO....they straightened that out. ::snort::

We picked up Jared's meds. The pharmacist instructions don't match the written instructions the doc gave us. Not sure what to do about that. I decided to follow the docs instructions. When in doubt take the smallest dose. ::snort::  I'll take care of that and figuring out where to get Arielle's glasses tomorrow. Twyla, email me the name of that place you were happy with if you see this before I reach you.

It was a funny day at the base.

OH - went to get mail and couldn't get the box open. They watched me try six times. A really nice gentleman came and fixed it...oiled it, cleaned it and changed the combo as it won't work. LOL

We came home, switched out kids and headed for the base again.

I had a PWOC meeting. FUN to see some of  "the gals" quickly.

Stacia, Nate, and I replenished the pantry in preparation for my next trip.

We all went to Vikings tonight for yakiniku. We sat Japanese style and enjoyed the meal. It was a treat to run into Kristin as I'll miss MOPS this month.

Well - that's the day. Tomorrow, we'll try to find something fun to do, I'll finish the laundry and repack.

Joyfully Penned by DeEtta @ Courageous Joy at 2:39 AM 5 Gracious thoughts