Michael and I didn't get to take advantage of respite time last week.  This week I had agreed to help Bre out during our normal time. I thought this would be o.k. - but it wasn't. It turns out taking respite care for a caregiver to go watch grands isn't really respite - or some such thing. SO....Arielle agreed to come early and Michael and I went out to breakfast. Then we drove around an area of town we haven't explored before and found a great place for cross country skiing next winter....a long, long time from now.

Michael swung by and picked up a chai tea for me and then dropped me at BreZaak's. Bre took Jojo and Bella for well child check ups....and vaccines. Bella is old enough to anticipate what is happening. This was a game changer. Poor thing. I can guarantee Annie, Gideon and I had more fun at home. 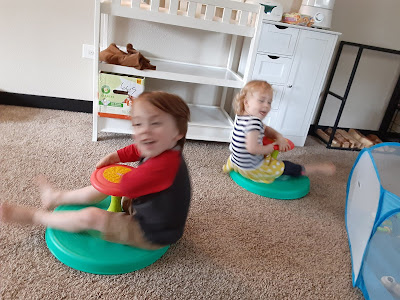 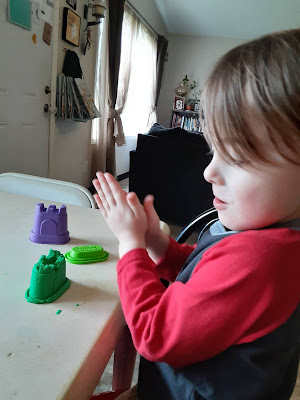 And SLIME! What's with SLIME? Gideon was NOT impressed and it took us about 8 wipes to get it all off his hands.... 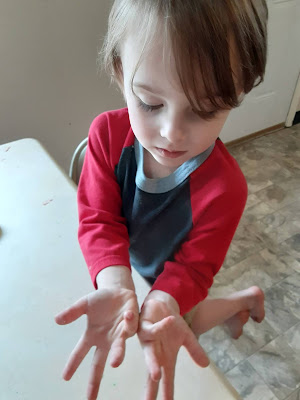 meanwhile, iM the other part of the house Annie explored with makeup...such an artistic use of eyeshadow. 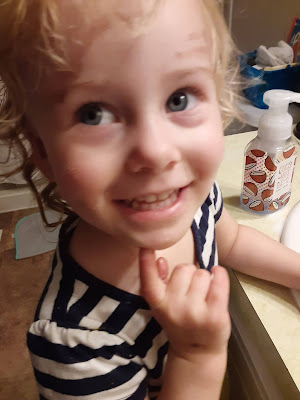 We had a blast. We played until we dropped - and then Bre was pulling into the driveway with the brave kiddos. We'll switch kids and repeat in August....
I threw a frozen pot roast into the instant pot. Just as it was time to start prepping veggies, Michael came in and said he thought we were having Dutch Babies for dinner. Ooops. He had suggested that last week for dinner...and we didn't make it happen.  He had mentioned it again last night and I forgot....we were happy to switch gears. Breakfast for dinner it was....and I'll put the roast in the slow cooker when we leave at 0900 to shop for wedding things. This worked out well.
I stole a few moments to sit in the garden. The seeds Stacia and I planted last week are just starting to germinate. OK - only THREE have sprouted but there are sure to be more. LOL 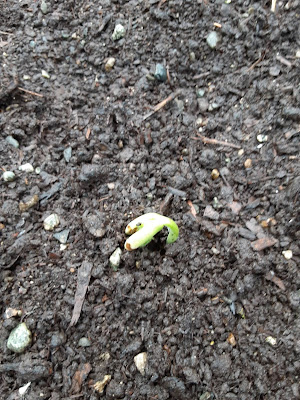 We had a rousing conversation around the table...sharing our memories of "The Tohoku Quake and Tsunami." We are all aching to go back for a visit. Stacia would like to do a gap year in Japan. Anyway - we had fun remembering....and then it was nearly 10 p.m.
I did a bit of bookwork it's hard to find for during the day and then Nolan was pulling into the driveway and it was after 11 p.m.
G'Nite all - but really I should say moring as I'm 30 minutes into the new day...and need to take Alex to work in 4 hours. LOL

Joyfully Penned by DeEtta @ Courageous Joy at 12:20 AM 0 Gracious thoughts