I sat down to begin copying the blog to mail to Dad and Mom G and realized there is not a thing on here that isn't about food, health, or school.  I guess that sums up my life this week, but I usually don't send large amounts of that sort of post to family. So, what else have we been doing?  Usually, when I've not posted any "real update" for a week, I can check my camera and find out what we've been up to....... 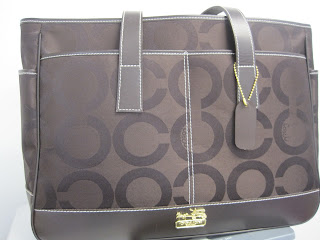 My friend, Tina, did the turn and burn trip to Osan last week. You fly out Monday a.m., shop in Korea that afternoon and fly back to Japan on Tuesday. She bought this purse which is JUST what I  have been looking for. Anyone know where I can buy this near Osan or Yongsan? I figure I'll take the photo when I spend a week in Korea and show it around the shops. LOL


This photo also reminds me that Tina has been graciously helping me all week with retreat stuff. Yep, local retreat stuff has filled my days.  We've got a great team and all are getting set up to keep working as I travel this month. Our retreat is the end of April. Tina is the chapel funds' accountant and I've been spending money all week. ::snort::


Monday night the kids had human video practice and youth. I didn't have Bible study. I WAS blessed when a 20 year old gal stopped by to visit with me. She came back Tuesday a.m. for Bible study. I love it.  I spent this time visiting with Chelsea and putting together a display board for the PWOC Spring Retreat. 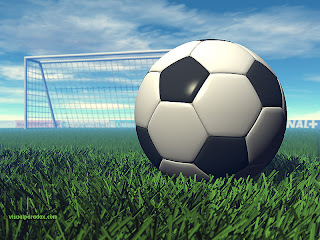 Jared has had 2 a day practices all week. He found out last night he's made the Edgren soccer team. No, he's never played soccer before but he's FAST and he's been working since his ankle healed to make it on to the soccer team. When he had to quit football he told the therapist his goal was for it to heal and strengthen in time for soccer. Goal met.  Jared's first practice of the day has been 0600 - we leave our home at 0520. I head to the gym. This has been GREAT for me.  The roads were clear all week. It's snowing today...and I'm glad that I won't HAVE to go in in the early mornings next week. I'll workout at home and let him ride in to do school and go to practice with Mike.
We've spent a bit of time trying to find size 13 indoor soccer shoes in the Misawa area.  Coach was going to order Jared a pair when he ordered the team jerseys but that company doesn't sell size 13 either. Evidently, tall boys only play basketball? SO.....we're still looking. He DID find outdoor soccer cleats.  Guess he can't play the indoor games. ::snort::
Tuesday we welcomed a darling baby to the Misawa Family. I won't post a photo as I've not asked his Mommy and Daddy.....you local folks are going to love little Ricky U the 3rd. 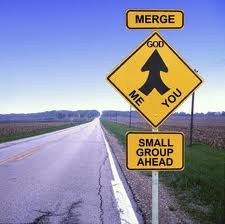 Arielle and a couple of her friends have been blessed to be mentored by a local young woman. They meet every Wed and encourage each other while they study about going deeper in their Christian walk. I love it. No, I don't attend and no this isn't actually a photo of their small group. 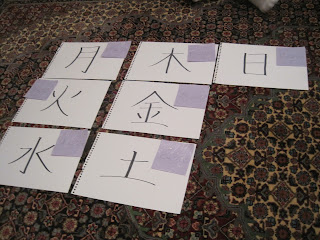 Akikosan came on Thursday. I fear I'm hopeless...but she loves spending time with our family and the kids are picking it up. Nolan has voiced he would like to live in Japan forever and be a missionary. I understand that feeling. 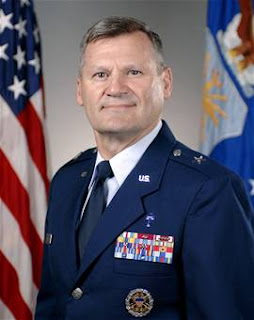 Friday Ch. Cyr (no, I didn't take this photo either) was our guest on Misawa and spoke at our Prayer Luncheon.  Friday was the first time I've been coined by a General....and the first time I coined a general. The chapel staff had dinner with Chaplain Cyr and CMSGT Johnson at Ohashi's last night. 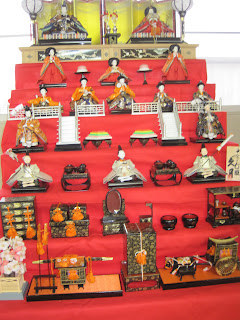 March 3rd is Hina Matsuri (Girls Day). Above is the display at our local nursing home. Yesterday afternoon PWOC visited to wish this month's residents Tanjobi Omedeto (Happy Birthday). This is always fun. We were especially happy to see how the residents were using the blankets we had made them for Christmas. No, this wasn't staged. We can tell they've been using them. 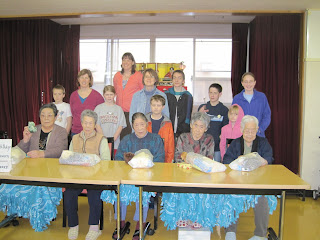 See the lady on the left? Everyone got a teddy bear and she got a frog? Her reaction was priceless. I wanted to talk with her....and realized I could say "frog wa nihongo de nan desu ka?" (How do you say frog in Japanese). We spent some happy moments as she tutored me on how to say frog.

In addition to the above we've been doing school.

I've been planning March's upcoming travels. I'll be flying to Vision Summit in DC, driving to Tokyo for a Ladies Retreat and then flying to Korea for Faith Lift.  I plan to take others with me on two of the trips - maximizing the travel benefits. LOL  We'll see how it works out.

It took me four tries to get the paperwork in for us to travel Space A to Korea. I plan to take the girls with me as I'll be in country a week in order to be there for Faithlift.  It will be a great time with the girls and I'll not charge the region a dime....so we all win. LOL

Seven days without any added sugar. That means honey, rapadura, stevia, refined sugar, syrup,  chocolate etc. I've even skipped my favorite Luna bar as it is chocolate and therefore feels like cheating. LOL


It hasn't been as tough as I've expected. I did find that I began craving tomatoes, squash and such on day 4. I hadn't decided, and still haven't, about the family's weekly ice cream treat. I'm not sure eating it will hurt me but it may make it that much harder going into week 2.


I've turned down MANY offerings of sweets from the kids this week....I keep reminding them, "Mommy is fasting from sugar for a month, remember?"  This makes me realize that they all KNOW the way to my heart is through chocolate. ::snort:: Time to kick the habit.


Weight wise - I've been to the gym 5 days in a row. I ate the same amount of calories but no sugar and lost 3 lbs. LOL 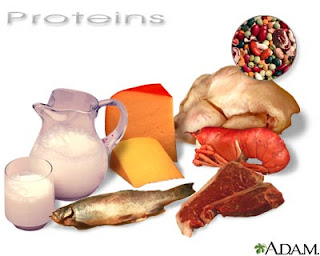 Americans seem to fear not getting enough protein.  When I went on the "cholesterol program" at Goodfellow and folks heard that I was eating huge amounts of vegetables and whole grains the most oft repeated comment was, "Be sure you get enough protein" and "What about protein"?  I'm limiting animal protein again - because it is high in cholesterol.  I'm eating whole grains, a variety of fruit and many servings of vegetables. This is a GOOD diet for any of us. I'm also limiting processed food and preservatives etc - eating clean - as it's good for us. Zander, especially,  does much better on a clean diet....spectrum issues.

BUT WHAT ABOUT PROTEIN?

This answer, found at answers.com, is representative of what the nutritionists and dietitians at three bases have told me.  I am writing this out so that I have a ready place to find the info when I'm checking up on myself periodically.  I don't care if you are in the "I must eat massive amounts of protein at each meal camp," that is fine...for me eating as I described above results in lower cholesterol and higher energy. I simply feel better (and I eventually start to lose weight).


The figure I was given to help my nutritional counseling clients was a person's weight multiplied by .4536 divided by 2 will equal the number of grams per day protein needed for optimum health. For a person who is morbidly obese, choose the highest end of a healthy weight range for this calculation. (pounds converted into kilograms multiplied by .5 = grams of protein)

I will add that the World Health Organization recommends the multiplier be between .45 minimum (for sedentary individuals) and .8 (very active). The US RDA sets the range between .66 and .8 with pregnant and lactating women at .88 to 1.1.

This would make that same 135 pound woman eating somewhere between 26 and 49 grams, depending on her activity level. If she were pregnant or nursing, that number would increase to as high as 67 grams.

A warning here; many protein supplements are not entirely usable in the human body. Be wary of protein powders (and even more the sales representatives that are pushing them) that encourage massive doses. These will most likely NOT be bioavailable and worse, will actually cause serious stress to your kidneys.

What about the protein? I only need 31 grams a day. My breakfast of whole grain steel cut oats, skim milk, and garden veggie patty had 26 grams of protein. Take away the patty (which I don't have often) and it is still 16 grams of protein. Over HALF of a days protein needs for me and not a bit of cholesterol or red meat/fat.  I have a variety of Luna bars and Kind Bars (all nuts - yum)...each has 9 - 12 grams of protein. I limit myself to one a day of these. That breakfast and one bar puts me OVER my protein requirements.  Before I even EAT ANY MEAT.


My family loves slabs of red meat - good on them.  I'm convinced I can get my protein needs without the fat and cholesterol. As a family we tend to eat more organic chicken and salmon than red meat. Even the "hamburger" dishes we love are made with ground turkey. We eat red meat once or twice a week.  They make up their slab of meat cravings when we eat out (on base as you don't find slabs of meat at Japanese restaurants). LOL 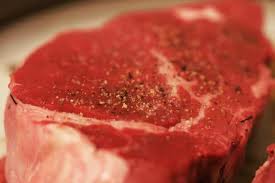 I have learned that an ideal snack will have a bit of carbs and protein - quick energy and long lasting energy....think apple and almond butter, crackers and cheese or peanut butter, celery and peanut butter....or a KIND or Luna bar which balances both without me having to think.


I wanted to check and SEE what amount of protein I really need and check a typical day to see if I'm getting it. I am.  I think most Americans get plenty of protein, way MORE than the USDA recommends.  Last night's edamame was probably a whole days serving alone. LOL