CROSSED THE BORDER - Day 4 of our AlCan Road Trip

Today is an exciting day! We are REALLY moving to ALASKA!😁 We got up early and crossed the border at Sumas/Abottsford crossing. It's open 24 hours a day, and we'd heard it took less time here than other crossings.
We got to the border as the guards were changing shifts. Michael pulled up and they asked for Yuuki's rabies certificate, their passports, and an inventory. They queried him about guns and ammo (which we'd shipped to Alaska).  Then they decided, rather than searching (Thank you JESUS - we'd heard nasty stories about RV searches), they'd have me verify Michael's info. I, of course, did not know this.

I pulled forward as he went through. They asked if I was traveling with the previous vehicle. No sense denying this as we have matching Alaska graffiti. I confirmed I was. They asked me a lot of questions about HIM....barely looked at OUR passports and didn't ask for our inventory list.

"Does he have any alcohol, ammo, drugs or tobacco in the trailer or RV?"

"How long will he be in the country?"


Still no smile. I was working hard for this smile. 😐

"Does he have a gun in the trailer or RV?"


The words began to slip out of my mouth, when I realized some folks don't take sarcasm well....and I stopped myself JUST IN TIME from saying, "No, but I have 20 bazookas in the Jeep." 😀😏😁

The lines were growing as we drove across the border....and the line coming into America was quite long. It was a Saturday morning.
Well, yes, I DID make a video - though I was informed I am not supposed to do such. My reasoning is  they would have signs posted if they didn't want me to video.

I tossed the phone as it was my turn to answer questions.

We went through some beautiful country today! 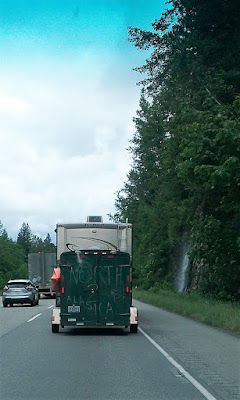 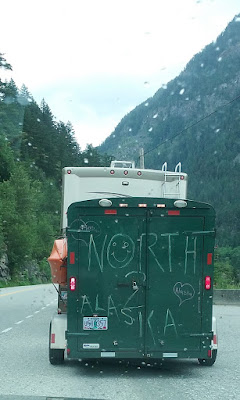 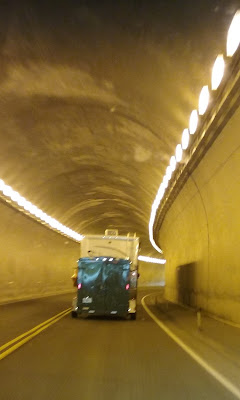 I turned the wheel over to Nolan - 3 hours is about as long as I can look at the back of Uchi before my eyes start shutting. I was settling in for a snooze, when I realized...if the airbag goes off I'm going to have my legs wrapped around my head.....Nimo is NOT an air ride as Uchi is....I miss the soft couches and legroom....but the scenery and discussions with Nolan make up for any discomfort. I will note,  when Uchi glides over a bump in the road, we take air! 😨 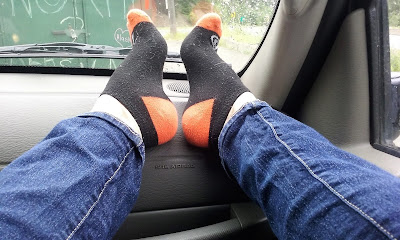 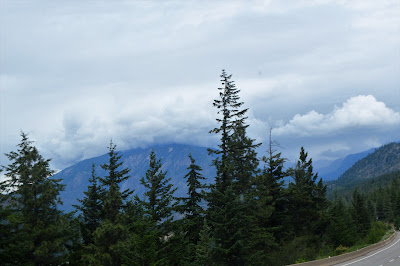 Yuuki approves of me driving in Nimo. She gets to ride on the dash! 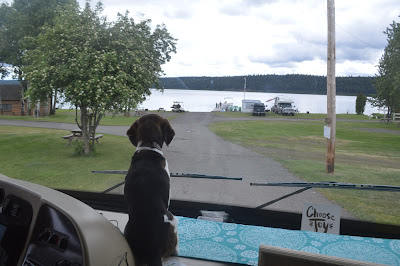 My man delivered! We pulled into a campground on the shores of Kokanee Bay at Kokanee Bay Motel and Campground. 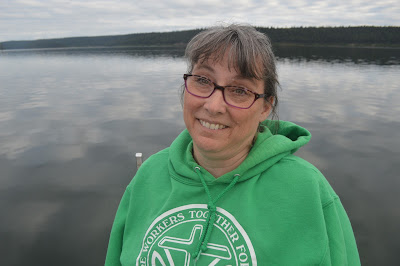 We saw two eagles flying over the bay....one with a fish in it's talons. 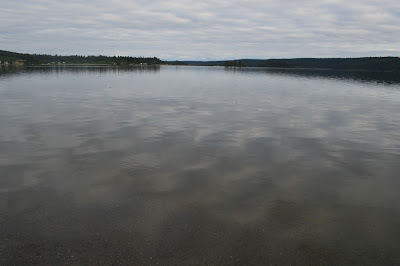 We drove up to the Hungry Bear Diner (we are getting per diem after all).  I did a load of laundry.  There was no internet to be had ANYWHERE in town. We've decided to stop at a Walmart tomorrow (surely we'll find one), and buy a Canadian pre-paid cell phone which will allow calls to and from America and a new set of walkie talkies.  Izaak gave us some, but we're having trouble hearing each other clearly with them. We've changed batteries several times. As we have no cell phones - we NEED a way to be in contact....flashing lights isn't working well.😉😏😕