It is amazing how well the day began.  The alarm went off at the designated 0300.  We were in the car and driving toward Mt Fuji by 0400 and arrived around 0600 - right on schedule.  There were already a rather large number of folks heading up the mountain, and the parking lots were showing it.  We ended up parking down from the 5th station a ways.  NBD (No Big Deal).  We were ready for anything.

Heading out at 0600 - ready for anything 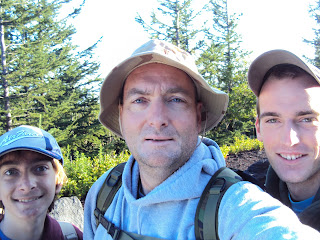 We each had three liters of water, granola bars, rain ponchos, solar blankets,  beef and turkey jerky, nuts, a modest first aid kit, warm clothes, gloves, and a camera.  Six hours up and 2 hours back down or thereabouts is what we were told.  We stopped in at the 5th station stores and purchased the requisite walking sticks and can of oxygen (in case we got a bit short of breath).  From there we headed down the trail - yup, a little down before going up, apparently. 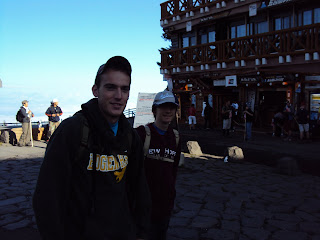 The first bit was fairly easy although we had quite a few hikers passing us as they were coming back down - they looked really tired, a harbinger of the end of the day, but we were fresh, eager and ready for the challenge. 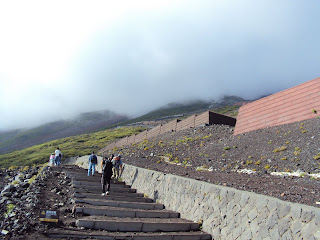 It was not too long before the trail really got steep.  In anticipation of this as well as an opportunity to make a pretty good chunk of change from all of the climbers, there were stations, little rest stops with a few items for sale set up at rather strategic points along the trail.  At each station, you could have your walking stick branded with a particular brand for that station for the modest fee of 200 yen - about $2.50.  They also have restrooms available for the modest fee of, yup, 200 yen.  You can also buy other items.  We understood there to be nine stations from bottom to top.  Since we were starting at station five, there should have been five total, right?  Nope.  We soon discovered there was a station 7 and a station 7.1 and a station 7.3 and a station 7.7 etc and all had a brand for your stick and things to sell and restroom fees to collect.  There must have been at least a dozen stations.

Stations on top of stations 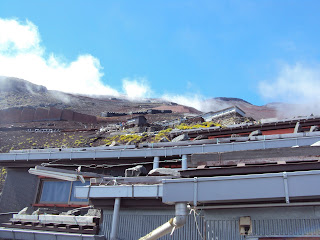 We also noted that the climbing got even more intense.  Not so steep that we felt the need for pitons and rope, but not too far from it either.  Nolan was laboring from the altitude a bit more than Jared or I.  He had, after all spent most of his life at or near sea level.  After the 8th station, the oxygen was a good investment.  The pattern became this: Jared would climb on ahead.  Nolan and I would bring up the rear.  We would all rest at the next station, get a brand - though not always - and do it again.  The last pull up the mountain was the steepest and the longest.  It seemed almost vertical, but by putting one foot above and ahead of the other foot, we were making it.  When we made it to the top, we could not find Jared.  As it turned out, he was over on the other side of the huts asleep in the sunlight.  We did not see him and began looking hither and yon for him.  We went to the crater, not there.  Began going around the trail at the top, not in sight.  Finally, we just sat down to think about it.  He would not have just headed down on his own - that is not how we do things.  He could have gone on around the rim of the crater either to look at the crater or to look for us.  We had been trading positions back and forth with three other people on the way up.  As it turned out, one of the men was the husband of one of De'Etta's PWOC presidents.  They came and sat next to Nolan and me, and yes, they had seen Jared going around the rim.  It was about ten minutes later that he came strolling in. 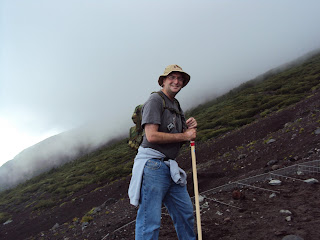 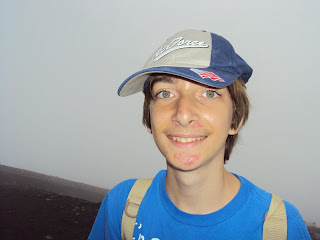 Note - hiking in the clouds 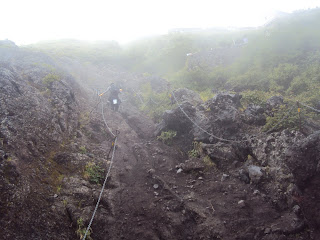 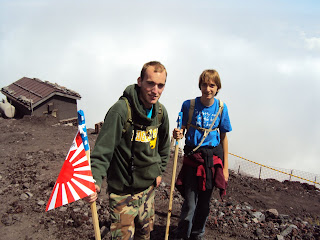 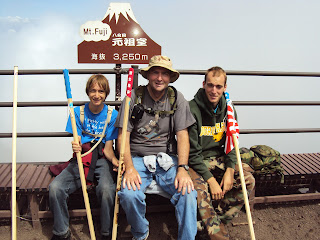 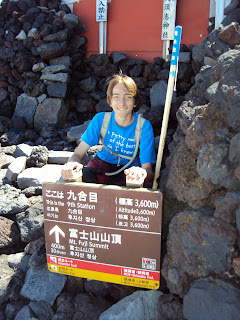 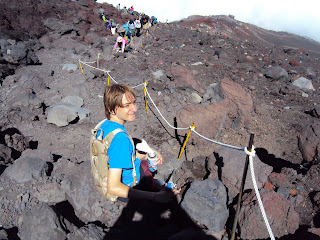 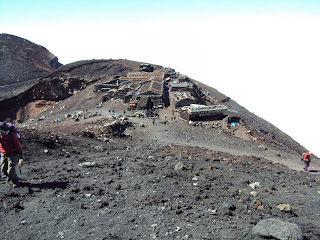 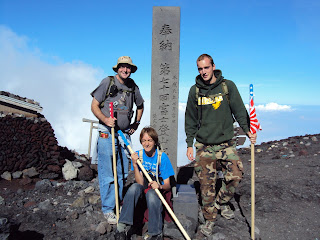 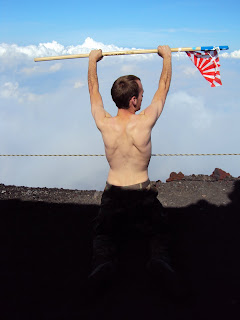 We had a bite to eat, took some pics (including Jared's standard "I have conquered the mountain" picture) and headed down the mountain for our car and for the hotel.  I would like to say that the story  ended in such a fashion, but alas, in all of the preparations, one bit of information was not quite reflective of reality.  The phrase was "you go down the mountain by a different trail than you go up."  So we began to go down by a different trail.  The critical point in the program was a place called "original 8th station."  There is a fork in the trail right there.  Its significance was not obvious until quite a while later.  Both trails indicated they were headed for the fifth station so...  Also during this time, I began to struggle with the descent.  My legs were just plain tired and really did not appreciate going downhill.  So, the going down was much slower than any of us would have liked.

We headed, slowly, down the "other" trail.  This trail morphed from a well-formed, criss-crossed, bulldozed trail into a 45 degree near-vertical plunge down the mountain - forever.  The only highlight of this portion was watching a rather foul-mouthed American do a header going down the 45 degree incline.  He was cut and bruised, but otherwise he was OK.  The entertainment factor for the rest of us was fairly good - I would give it a 7.5.  I had to subtract points for leaving the well-defined confines of the trail as well as for letting his arms flail about as he tumbled headlong down the lava-speckled mountain-side.  I did give him a point back for keeping his backpack securely attached although I almost subtracted another point because it broke up what could have been a rather smooth tumbling action, but as I contemplated this, I realized that it was probably this irregular tumbling action that eventually allowed him to stop instead of, say, accelerating until he had achieved some sort of land speed record.  So, in the interest of safety, I did not subtract anymore points.


Our Trail Down Looking Up 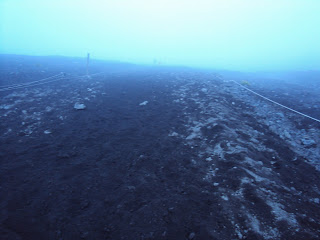 Because the day was getting late and sunlight was failing, we became even more anxious to get down.  Our second flashlight, apparently, went MIA somewhere in the journey.  Not good.  Add to my own struggles with fatigue, Nolan began to get a bit fatigued, as well.  AND add to this we began to think someone had added a couple of miles to the trail.  "When is this going to come to an end..."  was repeated on numerous occasions.  We kept seeing signs saying that the 5th station was just ahead so we knew we were on the right path.  Trouble is when we were finally able see signs of civilization, it did not look right. 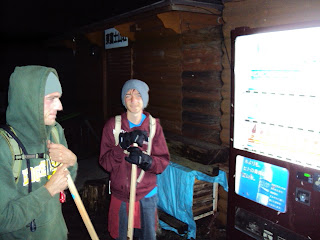 We plowed along for another 45 minutes to an hour.  When we finally broke out onto a paved trail, it really did not look right.  It was 2030. I had brought a GPS but the batteries had died way up on the mountain, and I was only using it to mark waypoints and get a few odometer/altitude readings anyway.  We got to the bottom and needed answers.  We pirated the flashlight batteries to run the GPS.  Plugged in the coordinates for our parking spot and lo' and behold it was 4.04 miles away.  WHAT?  Remember that phrase "you go down the mountain by a different trail than you go up?"  That was not necessarily true.  There are four trails going up Mt Fuji from very different directions.  Each of these trails begins at there very own version of the "5th Station."  There was a parallel path to the same trail we took on the way up, but it was not a "different trail."  Our trail (read: the wrong trail) ended 4.04 miles from where we wanted to be.  There were no trails or direct roads between them.  There were only two ways to rectify this: the first option was to return to that "original 8th station."  We were dead tired.  It was well past dark and getting cold.  Climbing back to the 8th staion was not happening.  So we did what any one would do in our situation.  When the going gets tough, the tough call a taxi. Yup, a taxi.

Jared volunteered to stay up with me to keep me awake and to help navigate.  Nolan volunteered to rest in case we needed him for some other catastrophe.  The entire trip was proceeding very uneventfully until we got to C1 - one of the circular toll roads in the middle of Tokyo.  Somewhere we missed a turn and found ourselves not where we needed to be.  I thought it rather mature of me to get off of the toll road and to stop and ask for directions, but I was not remembering this was Tokyo, Japan not Seattle, Washington.  Language was an immediate problem.  I stopped at three convenience stores and got very helpful shrugs from clerks at the first two.  The third had a little more English skills.  He also had a taxi driver come through looking for green tea to drink.  In broken Japanese, I explained the problem as best as I could.  In broken English the clerk did his best to interpret what the taxi driver was saying.  I was not completely confident I understood what they were saying, but with great assurance they pointed out various landmarks and how I should travel.  At this point, I only wanted back onto the toll road, but this was impossible, apparently.  So we headed out again.  In short order, Jared and I realized we were not getting anywhere familiar, recognizable or desireable.  Jared suggested something I had thought about, but had dismissed as somewhat "out there" for a solution.  He suggested that he hop into a taxi and have the driver go to New Sanno - all I had to do was follow the taxi home.  A taxi had saved our bacon once before on this trip.  They could do it again.  After a crazy drive through a labyrinth of streets following right behind this taxi through a thousand unknown intersections, we rolled right up in front of the New Sanno Hotel.  Who'd a thunk it...  All it took to conquer this 12,389 foot mountain was 23 hours, two taxi rides and chunk of change.  So that is how we climbed Mt Fuji. 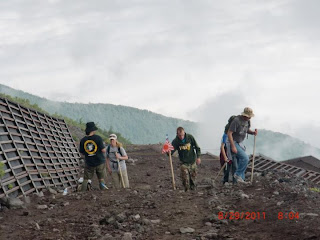 {Editor's Note - De'Etta here - Jared checked Facebook when he got home - and the above photo was already on Facebook. Once again De'Etta's network of PWOC and FB proves unbeatable. It should also be noted that I never doubted they'd make it home with adventures to share. }