The VA is compensating him for these diagnosis' as they are all service-connected.

I  We have felt odd TAKING the disability compensation - but with the dawning realization the pain Michael lives with is a direct result of burn pits, P tabs and/or Anthrax vaccines, I got angry. Then I prayed through the intensity of those feelings and realized, "They broke him." He wouldn't have the majority of these illnesses if they'd not insisted on the meds or sent him to areas with burn pits...and it is o.k. to be compensated for things we are told will be permanent and degenerative.

With the diagnosis of "Gulf War Illness" - a nebulous hope was born. Maybe the odd things Michael is experiencing can be attributed to THAT and not Parkinson's. It could happen.

We have come to greatly appreciate Dr. C and the Motion Disorder Clinic at the VA clinic in Portland, OR. Dr C's goal is to ensure quality of life for his patients. We realize now the treatment Michael had been getting all focused on motor skills (tremors and balance) and were pharmaceutical in nature.  Dr. C takes a more holistic approach to treatment.

He referred Michael to a Physical Therapist.  She wanted to meet with him weekly. Instead,  Michael diligently works at home, and we drive to Eugene monthly. She continues to point out things we'd sort of noticed....Michael's muscles are stiffening, and he has to fight to keep PD from causing his body to close in on itself. He does a lot of stretching. She has pointed out the things she notes which are attributed to PD and told him her goal is to give him tools to help on the bad days and to slow the progress of the disease.


Dr. C  also referred Michael to a Speech Therapist.  That seemed a bit out of place, but on 17 Oct we met with the speech therapist after physical therapy.  She asked a lot of questions, talked, observed and began to point out things Michael is experiencing in his speech which are classic Parkinson symptoms.  His voice is getting softer and hoarser, and he clears his throat often. She explained the effects Parkinson's has on the brain and muscles which control speaking and swallowing. As Michael's career involved much public speaking, she said it was normal we picked up on this early. We had asked a doc about this in 2012 - he said it was because Michael was intubated during surgery and it would go away. It didn't. He shared no other ideas when we asked again. I shared with Hilary (Speech Therapist)  Michael kept saying my hearing was going bad - and  I actually HAD MY HEARING checked. She had a good laugh and said often a spouse saying, "You need your hearing checked," is the first indication of PD affecting speech....but spouses don't usually go get their hearing checked. ::snort:: Of course, we didn't have the PD diagnosis when we were trying to figure out why I couldn't hear Michael.

She wanted to meet 2 - 3 times a week. We simply can't do that and be down here watching Mom G.  There are no "close" VA clinics to Crescent City. The one in Brookings is very limited in what they offer - mostly primary care clinics.  This means a 3 - 4 hour drive to each appointment from here. Sacramento would be 8 hours. We are stuck and not sure what can be done.  She gave Michael exercises to help various muscles improve muscle tone and to get his voice back to a middle range voice. All these therapists and doctors want to "have the discussion now," so we can prepare our thinking.  Hilary wanted us to realize  Michael could lose his voice - as in not be able to speak.  We'd never heard that possibility before. Since we are already seeing symptoms, we are going to work hard to slow the progress of PD. She assured him the VA has speech adaptation tools they will give him if he needs them.  She also mentioned there is a disconnect in a PD patient's brain - he doesn't realize his voice is soft (sounds loud to him) or that he's shuffling or his body is closing in - we will work on compensating. Well - that was CHEERY. I mentioned he's a preacher, and his voice is essential - she said they can give him his own personal amplifying system if we want it. We opted not to as he isn't preaching much these days.  What we loved about Hilary is she said, "We are going to FIGHT the progress of Parkinson's."

Realizing appointments 2 - 3x a week aren't feasible, the plan is to meet with her when we are in town for Physical therapy. Brookings will let us use "tele-health" on Mondays. We'll begin that soon too. Tele-health....we sit in front of a computer, she sits in front of a computer....the future in health care??????

Also on the 17th, Michael met with the respiratory clinic, and they changed his CPAP machine to the one the VA uses.

Dr. C and Hilary referred Michael to have a swallow test. We were able to do this in Roseburg (an hour closer than Eugene) today.  He has mentioned difficulty swallowing for several years, and the docs sort of glazed over and said, "Hmmm." Dr. C immediately sent him to speech therapy and she immediately sent him for this test.

I sat and watched the fluoroscope as he ate and drank various barium laced treats. This was one of those times you hope they figure out what is going on, but also hope it is really nothing. It was quite clear foods and liquids are getting stuck at the back of his mouth and on the little shelf by the epiglottis.  I am NOT into medical shows and *I* could tell things weren't going in the direction they are plumbed to go. I watched as he aspirated. It was obvious. He quit saying anything about his "swallowing problems" when the docs quit listening, and I'm thankful we have a new team who listens. Of course, they are listening for certain things and so clue in quicker than one would expect from a general doc. Michael has been having recurring bronchitis and occasional pneumonia every 4 - 6 weeks for the past FIVE YEARS!  We TOLD the docs this wasn't normal, but the standard answer was, "You're fine." As he neared retirement there seemed to be a sense that "older guys try to play the system to get disability as they retire." There is also a reluctance to diagnose issues which would cause one to be separated from service. This isn't a bad thing - it just is.  These factors are not in play with VA doctors. They have nothing to do with disability ratings or medical boards which would force one to retire.

Now we know why Michael has recurring bronchitis and/or pneumonia.  He was aspirating during the test - it's fairly clear he does during the course of normal life.  They gave us some "thickening" junk to put in liquids and foods to try out. She said he doesn't have to use it if he doesn't want to at this point....but Hilary will be calling and wanting to meet with him for THIS - there are exercises to help here too.  She said she could tell the muscles for speech and swallowing (and the tongue) are uncoordinated. They aren't working well together to interpret the messages from his brain. We are to get some "nectar consistency" liquid for him to drink - or mix this thickening stuff into his water, soups, ICE CREAM.  We're not sure how to work in another weekly appointment....it's getting harder and harder to make it all work from down here.  She also wanted to "have the discussion now...."

We are realizing, as much as we'd hoped this was all part of Gulf War Illness, Parkinson's keeps being confirmed. We could talk theology here - but let's stick to medical - this is getting long.  It seems the VA was right - Michael has a host of issues and unless God heals him - they ain't going away.

So, for "Let's have this discussion now" and "we don't want you to hear this for the first time when it's time to act," here are the things we've had to discuss....just in case....in the last month or so.

Frankly, I've decided I'd rather not have any further discussions on these issues for now. I'd rather pick daisies, count the leaves in the yard and eat M&Ms.....Or as Michael concisely frames it, "We'd rather enjoy denial a bit longer." ::snort:: Our medical team insists we not deny reality. A bit odd as the line had been, "You're in the early stages of this disease. You can do whatever you want. You have a good 10 - 15  years left."  If that is so - why NOT let us deny it all for another few years????? We like denial. We'd like to live by faith and not by what is seen.

There you have it - an update. This post is probably a major contributor to my case of Writer's Block.

We are fine. Nothing new - Michael has three or four degenerative diseases. We are simply learning how to live with all the new things which keep popping up. The neurologists keep stressing he's in the beginning of this  - but it sure feels like things are happening quicker than we'd like. We kept hoping the swallowing and voice and even some of the muscle things were all from the Gulf War Illness.....but we've been assured they are all part of Parkinson's and it's time for us to quit denying reality. It's time to "FIGHT THE PROGRESS OF PARKINSON'S."

We appreciate your prayers as we try to figure out HOW to do this from HERE when our team is THERE.

*I apologize for the length of this post. I didn't want to have to write 10 or 15  "VA Appointment" posts to catch up! This one post just saved me hours of telling about specific appointments. ::snort::

Michael and I enjoyed our drive through the Redwoods this morning. The Redwood Highway is beautiful during every season - but the colors were beautiful today.  Redwoods and Firs stay green. However, the Maples, Madrones, Alders, and Ferns show off with yellow, orange and red foliage!  Our cameras were back in the trailer - but I grabbed some snaps with my phone. 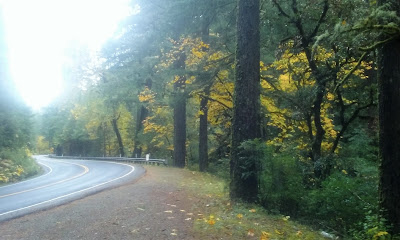 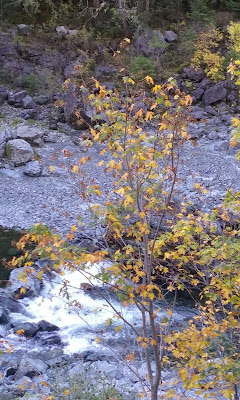 It took us three hours to get to Roseburg. This was the closest location for Michael to have a barium swallow test. We'll post some thoughts on recent appointments later..... Michael stopped for lunch at Pita Pit - I'm a happy Herbivore. 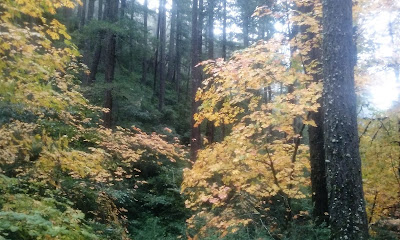 With the tests completed we headed to Grants Pass. We had hoped to get the oil changed, but didn't want to wait two hours. We bought some groceries, snagged dinner at Applebees, and  headed for the woods. 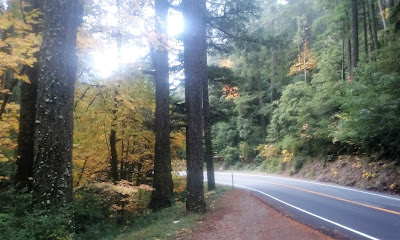 Unfortunately, by the time we left town it was RAINING and DARK.  Another challenge in addition to the normal narrow, winding drive.  Michael pointed out all the usual spots for rock slides. It seems this is a big deal around here in the fall/winter.  We enjoyed the day to visit and process, we got more answers, the fall colors were gorgeous - the rain and dark drive through the  Redwoods a bit daunting. 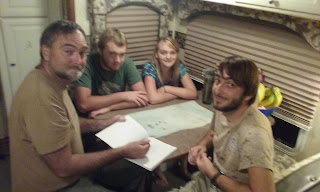 We're home safe and sound. These guys are playing Farkle....I'm re-establishing  the discipline of blogging.

The rain on the roof of the Caboose is welcoming after a day running around in the rain. LOL